Dive Report: Catalina on the Sundiver with Ocean Adventures

On Sunday February 13th, 2005 I went with Ocean Adventures to Catalina Island on the Sundiver.

During the week I had suffered through soaked "dry wall" from a leaking roof and theft of a dive mobile. The weather had been so bad at my house that I called Capt. Ray Saturday evening to make sure that I had not missed a call from the dive shop canceling the trip. I was pleasantly surprised by a forecast of "actually, it should be a nice day." Thank goodness! I needed to get away from it all.

When I arrived in Long Beach on Sunday morning, the weather really was nice. I signed in and met some of my fellow shipmates - mostly students doing their open water certification. At least five of these open water students were also marine biology majors who will continue on for research diver certification. 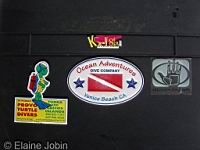 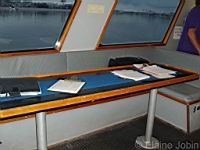 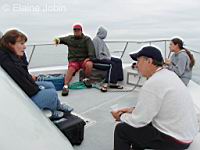 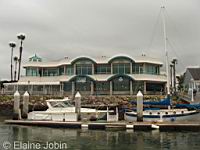 We had a smooth trip to Catalina and Captain Ray chose a shallow sandy area near Yellowtail Point for class activities. 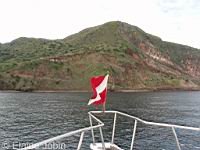 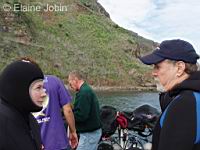 The boat was secured with both a bow and a stern anchor and we were off on our "Ocean Adventure". 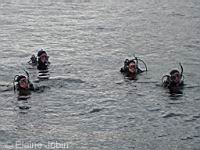 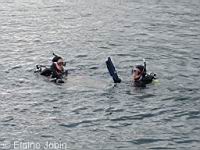 Visibility was terrific with a clear line of sight to the 30 foot bottom. I headed off for deeper water where I found visibility to be 50 feet or more. Half way into the dive visibility took a drop due to clouds of sand. I knew it wasn’t from the students because they were still in the shallows so I started my search for bat rays. A short time later I had some "bat ray foraging for food photos." These are a few of my photos from this dive.

I returned to the boat for my surface interval to find that many of the students were still out on their first dive. Captain Ray let me know that we would be at this site for a while. I off gassed, got the tank refilled, changed to a macro set up, and, jumped off the boat for more of this great diving.

I swam back to the same general area of the first dive to photograph some of the smaller sand critters that I had seen. One of the most interesting things that I found was a nudibranch that I had never seen before. I shot 26 frames of this Acanthodoris rhodoceras, aka "red tipped dorid". These are a few of the photos.

After this dive I learned that still had time to make one last photo run. Some people may not like doing repetitive dives in one place, but I love it because it gives me an opportunity to more fully explore an area. This time I went to the surrounding kelp covered rocky reefs. Same dive site, different terrain. An octopus lounging next to a rock was the highlight on this dive.

The octopus allowed me several shots, then, instead of ducking into a crack took off on a free swim. Wow, it was beautiful. I followed him with my strobes flashing away.

He stopped on a rock and flashed me an "I’m mad as heck" octopus red, so, I photographed that also.

This must have really pissed him off, or scared him, because he sent out a huge squirt of "ink" before disappearing into a hole. I don’t like to admit that I disturbed an octopus enough to make him redden and waste his ink supply on me. I could hide the photos and pretend that it never happened. Instead, I’ll post the fascinating event. If anyone can comment on the stress this animal faced please post a follow up for the diver.net educational archives. I don’t know how long it takes for an octopus to replenish his protective ink supply.

We moved to Eel Cove Reef for what was my fourth and last dive. The excellent visibility and nice easy diving continued. This site is a protected marine sanctuary with very photographic fish, eel, and lobster populations. Unfortunately, I was talking instead of paying attention when I loaded my film so my frame counter remained on "E" the entire dive. No photos:(.

Another great dive day was over. 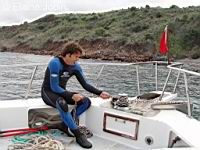 On the trip home the students focused on dive tables and log book entries. I photographed some divers using their dive tables for anyone who doesn’t remember what dive tables look like. (No they aren’t the large platforms located in the galley). 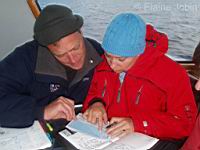 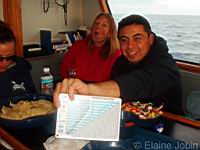 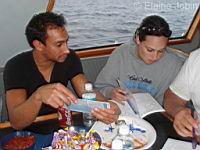 On Monday morning, the country western song started playing backwards. I got my car back, mostly intact and running. I sent the photos of the Acanthodoris rhodoceras to the Sea Slug Site and they have decided to feature this dorid as an upcoming "nudibranch of the week".

The moral of the story is to keep your priorities straight....... "When the going gets tough, the tough go diving". Thanks to Ocean Adventures, Captain Ray, and, the crew of the Sundiver for a terrific dive day!