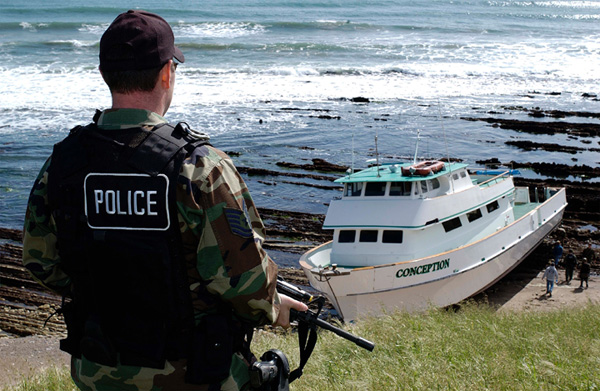 A thief made off with one of Santa Barbara's most popular dive boats early Wednesday morning, crashing into and partially sinking a fishing boat during an erratic exit from the harbor before the vessel ran aground in an area dubbed the "Graveyard of the Pacific."

The 75-foot-long Conception, owned by Truth Aquatics and usually docked at Sea Landing in the Santa Barbara Harbor, was found Wednesday morning beached about a mile south of the Vandenberg Air Force Base's lighthouse at Point Arguello, said Capt. Todd Fleming, a base spokesman. The area is known for its treacherous waters and history of shipwrecks.

Because Vandenberg is a top-secret military installation, security forces scoured the scene for the intruders. No suspects were found as of late Wednesday, but security officers did find a pile of wet clothing and some footprints on the shoreline. The suspects were thought to be walking toward Jalama Beach.

Conception, owned by Glen Fritzler, has been a part of Truth Aquatics' three-boat fleet since 1981.

"We don't know if she's a goner or not," said Joanna McLean, a Sea Landing reservations agent at the harbor in Santa Barbara. "We're still optimistic."

Don Rowell, who operates another fleet boat called the Truth, has been a skipper aboard the Conception in the past.

"It's pretty much a disaster," Mr. Rowell said. "They ran up on a sandy beach, apparently. Somebody who was very unskilled did it."

The $1 million Conception was reported stolen at 7 a.m. Wednesday, and three hours later it was spotted hugging the coastline north of Gaviota. A Coast Guard helicopter called to locate the vessel spotted it beached at Vandenberg in the late morning.

The Santa Barbara Police Department is investigating the theft, along with the Harbor Patrol, Coast Guard and Vandenberg security forces.

At the harbor, law enforcement officials are trying to determine how the thief -- or thieves -- got the boat out of the crowded marina. A Stearns Wharf security guard saw the white-and-blue vessel moving "erratically" through the water around 1 a.m., a time when most boats are moored for the night.

As the Conception trundled through the marina, it struck three other boats, partially sinking the Slick Chick, a 70-foot, wooden commercial fishing boat. No one was aboard the three other boats when they were struck.

The bilge pumps aboard Slick Chick could not keep up with the resulting leak, and the vessel slowly settled to the bottom of the harbor, according to Lt. Paul McCaffrey of the Santa Barbara Police Department. It's now resting at a 45-degree angle in about 20 feet of water, its masts and rigging tangled with another boat nearby.

Observers at the scene said the boat's owner heard the bilge alarm go off, and when he ran to the boat, the water was coming in so quickly that he only had time to grab a few items before abandoning the boat.

Two other boats, the UCSB Sailing Center's Boston whaler and the Gus G, sustained minor and moderate damage, respectively, but aren't in danger of sinking, Lt. McCaffrey said. The UCSB boat's handrail was gouged, and the floorboards are partially smashed in some areas.

Conception, with 550-horsepower engines powering two propellers, isn't a vessel that can be easily piloted by an amateur, Lt. McCaffrey said.

Mr. Rowell said the area where Conception is usually berthed is small, and in order to make tight turns, skippers use the wheel very sparingly while also running one engine forward and one in reverse.

"They knew enough to start the generator, and use the electronic shifters on the gear box, which are hard to understand if you don't really know what you're looking for," he said.

The boat, which has a cruising speed of about 12 knots, takes legions of divers on trips to the Channel Islands on day and multiday trips. It can hold up to 40 people, has a galley and is equipped for recreational scuba diving and island hikes.

The Conception's loss, even for a short time, could hurt the business as the weather clears and spring dive trips begin. Although April is usually a slow month, Mr. Rowell said, there are charters already on the books.

"Whatever they do to Conception, I imagine it is going to be in the boatyard for a while," he added.