Trip Report and Photos: Sea Divers Trip to SBI on the Great Escape

Story and Photos © Elaine Jobin, may not be reproduced in part or in whole without advanced written permission.

On Friday April 1, 2005 (April Fools Day) the Sea Divers boarded the Great Escape for their one day adventure to Santa Barbara Island. It was a calm, clear evening where a light jacket was all you needed to feel comfortable. 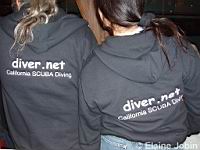 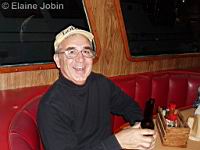 By weather reports, this looked like it was going to be the best dive day of the weekend. The wind and the ocean settled during each passing hour, and by the time our 2 am departure rolled around, conditions were great for sleeping through a smooth crossing.

At sunrise we were less than an hour away from our first dive site. Only 17 Sea Divers were on the boat so there was a lot of leg and tank room. Instead of the usual mouth agape "whoop pose" for the trip report, Will stuck out his tongue to everyone who didnĺt have the good sense to sign up for this trip. 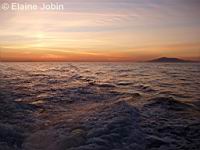 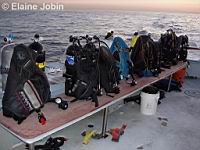 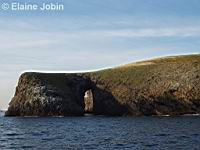 Our first dive was on a wall near Sutil Island. Topside the waves were crashing on Sutil and I wondered how good the dive conditions would be. A leap of faith off the boat produced a very pleasant surprise. Visibility on the wall was 50 to 80+ feet, it improved with depth. The areas of the wall beyond a depth of 50 feet were breathtaking. Bright pink Gorgonians grow in thick clumps. In a dry suit, it is easy to forget that this isnĺt a tropical dive site. Some divers had great luck here collecting scallops. Sheephead, sculpin, gobies, kelpfish, and an octopus provided entertainment.

Next we moved to a kelp covered reef not far from the rookery. A group of about 8 sea lions came and joined us on our dive. They swooped and twirled, chewed on strobes, and, pulled on fins. We watched their games of cucumber football and kelp stalk baseball. No diver suffered from lack of sea lion attention or photo ops. Chris and Kathryn found a juvenile torpedo ray and Bob found a nice rockfish for dinner.

Topside it became evident just how much fun we were having on this dive trip. 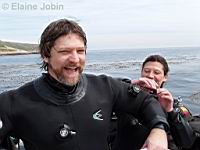 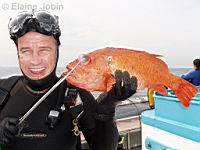 On this dive I had a gigantic pull on my fin. Instead of a sea lion, I found it was Dexter grabbing for my attention. He signaled that there was something wrong with his fin. I looked at it, and, could tell that the binding wasnĺt shut properly. I tried to fix it but I couldnĺt figure out how. It was a kind of fin strap that Iĺve never seen before. I signaled for him to stay calm and I pulled his fin off. I gave it to him so that he could show me how to fix it. Properly educated, I put the fin back on his foot and snapped the binding shut. With a smile and a thank you Dexter was off enjoying the rest of his dive.

The fourth and last dive was also at Brittle Star Reef. It was a beautiful and peaceful kelp forest. Brittle stars, gorgonians, and kelp covered the rocky undersea formation. Fish life was diverse and plentiful. A sea lion sentinel occasionally cruised by, patrolling, not playing.

After this dive, we settled in for a smooth cruise back to Long Beach. 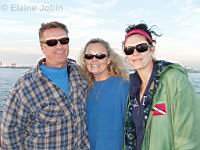 We were joined by numerous kelp flies during our dive stops at Santa Barbara Island. Those who used the trip home to sunbathe spent much of their time smacking and stomping the flies. Iĺm not sure who won the "fly stomping" contest on the top deck but I think that 8 flies killed with one foot stomp was the record.

Capt. Tim, Capt Kim, DM Steve, and Kym in the galley gave us another perfect dive trip. Thanks Capt. Tim and Kim for beating the Pac Star to our dive sites.

For everyone that didnĺt go, you are really sorry, because, you missed a good one. It was the kind of dive trip that leaves you feeling really good the next day. Life is suddenly back in perspective. 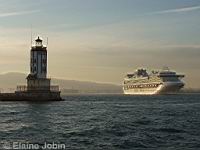 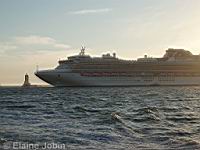