Story and Photos © Elaine Jobin may not be reproduced in part or whole without advanced written permission.

On Saturday, I went out for a day of diving on the Pacific Star. Hollywood Divers had chartered the boat to Catalina Island.

When I arrived in the parking lot, crew members were standing at the gate - ready to serve as "dive sherpas". I pulled up next to them, I took my gear out of the truck, and, it all magically appeared on the boat. They left me with nothing to do but park the car. These guys are amazing. 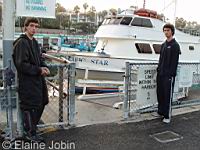 When I boarded the Pacific Star, a Continental Breakfast was available during sign in - bagels, muffins, cereal, orange juice, coffee and tea. After completing the paperwork, everyone congregated on the back deck for the "boat briefing".

Shortly after leaving the harbor the breakfast menu appeared on the galley board. Four choices were offered:

I ordered the Country Breakfast and for a while it seemed like I was at a Café instead of on a dive boat. My Country Breakfast came complete with an orange slice and a parsley garnish. I grew up on the Southern East Coast and the grits on this morning’s menu were amazing. Everything else was good too, but I especially liked the grits. Below is a photo of the Belgian Waffle Plate.

During breakfast the boat slowed as we entered a fog bank. By the time we were done eating we were back up to speed in an amazing wide gap between two clearly visible walls of fog. The sunlight played tricks with the moisture and it helped me to understand how the legends of "Ghost Ships" originated. 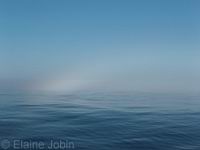 Finally all of the fog cleared. Our next treat during our crossing was a huge pod of dolphins splashing around a bait ball a short distance away. Some of the dolphins strayed from their social eating activities to play in the bow wave of the boat.

Upon arrival at Catalina Island our first dive site was Eagles Nest. The site is named for two Bald Eagles that make their nest on the top of the hill here. With a 300mm lens I was able to capture a legible photo of the eagles. 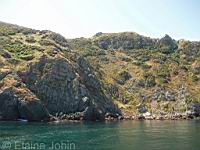 The water at Eagles Nest was green. Large particulate matter helped to cloud the visibility. Visibility in the first 30 feet of the dive was only 15 to 20 feet. I found that the visibility improved to 40 feet and beyond at about 80 feet. The gorgonians at Eagles Nest are colorful and plentiful. I found an Angel Shark in the sand at about 90 feet. He let me come quite close for photos without acting at all disturbed by my presence. On my way back up the reef I photographed a diver who was looking at a swell shark egg.

Even though visibility was down, everyone seemed to be having a great time after their first dive.

Captain Dave headed east in search of better diving water. Our next dive site was "Black Rock". Visibility here was less than 25 feet, poor by Catalina standards, but good enough to appreciate the numerous gorgonian covered rock formations that this site has to offer. 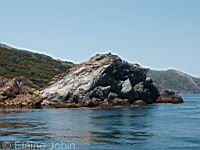 After this dive we continued eastward on our quest for blue water. We passed a rock covered with a large group of brown pelicans, considered stopping for a dive, but continued on because the water still was very green.

Our anchor finally dropped near the high spot on Eagle Reef. A mild current was running and this seemed to help the water clarity. Visibility on this dive was a welcome 30 to 40 feet. I used my Nikonos V with the close up kit and found many photo subjects, however, I had not charged my Nicad battery pack in the SB 102 in over a week and it died after about 16 shots. I missed photographs of the salps abundant in the water column.

One thing that I was able to catch on film was a sea cucumber going to the bathroom. Now I know where all of those piles of sand colored cylindrical piles that I see so often come from.

We had a mostly clear and smooth ride back to Redondo.

Thanks to Michael in the galley for the great food (truly amazing grits), to DM Larry, and to our attentive deck hands "AKA dive sherpas". Thanks Captain Dave for driving the extra miles in search of the blue water. Hopefully present conditions are just temporary from the recent storms and the red tides. 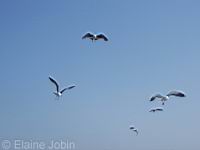