Plain, Simple, Primitive? Not the Jellyfish 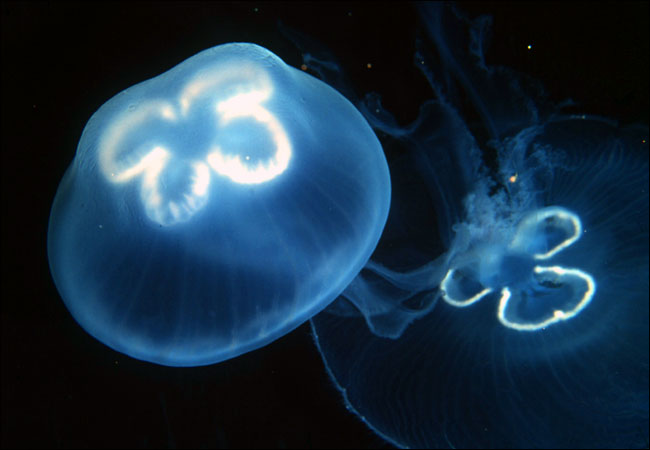 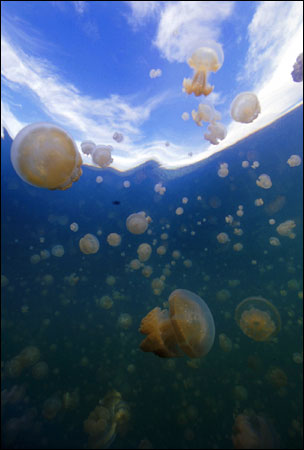 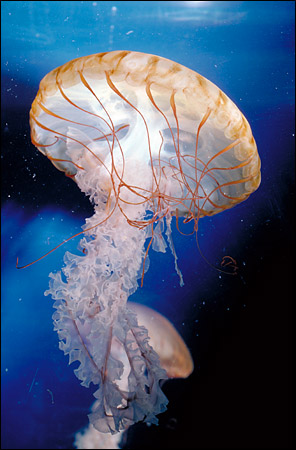 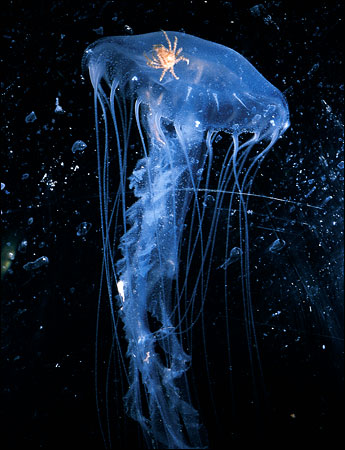 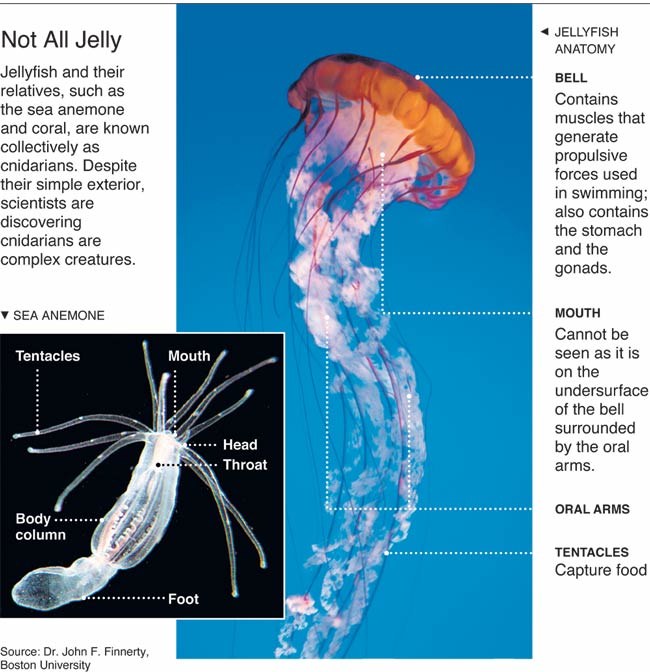 Jellyfish have traditionally been considered simple and primitive. When you gaze at one in an aquarium tank, it is not hard to see why.

Like its relatives the sea anemone and coral, the jellyfish looks like a no-frills animal. It has no head, no back or front, no left or right sides, no legs or fins. It has no heart. Its gut is a blind pouch rather than a tube, so its mouth must serve as its anus. Instead of a brain, it has a diffuse net of nerves.

A fish or a shrimp may move quickly in a determined swim; a jellyfish pulses lazily along.

But new research has made scientists realize that they have underestimated the jellyfish and its relatives - known collectively as cnidarians (pronounced nih-DEHR-ee-uns). Beneath their seemingly simple exterior lies a remarkably sophisticated collection of genes, including many that give rise to humans' complex anatomy.

These discoveries have inspired new theories about how animals evolved 600 million years ago. The findings have also attracted scientists to cnidarians as a model to understand the human body.

"The big surprise is that cnidarians are much more complex genetically than anyone would have guessed," said Dr. Kevin J. Peterson, a biologist at Dartmouth. "This data have made a lot of people step back and realize that a lot of what they had thought about cnidarians was all wrong."

Renaissance scholars considered them plants. Eighteenth-century naturalists grudgingly granted them admittance into the animal kingdom, but only just. They classified cnidarians as "zoophytes," somewhere between animal and plant.

It was not until the 19th century that naturalists began to understand how cnidarians developed from fertilized eggs, their body parts growing from two primordial layers of tissue, the endoderm and ectoderm.

Other animals, including humans and insects, have a third layer of embryonic tissue, the mesoderm, wedged between the ectoderm and the endoderm. It gives rise to muscles, the heart and other organs not found in cnidarians.

Cnidarians also have a simpler overall body plan. Fish, fruit flies and earthworms all have heads and tails, backs and fronts, and left and right sides. Scientists refer to animals, including humans, with this two-sided symmetry as bilaterians. In contrast, cnidarians seem to lack such symmetry completely. A jellyfish, for example, has the symmetry of a bicycle wheel, radiating from a central axis.

Evolutionary biologists came to view cnidarians as relics from the early days of animal evolution. The first animals were probably spongelike, little more than clumps of cooperative cells. Cnidarians seemed to represent the next stage, having acquired traits like simple tissues and nerves.

The fossil records of animals seemed to back up that hypothesis. Many of the earliest animal fossils resembled jellyfish or other cnidarians. The oldest known bilaterian fossils were younger, appearing in the so-called Cambrian explosion, 540 million years ago.

Some researchers suggested that the bilaterian body plan helped set off the Cambrian explosion. Unlike their ancestors, bilaterians had heads, allowing them to sense their surroundings and control a swimming, or crawling, body.

Recent research undermines that theory. The oldest fossils that can be confidently called cnidarians are just 540 million years old. And Dr. Peterson and his colleagues have made new estimates of the age of cnidarians by studying their DNA.

The DNA mutates at a roughly regular rate over millions of years, a so-called molecular clock. Dr. Peterson estimates that the common ancestor of living cnidarians lived 543 million years ago. In other words, cnidarians did not appear tens of millions of years before bilaterians.

Genetic studies have also challenged conventional theories about cnidarians. Beginning in the 1980's, scientists studying bilaterians uncovered a set of genes that laid out their body plan. Some of the genes established the head-to-tail axis, others distinguished the front from the back.

Humans and insects may look very different, but they share almost identical versions of this genetic tool kit. And the findings suggested that the tool kit had already evolved in the common ancestor of bilaterians.

Dr. Mark E. Martindale of the University of Hawaii and his colleagues decided to look for the genes that build jellyfish and other cnidarians. It took a long time to begin generating results. The team had to find a species that could not only survive life in the laboratory but could produce enough embryos for research.

Dr. Martindale's group chose the starlet sea anemone, a species found along the New England coast. Figuring out how to culture the anemone and investigate its genes demanded great patience. "It's taken 9 or 10 years," Dr. Martindale said, "but it's turned into a gold mine."

Further studies showed that cnidarians used other genes from the bilaterian tool kit. The same genes that patterned the front and back of the bilaterian embryo, for example, were produced on opposite sides of the anemone embryo.

The findings have these scientists wondering why cnidarians use such a complex set of body-building genes when their bodies end up looking so simple. They have concluded that cnidarians may be more complicated than they appear, particularly in their nervous systems.

"At the molecular level, they have a lot of body regions that aren't recognizable," said Dr. John R. Finnerty, a biologist at Boston University who is collaborating with Dr. Martindale.

He predicts that research will show that this net is divided into specialized regions like the human brain.

These discoveries have prompted Dr. Peterson to reconsider cnidarians' place in the history of life. "It's changed my thinking about early animal evolution," he said.

He now theorizes that cnidarians were not the simple forerunners of the Cambrian explosion, but very much part of it, their evolution driven by the rise of animal food webs.

In a paper to be published in the journal Paleobiology, Dr. Peterson and his colleagues propose that the common ancestor of bilaterians and cnidarians is a crawling worm. This ancient worm, which Dr. Peterson estimates lived 600 million years ago, represented a major advance in animal evolution. Instead of passively filtering tiny bits of food, it was able to graze on larger prey.

"Once they're able to start grazing through those microbial mats, there's nothing to stop them," Dr. Peterson said.

Some of these animals eventually began to eat one another. Animals that could defend themselves were more likely to survive. One way to avoid being eaten was to become bigger. Another way was to loft eggs into the water column rather than leave them to be eaten on the sea floor. Some animals even began to swim as adults in the open water.

Once the water began to fill with animals, cnidarians took on their current form. The earliest cnidarians anchored themselves to the sea floor and grew upward, as sea anemones and corals do today. In the process, they abandoned the bilaterian body plan of their ancestors.

It was also at that time that cnidarians evolved their distinctive weaponry: a cell containing a miniature harpoon called a nematocyte, for paralyzing prey with toxins.

As new lineages of animals moved even higher into the water column, some cnidarians evolved to hunt them as well. Jellyfish are the product of this final stage of evolution, Dr. Peterson argues.

These new insights into cnidarians have prompted major initiatives to understand them better. The starlet sea anemone genome is being sequenced by the Energy Department's Joint Genome Institute, and is expected to be complete this year.

Scientists expect a number of surprises from the genome project. They have already discovered that a number of genes once thought to be unique to vertebrates have turned up in the genomes of cnidarians. It is now clear that these genes did not, in fact, arise in early vertebrates.

They are much older, having evolved in the common ancestor of cnidarians and bilaterians 600 million years ago. Later, they disappeared in branches of bilaterians like insects and nematodes that have been the focus of extensive genome research.

In some ways, cnidarians are a better model for human biology than fruit flies. As strange as it may seem, gazing at a jellyfish in an aquarium is a lot like looking in the mirror.