The Tale of the Flying Fish 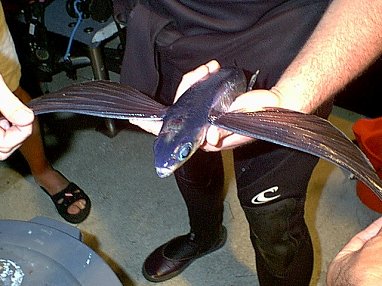 We were aboard the Great Escape dive boat doing a Labor Day weekend live-aboard to San Clemente Island off the coast of California. The boat was anchored off what was called Ordinance Point. On the night of the second day we decided to go on a night-dive at about 8:00 pm. We descended to around 40' and the dive went well. We had thrown some halibut carcasses overboard after filleting them, and the lobsters were feasting on the left-overs. They made for easy targets to catch, but we had to release them because it wasn't lobster season just yet.

When we got down to 700 psi on our tanks we began our ascent. Fortunately, we were directly below the boat so we did not have to swim to get back home. On our 15' safety stop we could see that the flying fish were out and they were attracted to the lights from the boat. I could see them jumping out and landing back in the water. Once I surfaced, I turned towards the boat and noticed I had some kelp to maneuver around to get to the swim step.

All of a sudden, WHAP! Something conked me right in the back of the head. I looked around to see what it was but there was nothing in sight. Well, nothing that is, if you don't count the people on board laughing so hard and holding their sides. Apparently, a flying fish had planned a kamikaze mission and attacked my head. Once I got on board I grabbed a net, and plucked the little dare devil out of the water. The poor guy had gone head-to-head with me, and, sadly to say, he lost. Some would say the pure thickness of my head did him in, but I am in more of the belief that the plastic on the Q-strap of my mask delivered the killer blow. Notice the fish blood oozing from top of his poor little head. In loving memory, I treated the brave flying fish like he was a king of the ocean and let him rest among the large fish others had speared that day.