This was the second dive of a great day of San Diego
diving in Wreck Alley. Conditions were great and getting sunny as we moved
from the Yukon on the way to the Ruby E

Snacks and hot chocolate were provided for the short trip to the Ruby E.
The skipper gave a bit of a briefing.
Tanks were full and in we went.
. 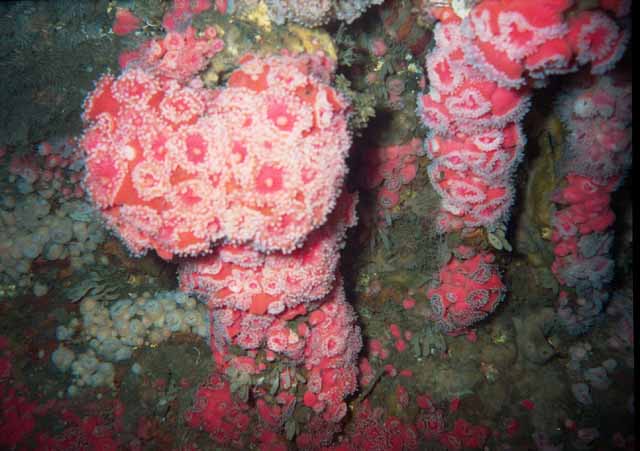 .
At 165 feet in length, the Coast Guard Cutter Ruby E is a lot smaller than
the Yukon. It was built in the 1920's and sunk about 1985. The most notable
thing of the Ruby E is that most surfaces are covered with thick growths of
beautiful Corynactus anemones of every imaginable shade of red, pink and
lavender.
. 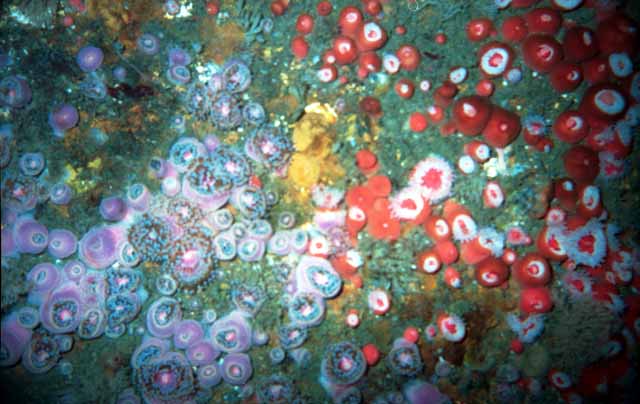 .
I think they were thicker than the last time I was there, though
I saw more than one diver bumping them.
. 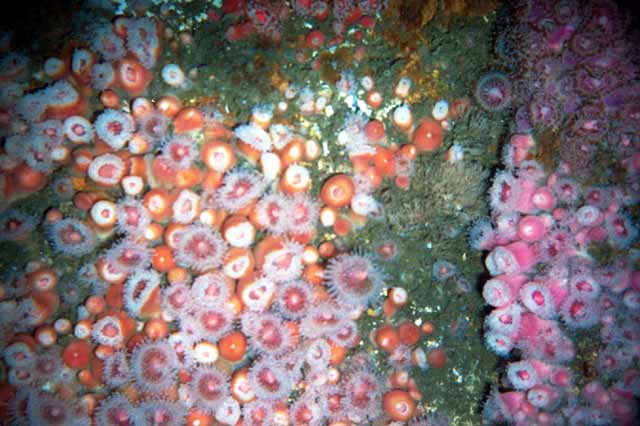 .
I entered the water and followed the anchor line down to the starboard side
of the bow. The ship is tilted to the port with the port rail just above the
sand bottom at about 75 feet.
. 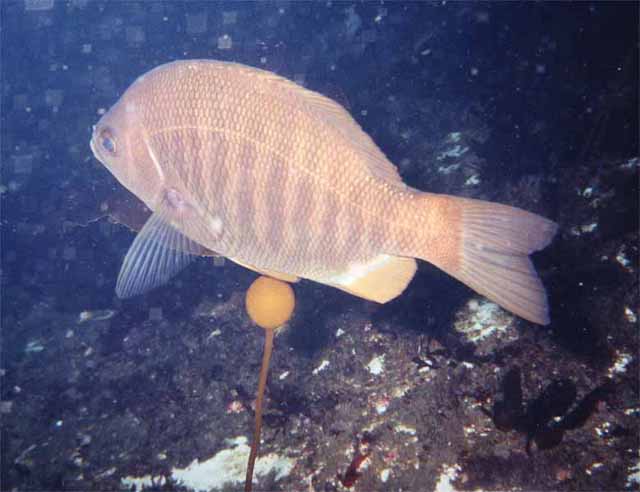 .
I slowly swam along just off the the starboard rail looking at the different
colors. There were various small fish, mostly perch, but some others as well.
. 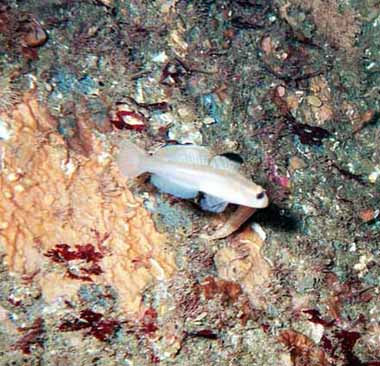 .
On the flat forward deck, many small but healthy gorgonian sea fans were
growing. These were also all over the ship in spots with the Corynactis'. At
one point, I came to a chain rusted into a pile, next to the Lois Ann's
anchor chain.
. 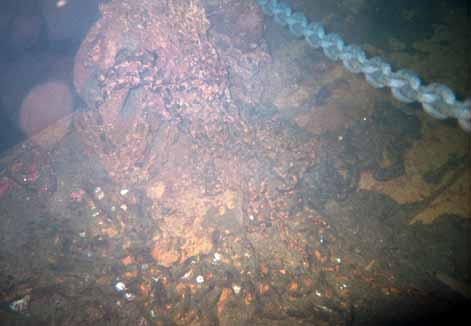 .
After checking out the growth on the forward deck, I slowly drifted along,
even with the port rail, all the way to the stern. Being a smaller ship,
there are less compartments to go in. I dropped in below the deck into
the large aft hold, but there is not much to see really. Moving forward,
you find the engine room with the head bolts sticking out of the block.
The heads were already removed. These are some big engines.
. 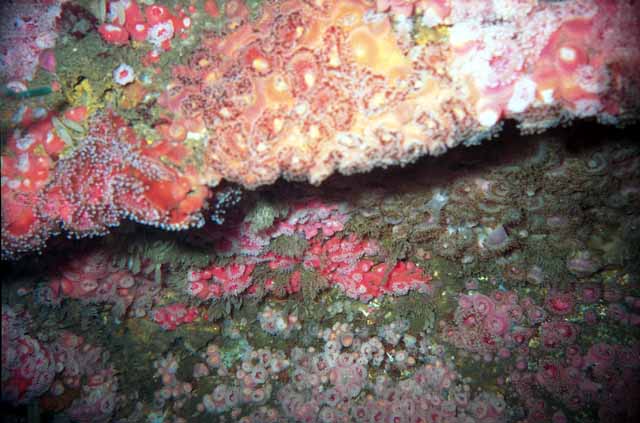 .
From there, it is really neat to go into the large compartment behind the
bridge. It is rather deteriorated and there are a lot of holes and openings
that let in light from the outside. It's still pretty dim in there though.
I stopped there for a while to look around. There is a lot to see and it is
very beautiful. Near the top were some patches of Corynactus that seemed to
be very pale, perhaps from the darkness. All the holes to the outside have
dense growths on them. There are also a number of Warty Sea Cucumbers on
the walls and floor
. 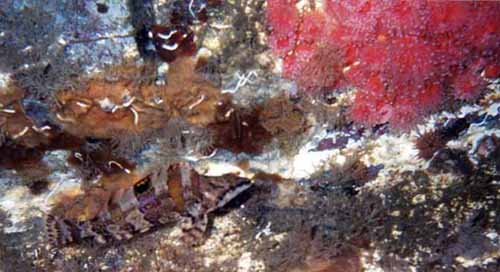 .
I looked into the small bow compartment forward, but it didn't look very
interesting so I went up into the bridge. The round forward portholes suggest
how old the ship is. It too had various growths on its ceiling and thick growth
around all openings. As thick and beautiful as the growth is, especially around
openings, it is a divers responsibility to move carefully to avoid damage.
. 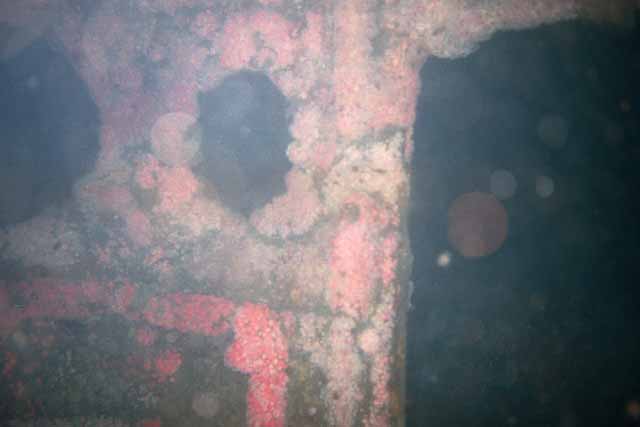 .
Since the cabin and bridge are fairly small it is fun to swim in a circle
around them, slowly moving up to the top. This is where the thickest growth
on the ship is. While there are some fish, Gorgonian sea fans, tunicates and
various other life, I could not find any nudibranchs.
. 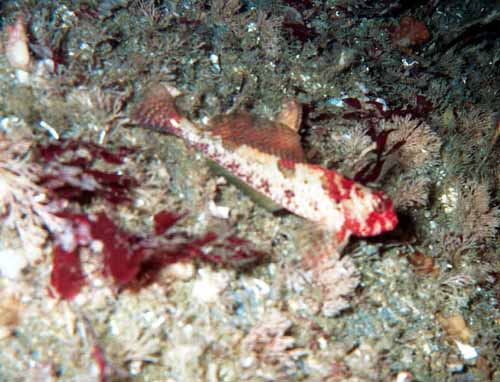 .
It's so beautiful and
the life is so thick there that you can look anywhere and be amazed. Then look
closer and you will see more.
. 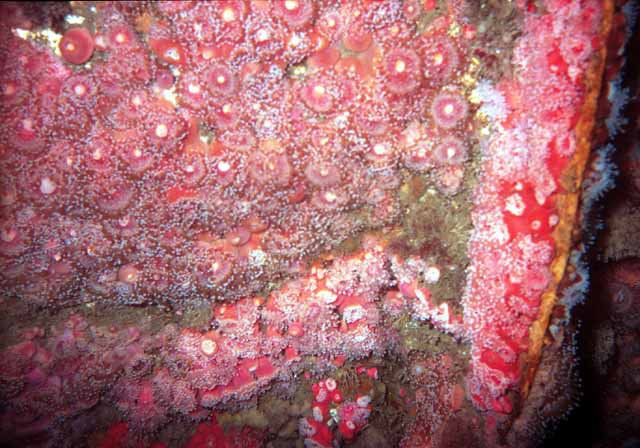