Sea Sons trip to Santa Rosa Island on the Peace

On Saturday & Sunday, January 18-19, 2003, I was on the Sea Sons Dive Club trip on the Peace.
I boarded the Peace in Ventura Harbor on Friday afternoon.
When I was unloading my gear, Captain Fidel brought down the bunk list with his grandson in tow. 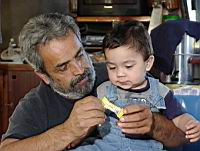 The next morning our first dive was near Brockway Point
The visibility varied between 5 to 20 feet, but I and many others managed to grab at least one bug.
No big ones came up, but the water was an incredibly warm 56 °F, there was almost no wind, the sun was out, and it was warm.
Incredible diving for January! 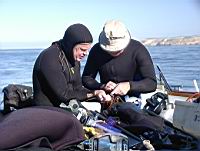 Our next dive was another site at Brockway.
At this site I grabbed three bugs, my best dive for quantity of the trip.
Our third dive was yet another site near Brockway.
At this site I only managed to one bug, but the total take for this dive was 50.
Although we were doing great on bugs, many divers complained about the low vis, so our next dive was at Talcott.
I managed to grab one bug here, but not many came up.
However the visibility opened up to 40 feet, and the water was a toasty 58 °F.
Our last day dive was another spot at Talcott.
Here some people did well, but I was skunked.
A few people elected to do the night dive, but not me. One guy who did go managed to get five.
On Sunday morning, the first spot of the day was deeper area at Talcott.
We jumped in the water, just as the sun was rising, so I decided to take my UK light cannon instead of my usual small light. This area was just beautifully lush, the shelves were up to 30 feet high. The water was still a warm 57 °C. I swam along a shelf for a ways at about 60 ft. I saw nothing but a few shorts, so I decided to look for deeper water. I was cutting across the shelves, each one becoming progressively deeper, when I saw a shelf that seemed to have caved in to a large area of rubble. As I approached I could see hundreds of antennae protruding from between the rocks, but is I examined closer, they all appeared to be short. I then head to the bottom of the rocks and shelf (90 ft.) and saw what appeared to be a huge set of antenna about 40 ft away. When I was about 25 feet away I could see it was a large lobster. I dropped my flashlight and game bag, stuck my arms out, and swam straight toward the bug. I managed to get a good clean grab before he could go back into his hole. I swam back to my bag with him, and for some reason had trouble opening the bag. I placed him firmly under my left arm and held him tightly with my left hand while I opened the bag with my right hand. Just as I got the bag open he bit me very hard on just on the end of my left middle finger. He did not draw blood, but it throbbed for about two hours afterwards. When I got him back to the boat and weighed him he was 5¾ lbs., the largest bug on the trip. There were only two or three other bugs brought up that dive.
We did one more dive at Talcott. I grabbed one more legal this dive.
Our next dive was in shallow water just East of Sandy Point. I and several other people elected to go into the shallows here. I made it to 4 feet of water, and all I got in the shallows was worked. Coming back to the boat, I managed to find a nice 2 ½ lb. in 30 ft. of water. The few people who headed out to deeper water at this spot did well, however John Delany grabbed a nice bug in the shallows and said he saw many more he could not get at.
Our last dive of the day was at a shallow spot near the dividing line of Talcott and Brockway. I obviously went the wrong way on this dive, because I only saw shorts. Several people, including scubabum, grabbed their limit for the day. 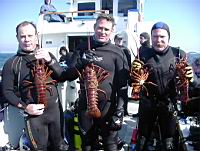 I personally got 10 bugs for the trip, although several people limited. I believe for the 22 divers plus crew there were 180 bugs. It was a great trip, with calm weather and warm water, a special treat for winter.