Beautiful Dive On The NOS Tower In San Diego

Beautiful Dive On The NOS Tower In San Diego

We had a choice for our next dive of the Yukon again, the Ruby E, the NOS
Tower, or for that matter anywhere else we wanted to go in the area. I had
never been to the tower and suggested diving that. It was supposed to be a
better dive when there is some decent visibility. Dale agreed that the NOS
tower sounded good and it was only about a mile away. On the way there, we
got to see a flight of pelicans about 15 strong, gracefully gliding in formation
less than 2 feet over the calm water. We anchored, but still had to wait a while
to enter. Finally we geared up and the skipper said that the tower was just
behind the boat in about 65 feet of water, but that the top was only about
35 feet down. This was a research tower that got knocked over in a storm in
1984. I asked Jim if there were any lobster. He said that there might be
some in the rubble at the bottom, but not many. I was more here for
pictures, but it was lobster season... 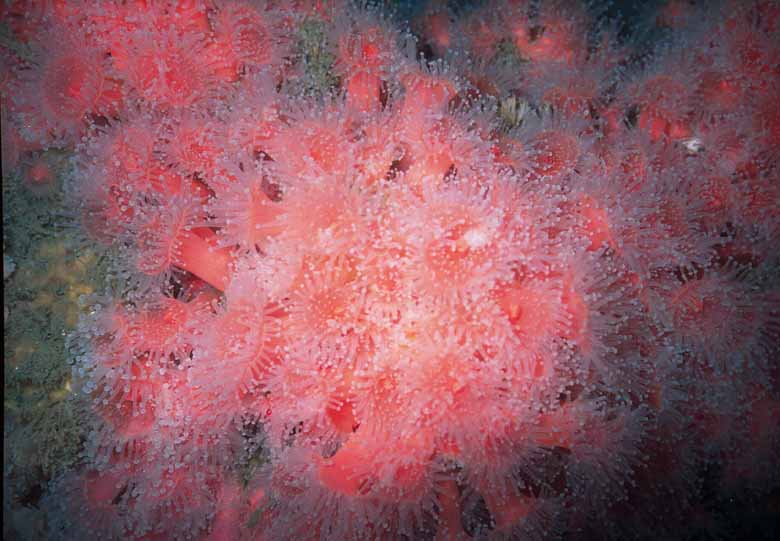 This is what I came for.
Almost as soon as we started down we saw the top layer of beams. They were
covered with life and I could already see lots of fish. I continued over
the side to look at the bottom and see if there were actually any bugs.
There were many heavily encrusted beams and pipes and sure enough there
were lobsters, lots of lobsters all over the place under the beams. They
had almost no place to go and I quickly swatted one.. It was a bit short,
so I aimed it at Dale and let it go. I started looking for any that might
be legal sized and spooked one out that went snapping away. I figured that
they all looked short and then I thought about it and figured that since
Dale almost never dives where there are lobster, I should try to get him
to grab some. He had already figured that out and was working under some
beams from both sides. 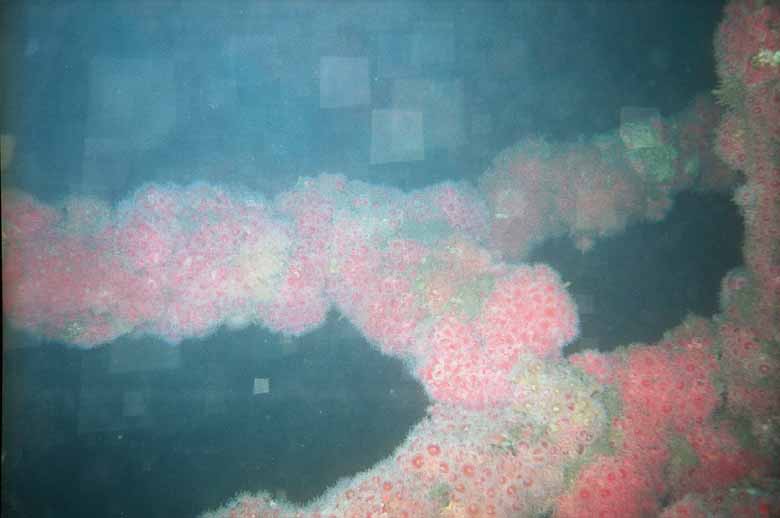 Tower Beams
I'm not a very good watcher so as Dale continued looking for a lobster
that he could grab and was big enough to keep, I grabbed another lobster
and tried to get it to hang on to Dale's tank manifold. I've seen lobster
hold onto tanks until after the diver was on the boat. I just couldn't get
it to stay.

After that we worked around the debris field looking
at the fish and looking for any lobster that might be legal sized. I grabbed
a few, but as soon as they were in hand I could tell that they were not
legal sized. It sure was fun though. There were all kinds of fish everywhere
including senioritis, kelp bass, sand bass, fair sized sheepheads, a couple
of cabazon and others.

About this time I saw that Dale had stopped by some beams sticking up and
was trying to seduce a nice sized cabazon. This I had to see. It looked like
he had done this before and it looked like it was working. He seemed to be
rubbing his fingers together to attract them and when the fish came in close,
he would rub under its mouth. I figured I had to get a picture of it, but
wanted to stay back some so as not to spook it or all the other fish that
were hanging around him. 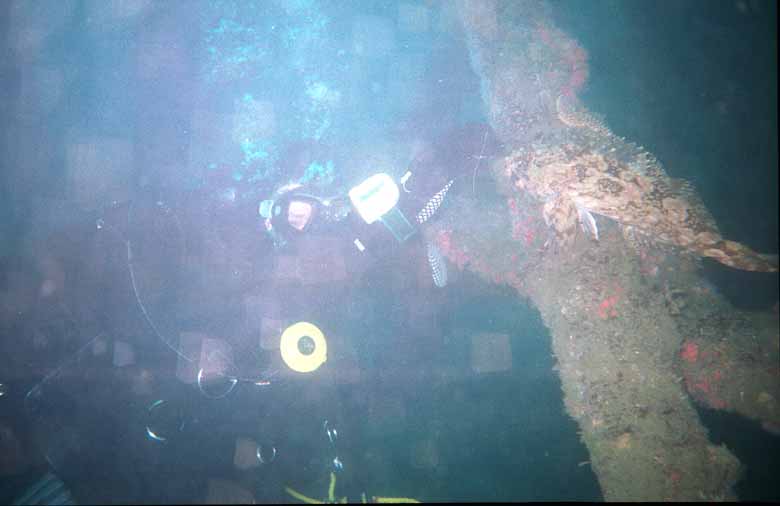 Dale and his pet Cabezon

After a bit of this we started working up and around the structure. It was
covered in every color of Cotynactus anemone. There were vivid reds, pinks,
oranges, purples and even a mainly white patch. This is what I had come to
photograph. There were also a fair number of scallops up to about 4 inches
across. On the bottom were a many healthy gorgonian sea fans. There
were huge Pisaster starfish, mostly on the bottom, but some were on the
structure as well. Higher on the structure were numerous huge mussels up to
about a foot long. 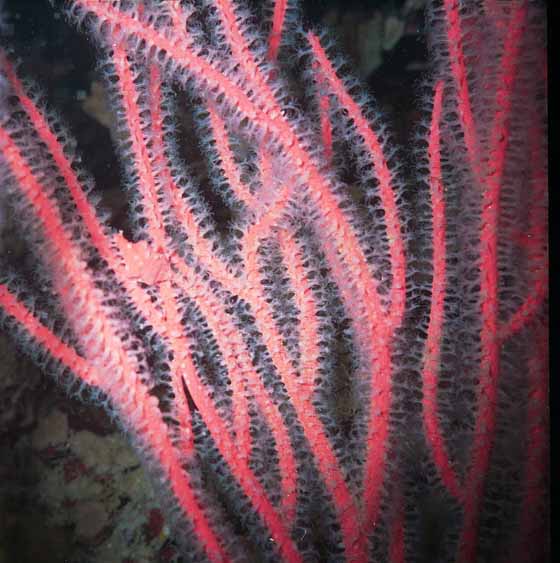 About this time, I noticed that on the bottom about 18 feet below me was what
looked like a speargun shaft. I went down and there was a spear shaft from a
Riffe gun with no line and no tip. I picked it up and figured I would give it
to a friend who had a Riffe gun. I went up again some and joined Dale. He was
playing with the fish again so I floated motionless to watch him from behind a beam.
Just for the fun of it I put the end of the spear shaft into the shell of about
a 4 inch scallop. I had no designs on it and when it closed up, I was going to
take back the spear, but it turned out the scallop was not attached and stayed
on the spear shaft. I thought it was funny and was going to show it to Dale but
he was still busy with his pet. As I held it there, numerous fish started to
nibble on the shell growth looking for anything to eat. I figured what the heck and
while I won't ordinarily break even red urchins, I tore open the scallop and
there was an immediate feeding frenzy. Dale's cabazon came over and I tried to
give him some big pieces, but there were about 30 fish fighting for any scraps.
They quickly finished that off and I figured if a little bit is good, more would be
more better, so I used the spear shaft to break up one of the huge mussels.
Well that made for a happy crowd. If a fish got a big piece, a bunch of other
fish would go after it trying to steal some. That was really fun. 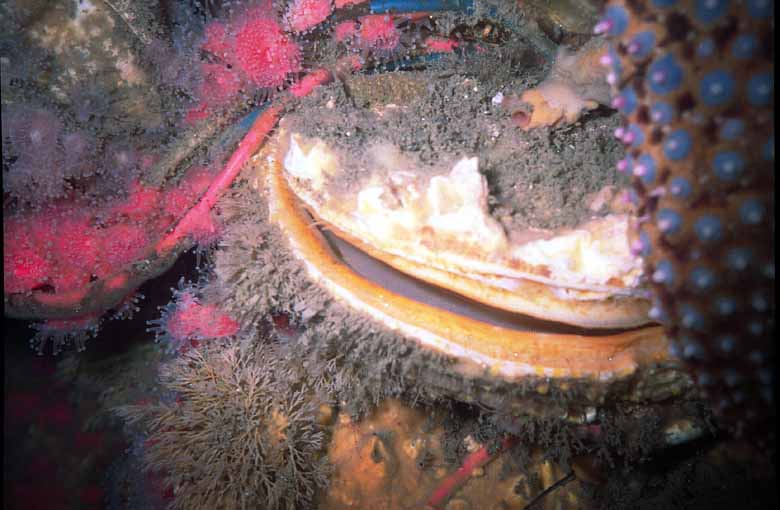 The anemone displays were just gorgeous and I figured on casually spending the
rest of the dive looking close at them. I still didn't see any nudibranchs.
There can be exotic ones on offshore structures. Part of the structure made a
sort of boxed in area of corynactis covered beams and pipes. I went into there
just drifting a bit with so much to look at. In the nook made by a joint of
beams was a small lobster tucked into the anemones... Of course I had used up
my film a while back, but almost everything I saw was worthy of a
photo. 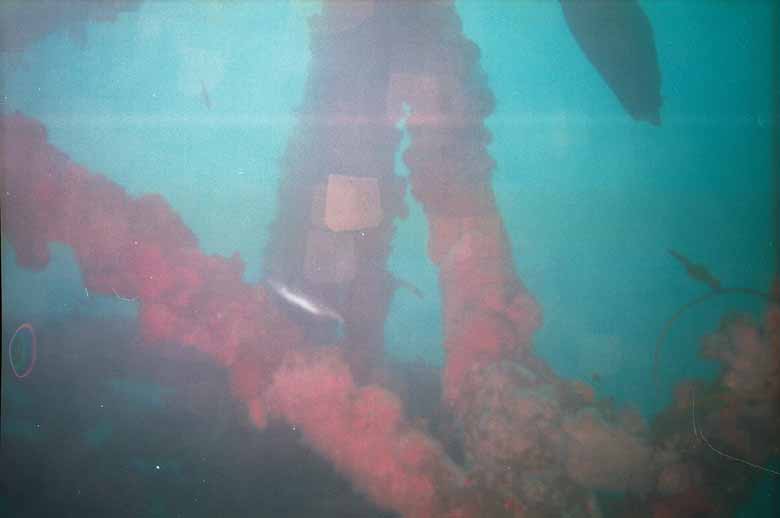 All good things come to an end. I could have stayed there a long time just
taking in all the beauty, but we surfaced behind the boat and went back to
the real world.