Last Sunday, February 23, 2003 I went to Catalina on a Sport Chalet trip to Catalina on the Great Escape.
The boat had a mix of beginning and advanced classes onboard, so Captain Tim chose Bird Rock for our first dive site.
He anchored on the west side of the rock.
On the first dive I went down looking for bugs. I saw very few above 90 ft. and only one good sized one which backed up as I got near. I then went out to the North side rock piles in 130 ft. but found nothing.
Bob Davis and Carol Beck also went out looking for bugs, but they went deep and hit the jackpot.
Bob got his limit and Carol got a good start on hers.
The second dive was in the same spot, but this time I went out toward the south side of the rock.
At 110 ft. I came across a hole with 5 bugs in it, the largest one in the back of the hole began backing up when I was within 20 ft, and so I went for the second largest one.
I managed to pin it against the side of the hole with one hand, and stuck in my other hand to finish the grab.
This was a nice bug which easily passed the "Foster's rule," so I bagged it and continued on.
Across the sand in deeper water I saw a large rock. I swam a bit closer and saw bugs surrounding the rock, backed up against it with no where to go. However they were all deeper than 145+ feet, and this being my second dive I did not have the bottom time to go there.
For the last dive of the day Captain Tim moved to the old quarry.
For this dive I elected to take out my underwater camera for it's second dive since I bought it.
I have an Olympus D-40 in a Olympus PT-012 housing. For lighting I used a UK100 HID light with diffuser, or natural light. I put the camera in ISO400 ASA mode.

My first picture was of a rock and hold fast being lifted away by the buoyancy of the kelp above. 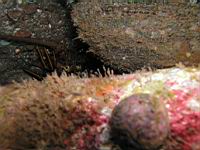 I then came across a short lobster and a green abalone sharing a hole. 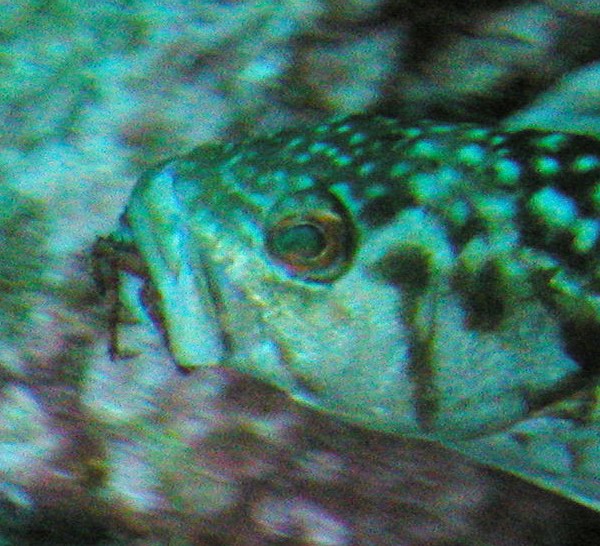 I then saw this calico swimming by with a hermit crab hanging out of it's mouth. 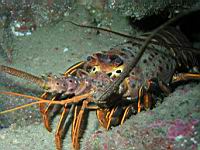 My best picture of the day was one of a legal sized bug at about 70 ft., near the West end of the quarry.
She nicely posed for me, but as soon as my thoughts turned to grabbing her, she backed up.
I was actually surprised how well my natural light shots came out, considering it was a rather dark overcast day. 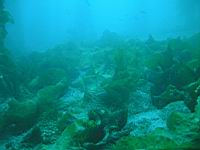 I was at 90 ft. when I took this picture of the bull kelp.

Click here to see all of the pictures from the trip.