Yesterday, Saturday March 9, 2003 I went to San Nicolas Island with Sea Divers on the Great Escape.
Although the weather was beautiful we had a light load, this is great for those who went, but bad for the club, since we lost money.
The GE left the dock Friday night at 11PM.
The ride out was good, slightly bumpy past Santa Barbara Island but nice for springtime.
Captain Tim first took a look at three-mile reef, but then opted to head inshore.
Our first dive was in an area of about 60 ft. depth.
I was the first one off the boat and headed down and forward until I hit the ridge Captain Tim had anchored on.
I headed away from the Island along the ridge. There were deep shelves and scattered rock piles.
In most of the rock piles there were bugs, but most were far back and not reachable.
I managed to grab one just legal bug and headed back toward the boat.
Our next dive site was near by.
This site was 40 to 60 ft. in depth.
Many more rock piles, on a hard rock surface.
The small anemones in this area were spectacular, and would have made great macro photo subjects.
On this dive I grabbed two bugs, both of which easily passed the "Foster's rule" and went directly into my bag.
There was also some very old cable and chain lying on the bottom.
I came across a 30 ft. long anchor that looked like it was from an old destroyer.
Peter Landecker, and another diver saw a large Giant Black Sea Bass at this site as well.
When I returned to the boat, I discovered that one of the lobster I had grabbed had eggs, so I returned her gently to the water.
Suzanne Cervellone grabbed the largest bug of the trip at this site. 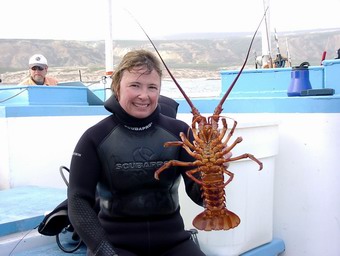 Our next site was an 30 ft. deep area of scattered rock piles, kelp, and sand.
I headed to the outer edge of the kelp and I grabbed two more nice bugs in some of the rock piles there.
When I got back to the boat, I swapped tanks and headed inshore, but found nothing.
At every site the water temperature was 55 °F.
There were almost no currents, hardly any wind, and the sun made several extended appearances.
It was a great day of Nic diving.
What bewilders me is why more people don't want to go to Nic.
The combination of terrain and life there is very different from our other islands, and because of that it offers a very interesting and unique environment for those who choose to appreciate it.
This was the most enjoyable dive trip I've been on in two months.
I'll take a Nic trip over Catalina any day!