Last Satrurday, June 7, 2003, my girlfriend Kathryn and I went to Santa Barbara Island on the Great Escape.
We boarded early so we could go out to dinner in downtown Long Beach.   While we loaded our gear on the boat we were watched by a pelican. 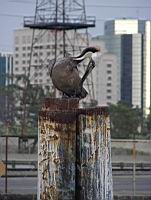 The ride to Santa Barbara was a bit bumpy.   Most did fine, but unfortunately two of the passengers spent the trip hugging the rail.
Our first dive was on the edge of a kelp bed near the southern end of the island, within view of Sutil Island.   The water here was 56 °F with visibility of at least 60 feet.   Directly below the boat was sand, but the anchor was in the reef. There was a large school of juvenile California needlefish, but they were very skittish and I could not get close enough for a good picture. 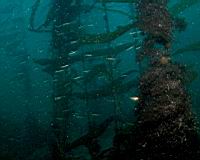 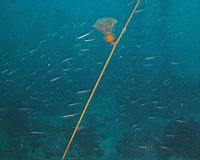 There were many large gorgonians. 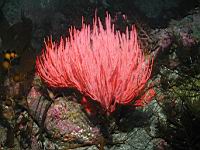 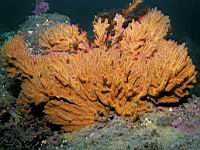 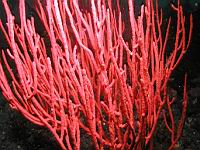 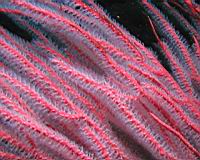 There was also many sea stars, anemones, and brittle stars. 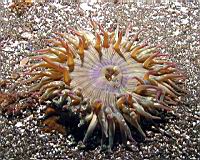 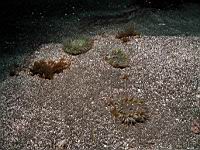 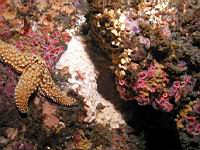 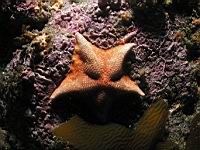 Near the surface by the swim step the water was full of comb jellies and Leuckartiara spp.

Back on the boat we rode around the island, past the rookery to Shag Rock.   The water was a warmer 58 °F here, and still with 60 foot plus visibility.
I took some very nice pictures at this spot. I like this picture because it shows red, crowned, and purple urchins side by side. 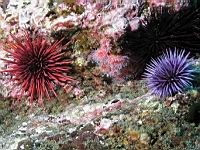 I also like this picture of a bat star, and a kelpfish or fringehead peering from a dead rock scallop shell. 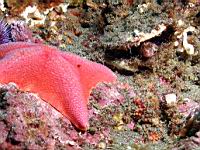 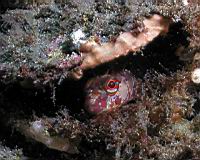 Although the lighting is not optimum, I still like this picture of a bat star checking out an approaching Sea Hare. 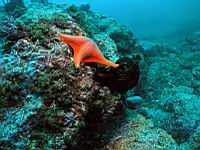 Our third and last dive was at the Sea Lion Rookery. 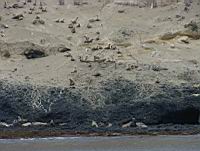 Here the visibility dropped to about 25 - 35 feet, but the water was a very comfy 62 °F.   I concentrated on close up shots because of the lower visibility, but in places it was better as this natural light shop of Kathryn will show. 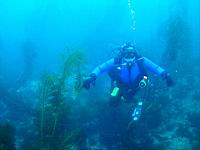 See if you can find the fish in this picture. 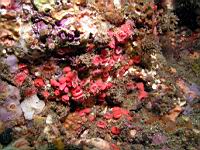 I was about to take another picture of this self decorating which urchin, when a 300 lb. Black Sea Bass swam up to check me out. 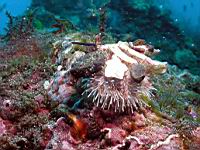 I swung the camera up, but I was too late and only got a picture of it starting to swim away. 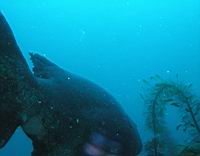 \
I decided to swim after him a bit and managed to take a short QuickTime move of the Black Sea Bass swimming away.
It was a great trip.   Very mellow diving, calm water, and good visibility.   I was beginning to think we would never see such nice conditions again.

Click Here to see all of my pictures from the trip.