This is what he told me

I'm out here in Florida and got in some diving with the local DiverLink contingent. It was really fun and I will give a report with pics eventually, but here is what a diver told me. Usually, I think I remember these stories well, but this went fast, amoung others and was a bit harder to keep track of. It was quite a wild story though and I have no reason to doubt what he said. He did have the credentials to make the storys creditable. I hope you enjoy it.
I guess they have more trouble with sharks in Florida. Where I come from, diving is a contact sport, but this might be a bit much.
He said he was working under a small ledge for bugs and put his bag of bugs on top of the ledge. Well, a spinner shark went for it. They like lobsters. It missed though and bit through his regulator hose. Well, that ended that dive.
Then he told me that he shot about a 60 pound corbina. This is a fish with meat like a tuna, but it looks just like a shark It is a great game fish along the Florida reefs. He had made a good shot so the fish spun in circles in one place and left a green cloud of blood. He swam into that and got the fish. He also saw that about an 11 foot bull shark was interested in the fish and he had to smack it away with his gun repeatedly. He has a commercial licence and this fish represented about $600 to him. Well, the shark was getting pretty aggressive, so he decided to poke it in the eye with his spear. He missed and gave it a good gash across the snout, guaranteed to piss it off.
He got to the surface and saw that his boat was a long ways off, so he yelled to a nearby boat to get on channel 18 and tell his buddy that there was a situation here and get over ASAP. About this time, the bull shark shows up 20 feet away coming for him. The guy on the boat is screaming into the radio that the shark is eating him. He kept the shark away and his frind brought the boat between him and the shark. He tossed the fish aboard and jumped in the back in full gear. The shark was right behind him and bit the swim step.
His friend had some complaints which he disregarded.
Enjoy, seahunt
seahunt Diving and Mergatroidology
.
This is a copia that I saw someone else get on another trip. 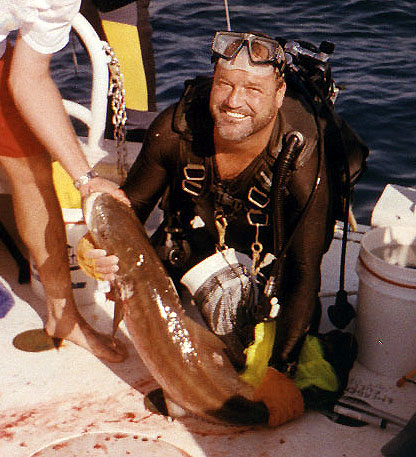