A Time To Dive, My Time

I keep getting told that there is something stupid about this. I love the beauty of Northern
California so much, but I am in the south. Hey, this is where the lobster diving is. Still,
the beauty is overwhelming. What is it that so draws me? Have you been to San Francisco or
the Bay Area? There has been much written on variations of this subject, but let me try to
describe what I see when I look at what is so great about the northern half of California.
Out of charity, I'll leave Monterey and most of it's bay to Southern California. That is appropriate. I'll say that Northern California starts at Salinas and Santa Cruz on the coast.
To me this is not recognized as a geographical or political divide. It is a divide both of diving and of the spirit. My spirit. Don't ask. I'd probably tell you.

The oak and brush covered mountains of the wine country

Do you know that northern California is amazing. There is so much to do there and as
much beauty as you can discover. The redwoods start there. The forests of redwoods and pines cover the rugged mountains of the San Francisco Peninsula. The coast is primeval. Back at civilization or whatever the Bay Area is, there are lights, museums, restaurants, stores and other civilized entertainments of many kinds. Really though, what is nicest for me is that there is so much of nature nearby. The San Francisco Bay dominates everything and the air is always clean and crisp. Any direction you drive to takes you to great parks for hiking. The huge Golden Gate National Seashore is an area protecting some of the most scenic spots of the west coast including the Golden Gate, Drakes Bay and Point Reyes. Past that are the mountains and rocky shores of the wild North Coast. 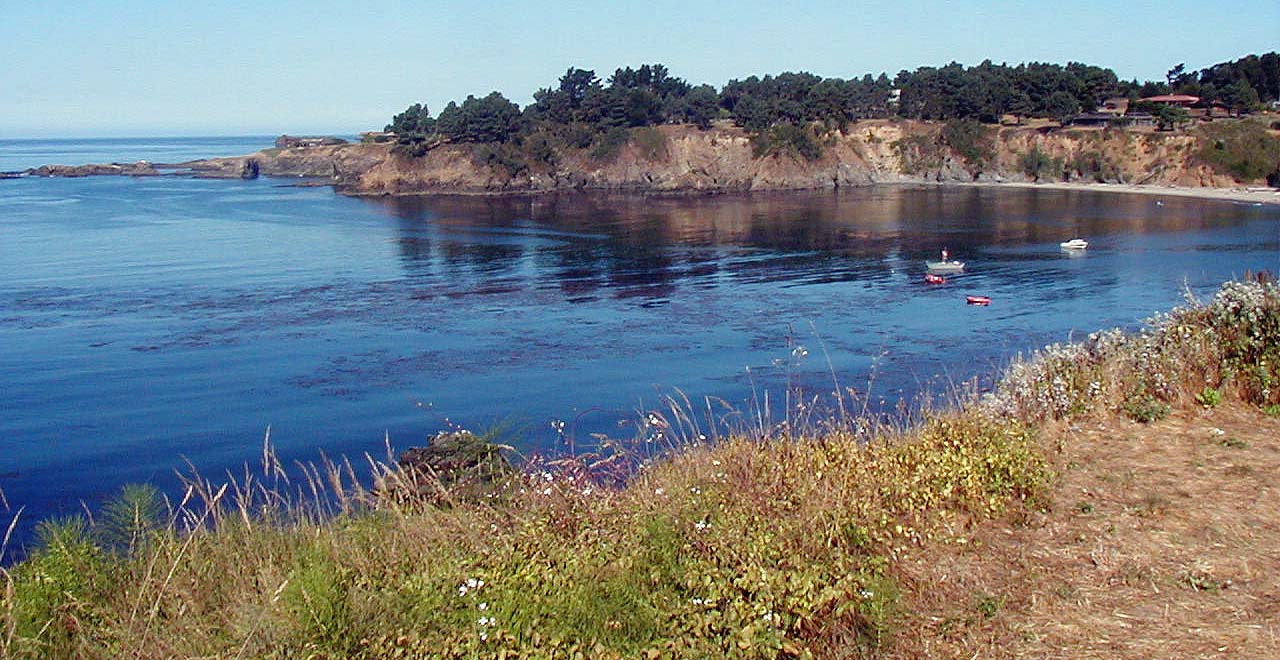 The north side of Van Damme Cove

.
Good fortune made it such that there I was again, via Oakland airport and a rental car. Traveling with both camp gear and dive gear is a hassle, but well worth it. The destination was Eric's Annual Dive Party at Van Damme Cove. The trip was into my past and into my place.


Heading up the north side of the Bay on a clear day, a little back and across the Bay is the distinctive skyline of San Francisco. Past that is the Richmond - San Rafael Bridge and north 101. Then it is into more of the oak and brush covered hills of the wine country that continue on until there is only the redwoods and pines. I was hustling some because Eric had said that we would dive that afternoon if I could make it on time. After an hour, I passed River Road in Santa Rosa that I usually took out along the Russian River to the coast. This time though, I only stopped at the fruit stand there off the hiway. Then I continued up 101, on to Cloverdale, further north than I had been in 15 years. This was the 58 hiway through the Anderson Valley. I remembered the long beautiful way past the wineries, but I had forgotten how winding much of the road was. Then I was at the coast, traveling like I always had, alone, looking for adventure and beauty driving along this shore.

The problem of this trip was that I was thrashed. I had been working extremely hard up until I left and was physically exhausted. My bad knee was tired enough that I wasn't sure if it was done in. I was starting out with the tops of my toes already worn through and very little skin left on the bottoms of my feet. It was a great way to start a dive trip. I really did not know what condition I was in.

.
I had no trouble finding Eric and he said it was time to dive. It was late in the day, but the sky was clear and sunny. Visibility looked OK and the ocean was calm. Even the usual afternoon wind had not come up. The shoreline is rocky cliffs crowned by beautiful dark forests. Eric, Larry and I were in Eric's dory heading south to one of the waypoints in Eric's GPS. This would be a pinnacle, among the hundreds out here, that might not have been visited in years. The initial target was Pinnacle X that Eric had been curious about for some time. Vis had been bad the previous week, but looked better today. We got to the area about a mile off shore and started metering around. In places, the water was about 20 feet deep, but right next to that it dropped to 80 feet and then 100. We tossed the anchor and geared up. The plan was for Larry to tie off a line to the anchor and we were going to follow him. Eric was carrying a speargun and I had my camera. Entry was a back roll into very cool water. 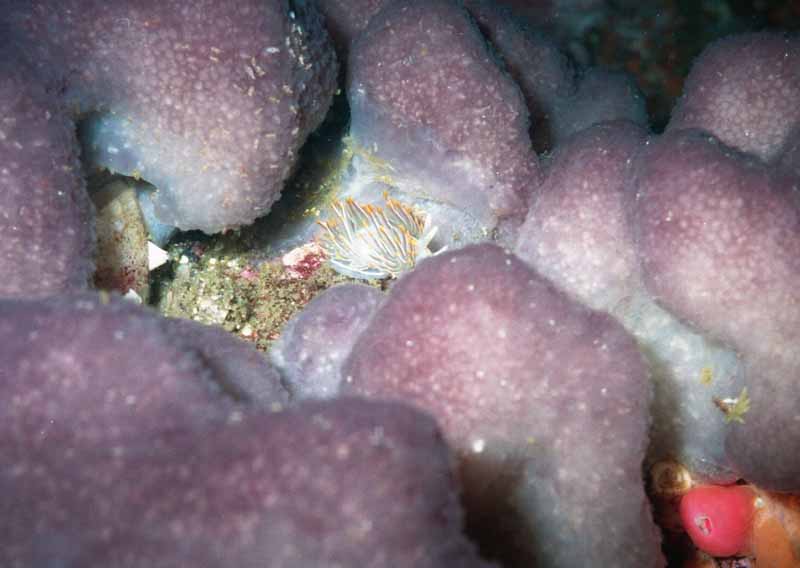 Delicate place for a delicate nudi

.
The current was minor, but there. Vis wasn't good on the surface, probably no more than 12 feet and there was some red tide. At 20 feet, vis started to improve a fair amount, but it was dark. It was also cold. I decided that it wasn't just my feet, which were bare, I could feel the cold through my wetsuit. Well, it was time to ignore that and get moving down the line after Larry who was making tracks ahead of us. I was getting a bit of a look around as the line went along the lowest part of a flat rock wall. There was lots of life, but my attention was on where the line went over another rock wall that met the first one and then it followed that down where the two walls came together, into a very dark place. I followed it down into the blackness until the depth was a bit beyond 90 feet where the main rock wall met the boulder covered bottom. This was going to be a dim dive.


We continued following the line along the wall, about 6 feet above the bottom. There were huge Green Anemones and Rose Spotted Anemones. There were a number of the bright orange Sea Cucumbers. While there was no algae growth really visible, there was an occasional large abalone and large red urchins. There were many fish that I kept illuminating with my light as we went along. Eric was looking to find something for dinner. 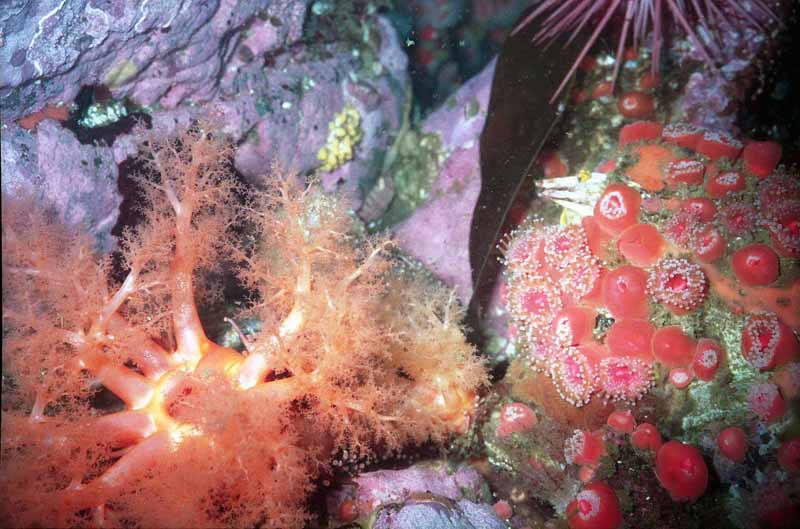 There were a lot of these brilliant orange sea cucumbers

.
It's interesting that we were focused on the rock wall to our right that went almost straight up out of sight. Just to our left and a maybe 6 feet deeper was the boulder covered bottom, but even though close, it was dark enough to put anything below us a fair distance away. I saw a lot of different life on top of them and I suspect that looking under those rocks would have shown a number of fish. It was cold and dark enough to look quite inhospitable to us, but this is a rich home to the local life.


We had caught up with Larry and were looking around at all the strange things to see. I saw a nice sized Lingcod that immediately went into a large crack. I got Eric's attention with my light and looked for the fish again. The crack was about 8 feet deep and 15 feet tall at least, but it was less than a foot wide. I looked in and saw a number of fish including one large one that was moving too fast to identify. The ling was about 5 feet in though and seemed well planted until Eric speared it. 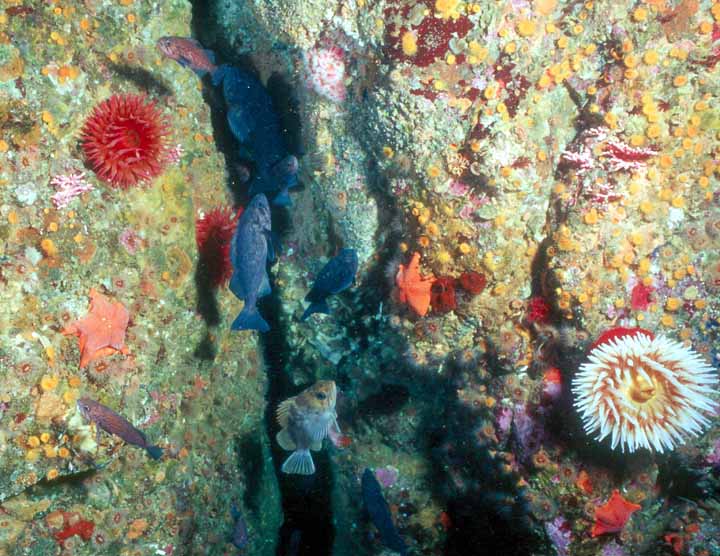 Life in a crack. Picture by Eric Sedletzky

Larry went on a bit, but it was about time to head back. We looked around some and I headed back along the line quickly At one point I saw a very large Vermillion Rockfish, but it took off quickly when I spooted on it with the light. Heading up the rock wall to the anchor was a physical and psychological journey into light and warmth. The water at the bottom was 49 degrees.


Getting gear and people into the boat is a cooperative effort. Then there was a moment to relax and think about an amazing dive. We agreed this dive was one was to be measured on the gnarly scale.

There is something special about camp routine. I'm into a bit more comfort than that, but it is nice. Eric made beer batter for the fish and Larry brought out his homemade tartar sauce with the dill in it. The fish was great and it was the first time in years that I had had some Red Tail Ale. That made a great dinner. The downside is that just being up here diving has got me wound up like a toy top. Luckily, most divers are open minded and just ignore anything I babble and hand me a beer or offer to open some more fine wine. 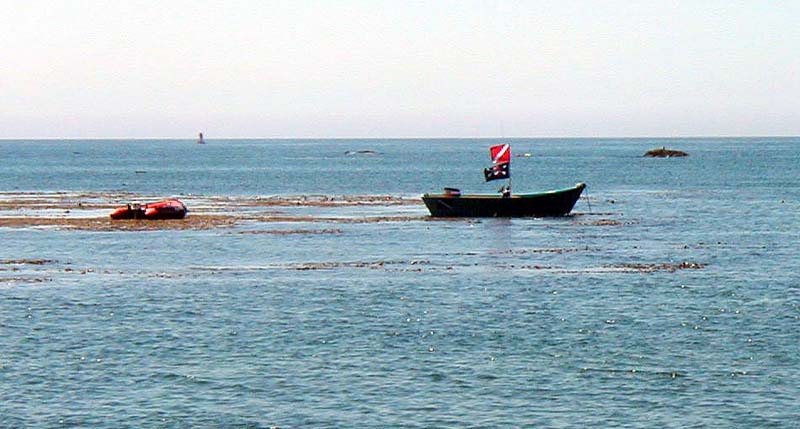 .
seahunt Diving For The Fun Of It