The theme of the Sea Divers trip to San Miguel Islands was cold, windy, good visibility, high chop, and incredible dives. It was a small group of about 22 divers. Good for the divers, bad for the club. 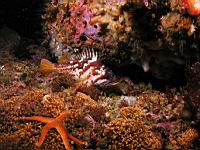 We headed to San Miguel Island. Before Capt. Eric would let us in the water, he made sure we all had a thorough briefing about diving in wind. He said that the visibility was the best anywhere in the Northern Channel Islands. However, the trade off was wind, chop, and more wind. Though most of us were experienced, he again reminded us to use the anchor line both directions. 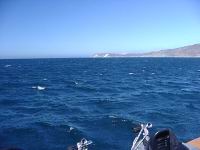 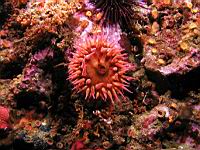 The first dive was just east of Crook Point. It was high Windy & Chop @ surface, with vis 45-50 temperature of 52. We saw copper rockfish, olive rockfish, and Red fish and Lings 90+ feet, as well as greenling. The second dive was at the Bluffs, with similar conditions, and a lot of rockfish, which meant successful hunting for some members. 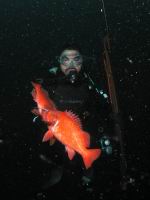 The third dive was at outside Wycoff Reef. It was Very Choppy, with Vis 35+, and lots of small pretty stuff+ a baby wolf eel,76'.

The fourth dive was other side of Wycoff Ledge. There was a ripping wind, visibility of 40, and we saw many small lings, and beautiful small things. The last dive of the day, for the hardy was at the Bluff's, where they found many red abalones.

Capt. Eric asked whether there were any night divers. The answer was "It's not lobster season!" 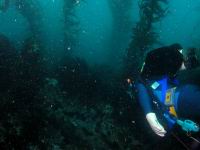 So we headed back to Santa Rosa, So the bottles were stacked, and dinner was served. We spent the night at Johnson's Lee with the Truth. The highlight of the dinner, aside from the company, great meal, and the visit from the crew of the Truth, was Cervallone's "Let's see if we can get the cork out of the bottle trick. 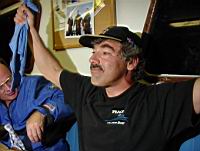 The next day we headed back to San Miguel Island, again opting for visibility over calm conditions. The first dive of the day was West of Crook Point. The wind died down a bit finally, with 50+ Vis, and saw lots of vermilions, reds + lings cods. 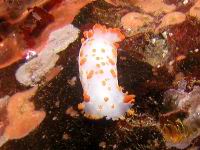 The second dive was at Point Bennett, aka Shark Park. Some of us thought that was just a joke. Fortunately, we saw a lot of abalones, big anemomies and beautiful little nudibranchs in nice rock formations, but no fish, but also no sharks! 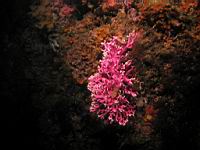 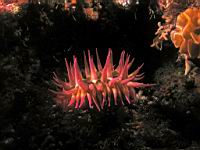 The third dive was at Rain Barrel, which had nice rock formations. It was a beautiful dive, with lots of fish, huge lingcod, rockfish, sea bass, and kelp fish. It was very cold, but gorgeous. The photographers had fun taking pictures of one another, while the hunters were successful. Cervallone shot a shot 37 "ling 20-25 lb., the biggest of the trip. The last dive of the trip was at Tyler Bight. Then we started the long trip home. 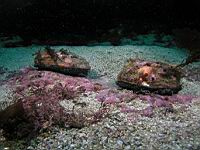 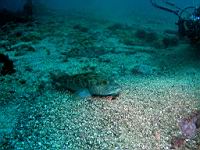 For those who had never dove San Miguel, there were thrilled with the visibility, the size of the fish, and the sea life that one mostly sees in Northern California. Though it wasn't a profitable trip for the club, it was great for the participants, who said it was some of the best diving of the summer. Just with the wind, the cold, and the waves, it wasn't for the faint of heart. And people kept murmuring, "Oh for a dry suit…" 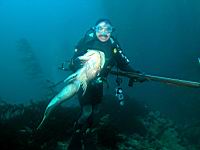 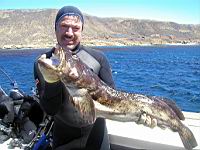 Many more pictures from our trip: