A Time To Dive, My Time - Mendocino Day 2

The day started with a bit of fog, which suggested that wind wouldn't be a problem. More people were there this morning. John and Robin were a couple of devoted kayaking free divers that terrorized the fish. Marcus and Keko were not the most seasoned divers, but Marcus has to qualify as one of the most enthusiastic divers I have met in a while and Keko was sure up for anything diving. We were expecting Dale and Steve, but their schedule was anybody’s guess.
The plan was for Eric, Marcus, Keko and I to go south from Van Damme cove and do some free diving for abalone.

This is my favorite part of diving. Slowly exploring along the shore and reefs. Near shore here, are all kinds of channels, rocks and small islands. There are ocasional thick kelp beds to go around. Passages are deceptive and frankly, one reef with bull kelp on it pretty much looks like another, but like all hunters we still look for the most likely spot. It is that unknown thing of exploring a new place. It is all cool, misty and beautiful. 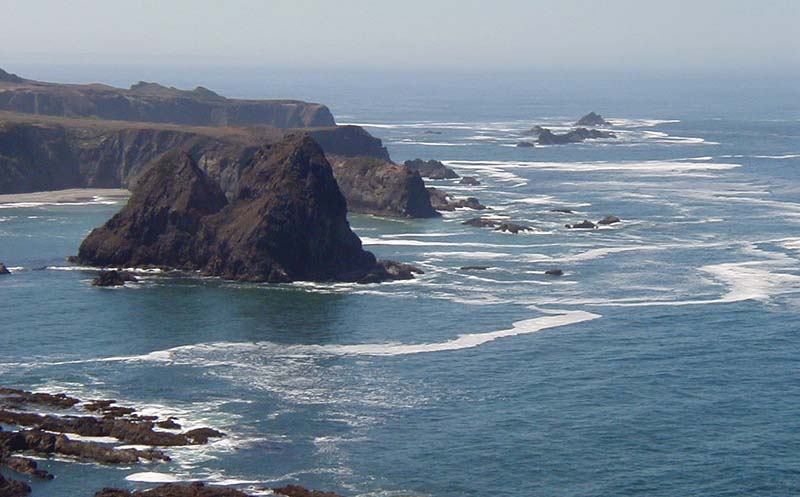 The diving areas just go on mile after mile

We anchored just off shore within 100 feet of a number of great looking spots. Part of the area was a bit protected behind a small island and the rest was exposed. Keko and Marcus headed in. I went out and Eric was in between. I was carrying my 9 inch abalone measure and was just hoping my dive skills still existed. A few dives and God Bless, I was cruising to 25 feet with no trouble. There were abs everywhere as well as lots of other life, but the abs seemed mostly less than 8 inches. I continued to where the bull kelp was sticking up out in the open. It was deeper and I was enjoying it, but it was hard diving and didn't show any real big abs. Again
there was an incredible amount of different life on everywhere. There were lots of small fish as well as some larger cabazon and greenlings. Numerous picnopodia starfish of all sizes were on the rocks. Some were a deep purple and some a bright fire orange.

I did a few more dives to about 35 feet and even one deeper into a hole, but not surprisingly, it seemed I was a bit deep at that point for most of the abalone. I headed towards shore where the other divers were working. The diving was beautiful. I wasn't that worried about taking abs, but I was surprised that they seemed mostly a bit small. I was finding an occasional 8 1/2 incher, but I was checking a lot of abs. After my last trip, I actually wanted a fat one near 9
inches rather than a flat one that was a full 9 inches. I saw something that I never had seen before. Probably 20 feet off the bottom and 10 feet from the surface was a 6 inch red abalone that had climbed up 2 bull kelp stalks. I've never seen any abalone climb kelp. I saw a nice sized cabazon and tried to stab it, but that rarely works and didn't this time. I had made a lot of dives and it was time to get serious. Near the cabazon I had seen what looked like some big abs. I went back down into what was a hole about 18 feet deep and only about that long. I made about 3 dives to measure what I could. At the end of the hole was some overhanging rocks and sure enough I found one ab that was a bit over 9 inches. Unfortunately I also managed to drop my measure. I went down, picked it up and took a real fatty that was a bit short of 9 inches. Both went in the boat. 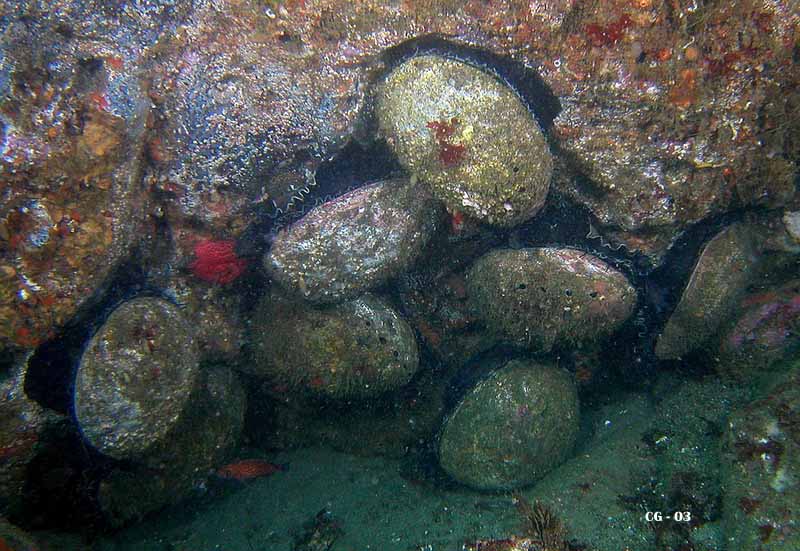 The diving was beautiful and considering I was limited to 3 abalone over 4 days, I was far more into site seeing than worrying about filling my limit. I can free dive like this for hours without ever getting tired or cold. Free diving is a bit to scuba as bicycling is to driving a car. You are just going to see more. but it was time to head back. It was a beautiful day and Keko, looking ahead in the bow of the boat with the shore behind her, in the sun and the breeze, looked like a scuba magazine ad, just without the logo.

Dale had made it in his big tri-mix truck. With K bottles of Oxygen and helium, along with a compressor, he was able to make any mix you wanted there in the parking lot of the campground. A bit later that day Eric, Keko, Marcus, Larry, Patty and I got assembled to do a scuba dive. With all of us in the boat plus two tanks per person, the load in the boat was well over a ton. It took it fine, though Eric did do a quick prop change. We headed south, with a plan to look for Pinnacle X again. Steve and Dale were going to the same place to do a deeper dive. The GPS gets you so far to a point about one mile off shore and then Eric was metering again. He found what he was looking for and we dropped anchor. About this time, John and Robin showed up on their Kayaks. They had been diving closer to shore and had found some good fish including a nice lingcod. When they saw us, they had paddled out for a visit. As we started to gear up, Eric pointed out that the current might be a problem. His spear gun and some other gear had been hung off the back on a line and was flapping in the current. After a little consideration we headed in towards shore. Larry and Steve seemed to still be planning a dive out there.
About 1/4 mile from shore was a thick patch of bull kelp that was on top of a steep sided pinnacle that came to about 20 feet from the surface, but dropped to about 80 feet all around. We anchored and got arranged. Keko and Marcus were going to buddy as were Larry and Patti. Since we were closer to shore and in less current, Eric and I were going to solo and look for fish. This was great. It has been a long time since I was diving in a place that was healthy enough for me to be comfortable letting loose on the fish with a spear. 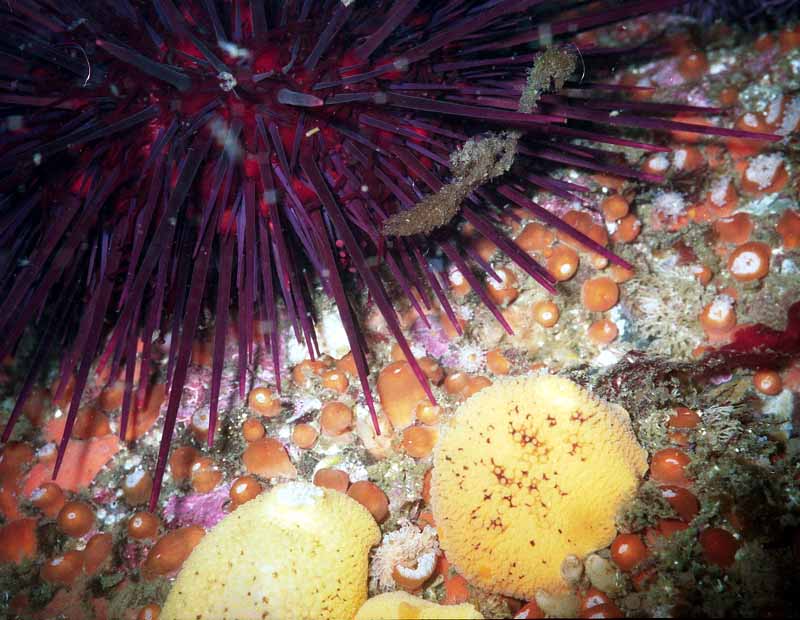 A couple lemon nudis under the watch of a pin cushion

We got in the water and I went down. As I passed the top of the rock, I could see some nice large red abs in the bull kelp as well as some Flat Abalone. Below the top though, it was rock with almost no algae. There were loads of invertebrates though, including various brilliantly colored anemones. Visibility was at least 15 feet and the water though cold, was not like the last dive. 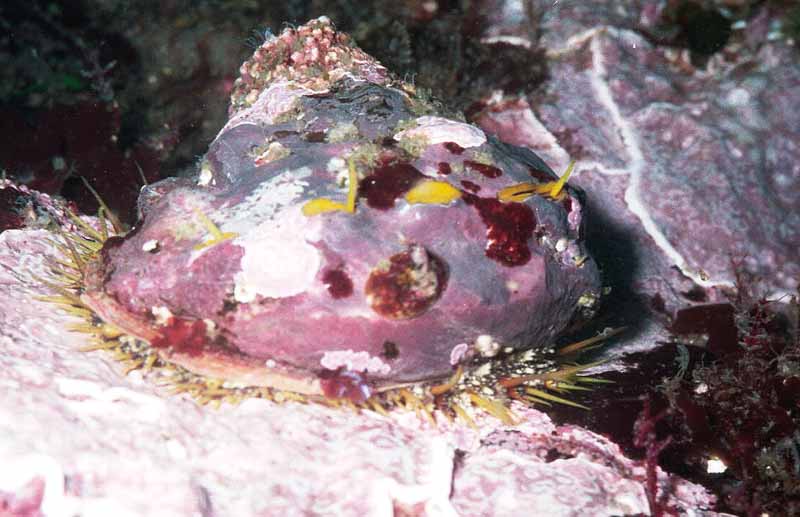 Flat Abalone were on top of the rocks

At about 60 feet I saw a hole in the rock that had light at the back of it. It was too small for a diver to pass, but there was a large red fish in it so I poked it real quick and stuck it in my bag. I continued on down to the bottom where there were more of the Orange Sea Cucumbers in the rocks. Some were sticking out as much as 6 inches. That was something else that I had never seen before. 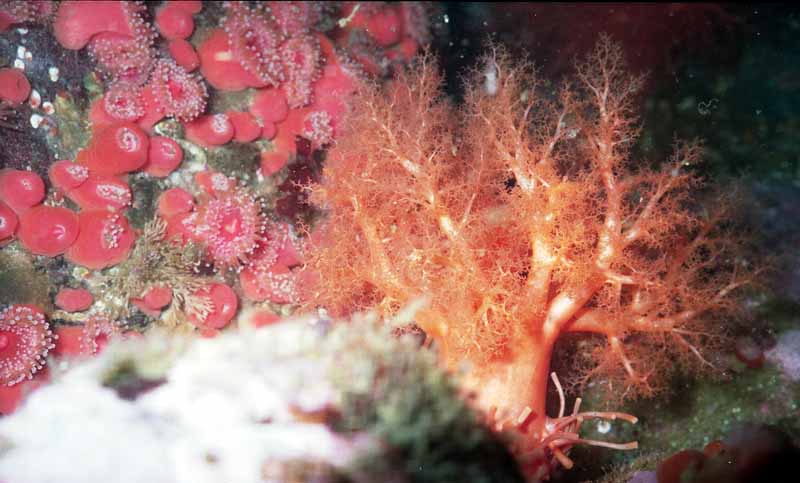 I headed along the side of the rock. As usual, there were all kinds of starfish, anemones, sponges and various other invertebrates. I saw 2 other edible looking fish and put them in my bag. There were fish I saw that I just couldn't identify, though they looked like miniature ling cods. I wasn't sure about them and left them alone, but later I found out that they were a kind of cabazon and quite legal to take.
I was moving sort of fast and when I checked my compass, as I hoped I was moving directly north and so should be half way around the pinnacle. It was not big. At one point I came to some rocks leading off. They offered that usual mystery. What is out there? At near 80 feet, I knew what my limitations on time were and kept going around. Whenever there was something curious I would stop and check it out in my light. It probably would have been far more visually stunning
with a HID light, but it was still beautiful. 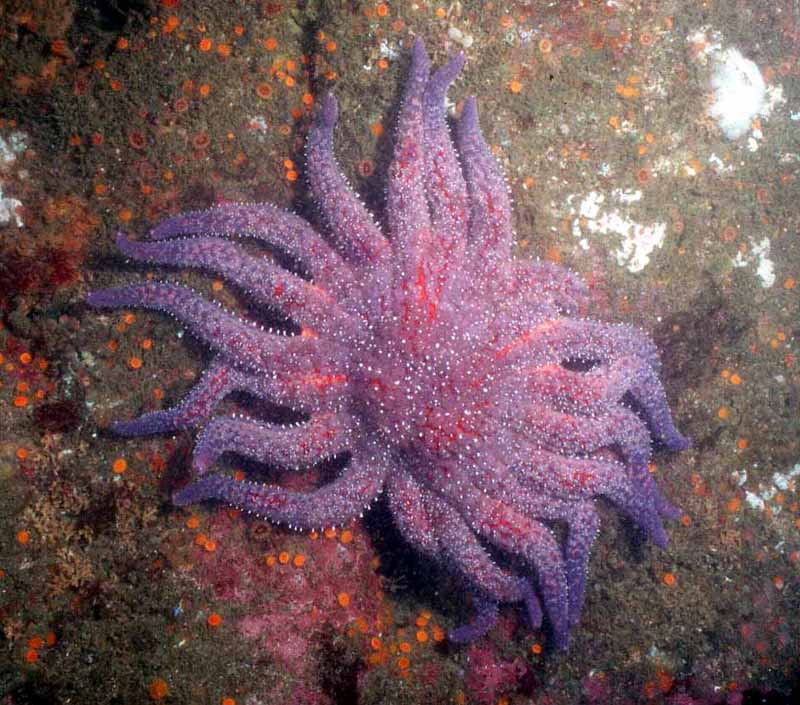 Picnopodia Starfish. A swift predator that is the the terror of the reef. Pic by Eric S.

I made it back to where I was heading south. I had some air, but no where to go but up. At 60 feet, I went past the hole I saw at the beginning of the dive. Behind it was a large hole filled with bright red corynactus and some picnopodia starfish. I moved around the rock some, but stayed below the bull kelp. Even so I could see large abalone and lots of other life towards the top of the pinnacle. I looked around some, but it was time to go up. 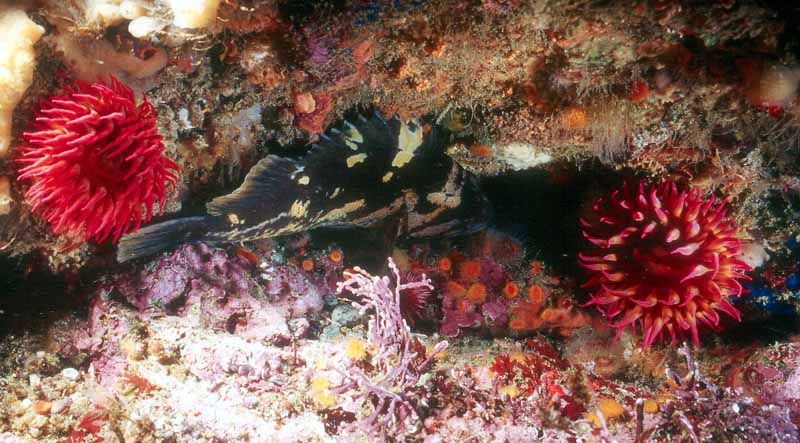 To see this is why we dive. Pic by Eric S.

The seas were nice and after a bit, it worked out that Keko, Marcus and I were going to dive again, but the others were going to sit it out. Since it was the same rock, I figured I would bring my camera instead of my spear. I went on down again, but stayed at about 55 feet where I thought the most invertebrate life was. Using my camera was difficult with the shutter button broken, but I was shoving the end of the abalone measure in it to take each shot.
When my film was gone, I decided to go inside the thick patch of bull kelp on the top 15 feet of the rock. It was tough to get through, stalks were mostly 6 inches or less apart, but I was in no hurry and there was a tremendous amount of different strange and colorful life to check out. I started breaking off kelp leaves and feeding them to large red abalone. You just shove a piece of kelp leaf under their mouth and they grab it with their ... foot. After doing this about 5 times, I moved into the thickest part of the kelp patch and settled into a small low spot in the rock. It was full of small kelps and invertebrates. There were numerous sponges and
tunicates. I was just relaxing on the bottom feeding abalone when something wrong happened. I didn't know what it was, but it was very wrong. I looked around, but there was just thick kelp in all directions. I relaxed again on my rock and it happened again. I jumped about 4 feet off the rock, but this time I knew what it was. Above me, was Eric laughing away, upside down, holding a pony bottle in his hand. The first time he had yanked on my camera. The second time he had yanked hard on my shoulder.
I continued through the kelp some, but the dive was pretty much over. Well, that’s what friends are for. 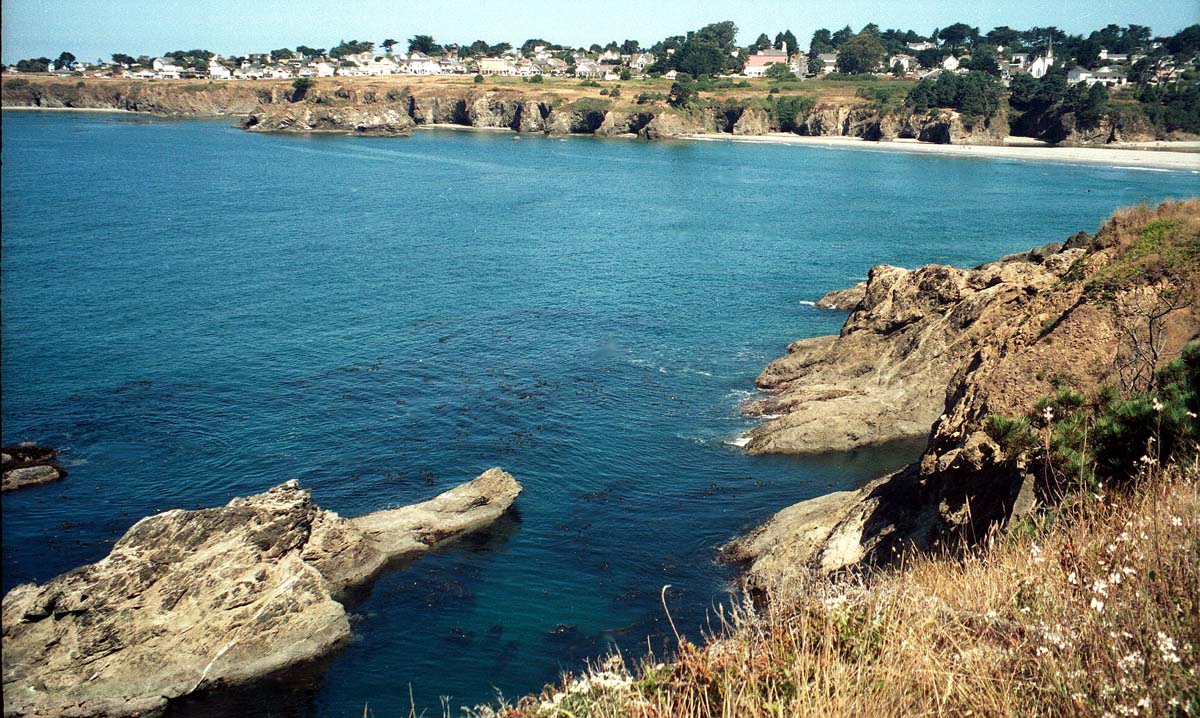 The artists colony of Mendocino on the Little River

That night there were more cooks and we started out with Robin's ceviche. The main course was something Eric thought up to try. It was mixed abalone and fish fajitas and it was very good. That led to a late night again of mild conversation under a beautiful starry sky. This was the weekend when Mars was at its closest to Earth and the diving was at its bestest.