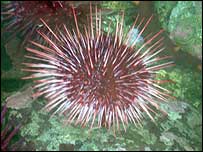 The small, spiny creature can last for more than 200 years with few signs of age-related disease, a US research team from Oregon and California has found.

The animal, which grows to more than 15 cm across, grazes on marine plants and uses its spines to deter predators.

The urchins ( Strongylocentrotus franciscanus ) were once considered the scourge of the sea.

They ate plants in kelp forests and people believed they were at least partly responsible for the decline of that marine ecosystem - and so tried to poison them.

However, the spherical echinoderms became valuable in the 1970s when the US sold them to Japan, where their sex organs were considered a delicacy.

They brought high prices, and at one point in the 1990s were one of the most valuable marine resources in California.

Now, studies indicate red sea urchins grow a lot more slowly and live a lot longer than had been believed - certainly longer than the seven to 15 years previously assumed.

The latest work on sea urchin growth rates uses measures of the isotope carbon-14, which has increased in all living organisms following the atmospheric testing of atomic weapons in the 1950s.

"Some of the largest and we believe oldest red sea urchins up to 19 centimetres in size have been found in waters off British Columbia, between Vancouver Island and the mainland.

"By our calculations, they are probably 200 or more years old.

"They can die from attacks by predators, specific diseases or being harvested by fishermen. But even then they show very few signs of age. The evidence suggests that a 100-year-old red sea urchin is just as apt to live another year, or reproduce, as a 10-year-old sea urchin."

In fact, the indications are that the more mature red sea urchins are the most prolific producers of sperm and eggs, and are perfectly capable of breeding even when incredibly old.

"Among other things, [the radiocarbon data] confirmed that in older sea urchins, there is a very steady, very consistent growth that's quite independent of ocean conditions or other variables, and once they near adult size our research indicates they do not have growth spurts."

The research is published in the US Fishery Bulletin, by scientists from Oregon State University and the Lawrence Livermore National Laboratory.