On January 30 and 31 the Great Escape made a run to Cortez (Cortes) Bank. The trip was organized by Art and Michael LaCilento, AKA "the twins", and AKA "trouble and troubles double". The following account is mostly accurate, all accounts of this real life adventure are purely fictional, and, any resemblance to the actual events/persons is merely coincidental.

Thursday night about 20 brave souls courageously boarded the Great Escape with high hopes of reaching Cortez Bank. Cortez Bank is a large seamount about 100 miles west of the California Coastline in the unsheltered and unpredictable ocean. Anything except a dive boat, or perhaps a boat of nutzo surfers, would probably mostly consider the area to be nothing more than a navigational hazard. Statistics quoted were, that, 1 in 5 scheduled trips to Cortez don't make it. As far as we knew, every expedition that has at least made the effort has "come back", so, we at least went to bed hopefully optimistic.

The Great Escape departed at about 10pm with Capt. Don doing his night duty at the helm. Until about 2:30am the seas were relatively calm, but after that, the wind and the waves picked up a bit, making sleep just a bit harder to get. At about 5am some divers began giving up trying to sleep through the "rock and roll", and, by 6am many people were up realizing that we were probably going to actually make it to Cortez, only 16 more nautical miles to go.

The first sight we saw as daylight appeared and we neared the bank were the famous waves that have attracted the hardest of the hard core surfers to Cortez. We estimated the size on this morning to be between 15 and 20 feet. 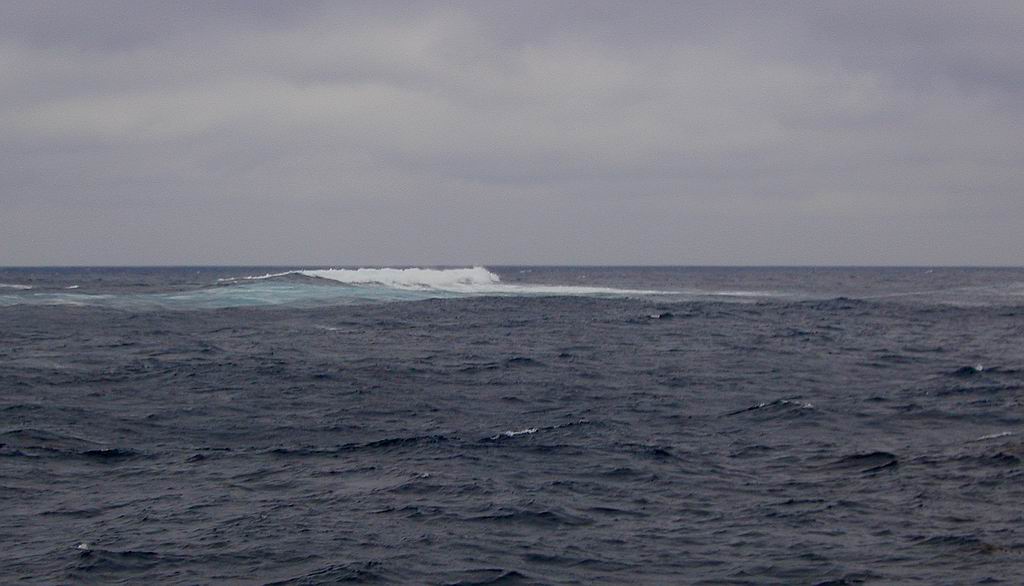 Capt. Tim anchored the boat at a place he refers to as "Secret Spot #1". The swells were approximately 6-8 foot, strong currents seemed to be absent, and with great joy, conditions were deemed to be divable. Eager adventurers took that Giant Stride of Faith off into the unknown. The landscape at "Secret Spot #1" was somewhat like a mesa with lots of Bull Kelp, purple Coralline Algae, and rocky outcroppings. 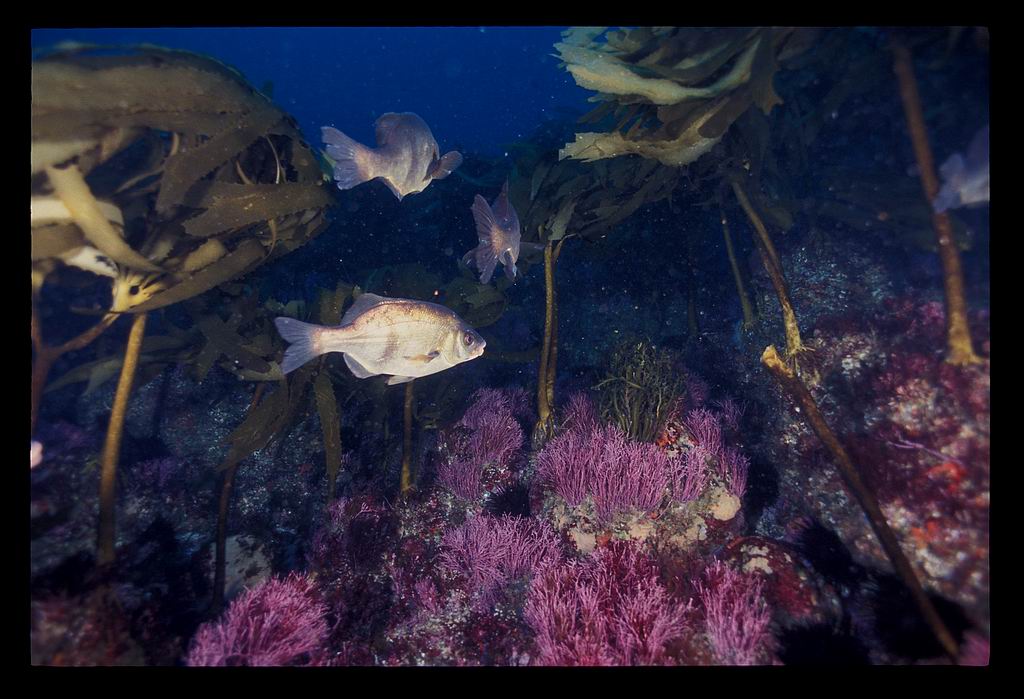 The 15 to 20 ft surge made getting around a bit of a challenge. I found the hand over hand method, using the bull kelp as stability bars, to be my ticket to getting me where I wanted to go. A couple of times the strength of the surge almost liberated the mask from my face.

Somewhere along the dive I crossed paths with "Bug Hunter Bill" and photographed a series as he bagged his first bug, and the first bug of the trip. 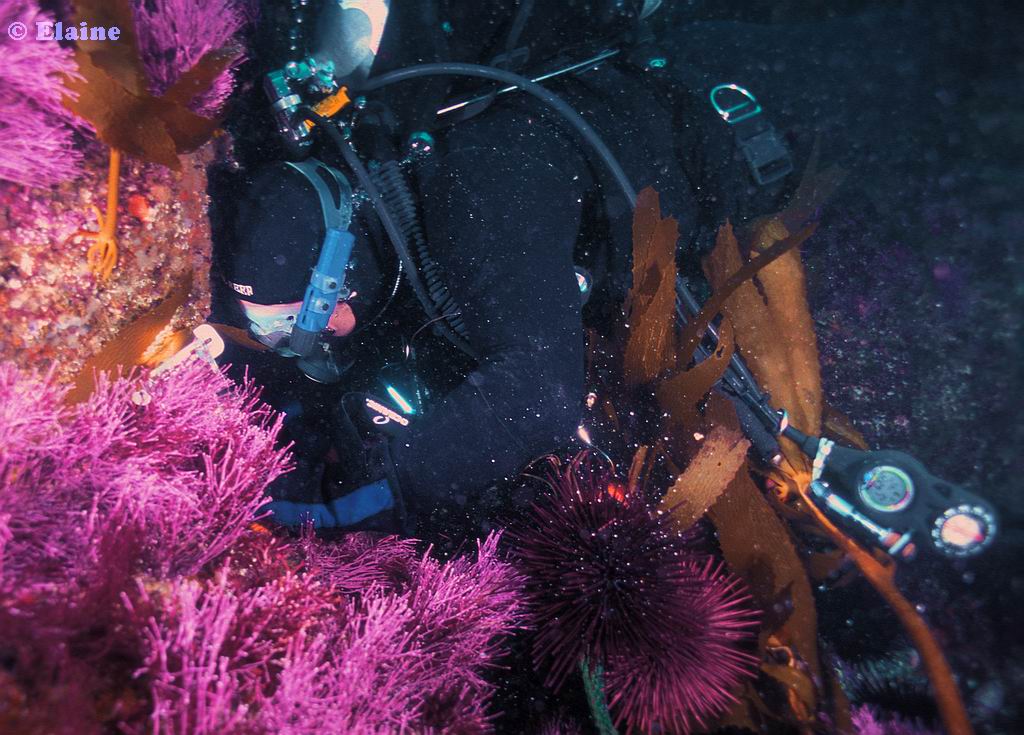 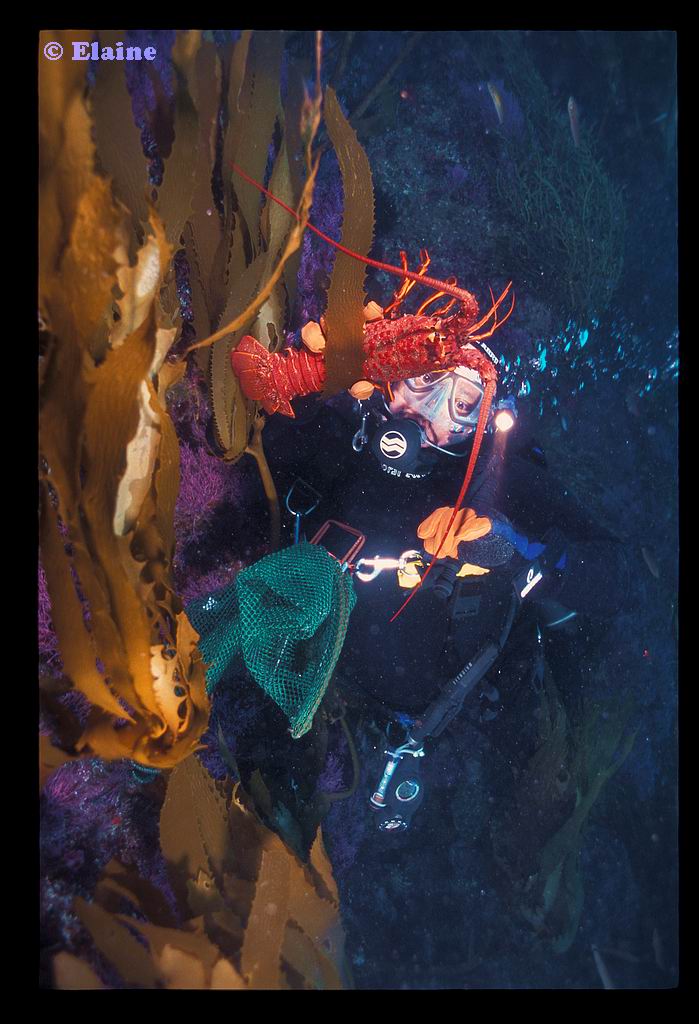 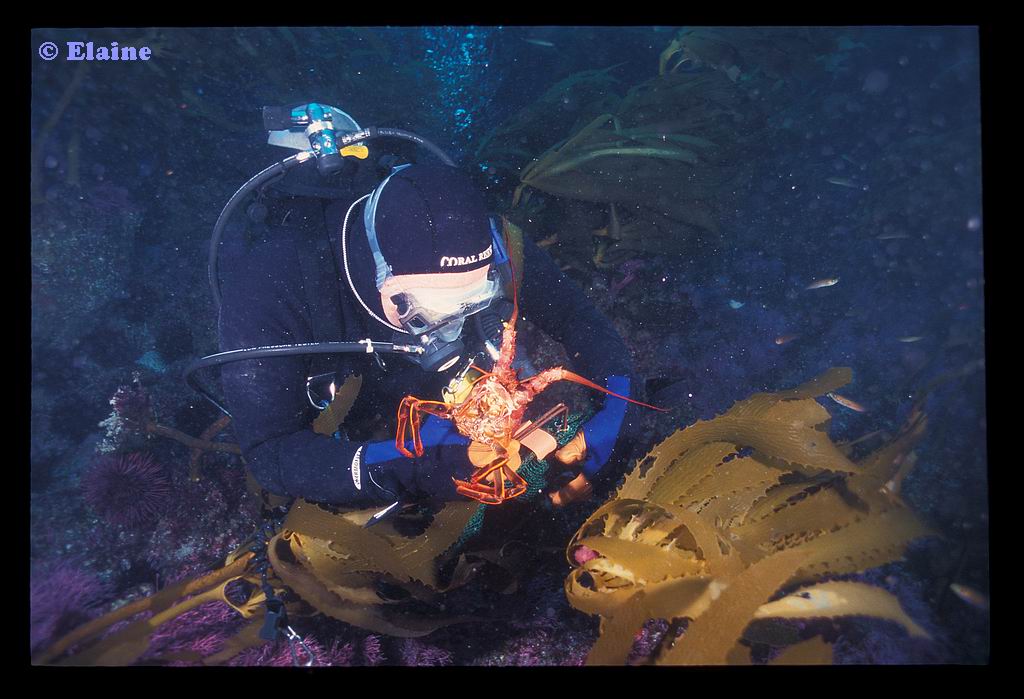 After that, I decided to quit fighting the surge, give up on trying to get decent photos, relax, and just experience the amusing surge and the decent visibility. When I began to wonder exactly where the boat was so that I could plan my assent, I noticed something pretty incredible - at 65 feet the entire boat, the chase boat, even the line from the boat to the chase boat were all clearly visible. They looked deceptively close. I had to check my depth gauge to be sure I really was still at 65 feet. It was a sight that I've almost never seen in 12 years of diving Southern California. 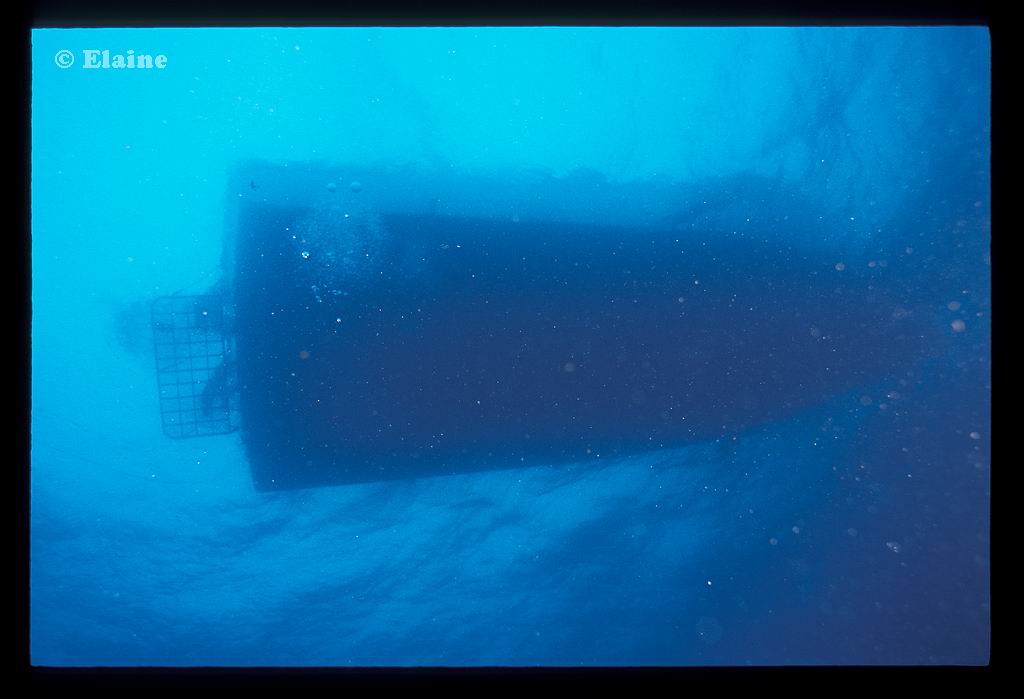 Everyone safely found their way back to the boat, with no current and such excellent visibility it was hard target to miss. Everyone was hungry for more of what Cortez had to offer. In the mean time however, during our dive, the weather had started to deteriorate. The 6 to 8 foot swells were showing signs of growing to 8 to 12 feet. Capt. Tim took faith in the fact that there were some of Southern CA's most experienced divers aboard and tried to advance to a place where he thought the bottom surge might be a bit less, and a great dive more of a possibility. He moved the boat a little bit closer to the red buoy. As the anchor dropped at the second dive sight, a sudden holler of "TIM, TIM" came from the back of the boat. Sure enough, trouble had arisen, and a true adventure at Cortez had begun. In the swells, the line to the chase boat had become entangled on the propeller shaft. The chase boat was now totally secured right next to the mother ship and the hull of the Great Escape was actively pushing the Boston Whaler underneath with each passing swell. 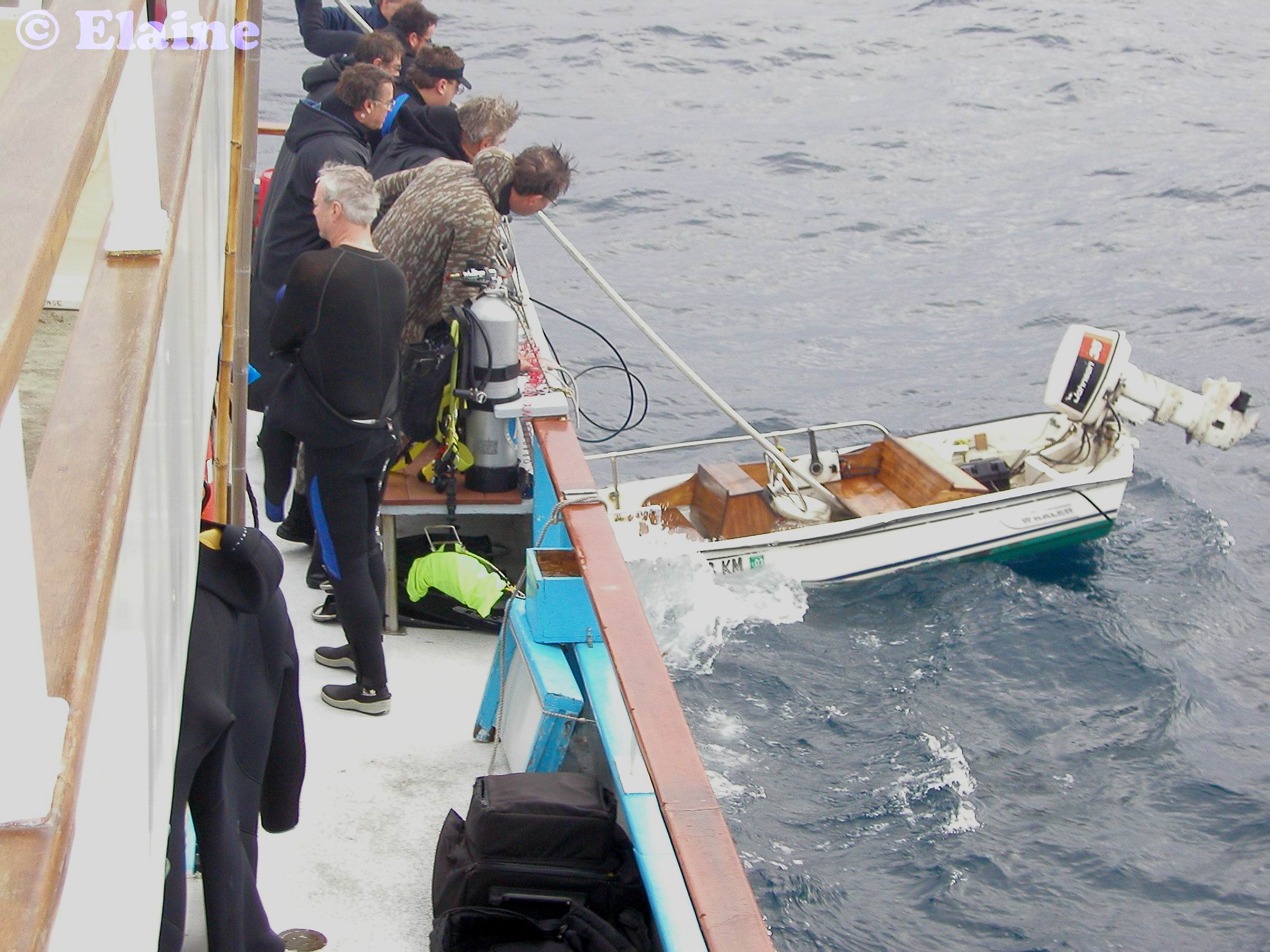 The first order of business was to cut the line to the chase boat - easier said than done - but with every kitchen and dive knife on the boat drawn - the mission was accomplished. The flooded Whaler was secured again to the Great Escape, and, the second order of business arose - clearing the entangled line from the propeller shaft was begun. Steve and Mike, willing to do anything to get more dive time in at Cortez, donned their tanks and braved the surge near the propellers to try and clear the line. We were now adrift, with a potentially disabled prop. Steve and Mike worked hard to clear the line, but, they just couldn't get it untangled or cut, the line was Kevlar, and, had been sold to Tim with the assurance that it was nearly impossible to cut or break Steven and Mike kept at the task and finally had it at least under control enough to regain safe use of the propeller. Our trip hero's were christened - Mike and Steve, as well as the crew that saved the Whaler, the propeller, and the trip.

The "emergency use only" Whaler was out of commission, the weather and surf conditions had turned to more hazardous. With some remorse, we started the several hour trek to Clemente. Navy exercises closed much of the island and surrounding waters, but the Pyramid Cove area was open for diving. The first afternoon dive at Clemente was pretty awesome, great visibility and diving conditions. 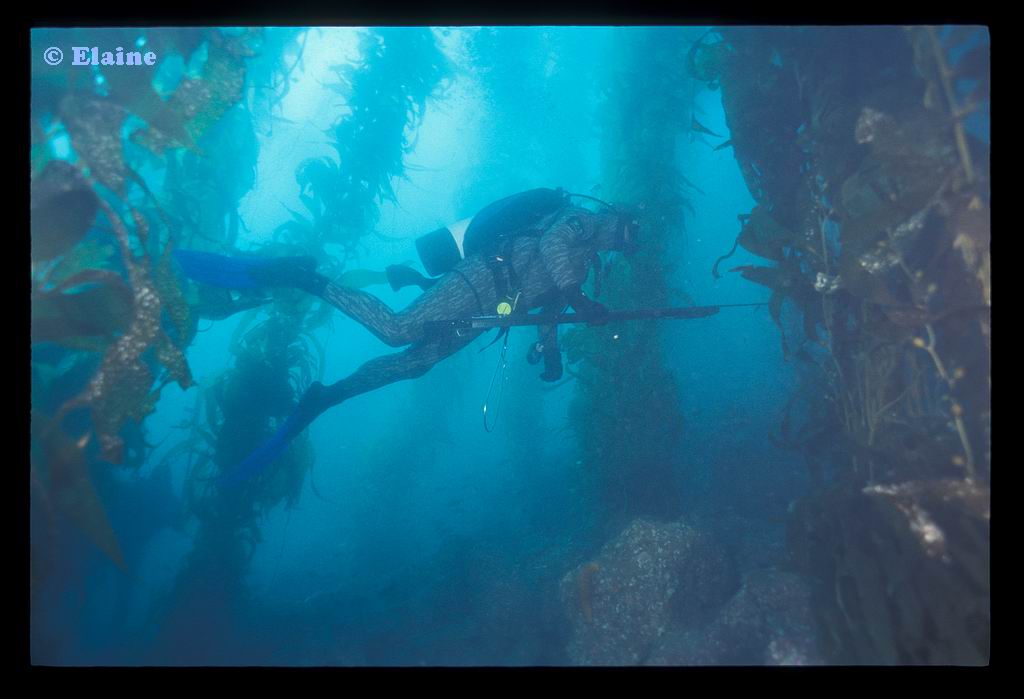 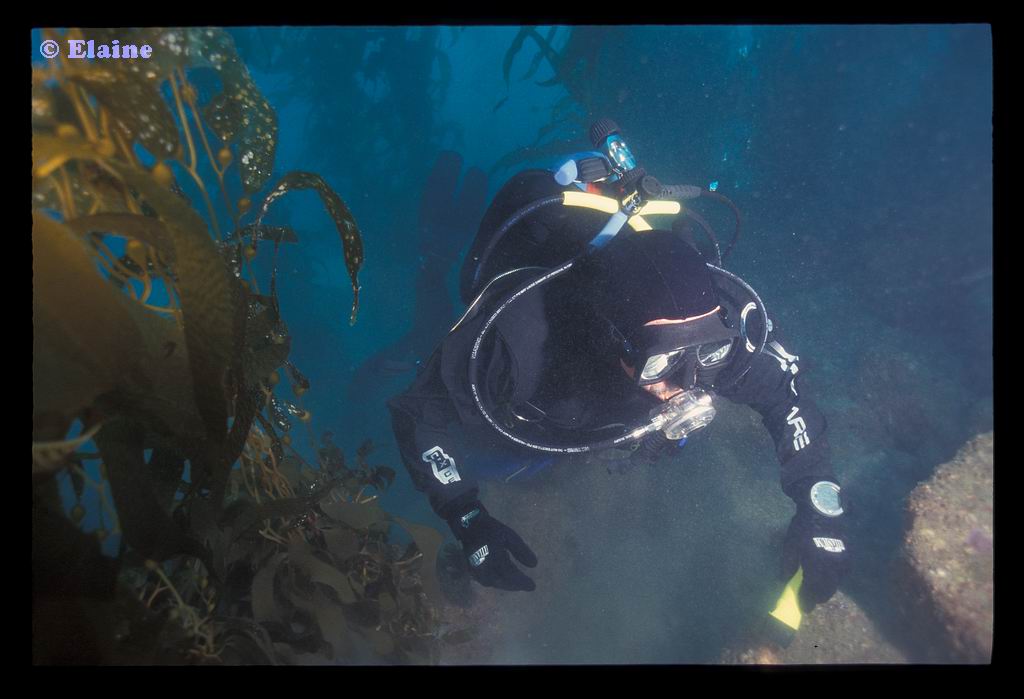 By the end of the first dive someone had cleared all remaining Kevlar line from the propeller shaft. 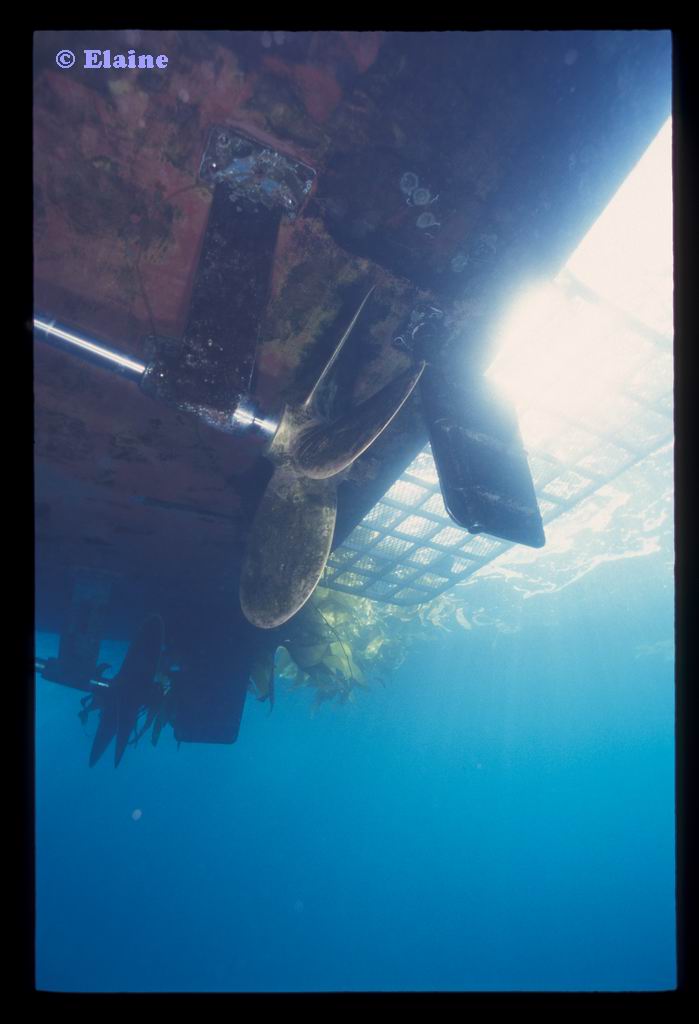 The second dive, near the boilers, was strictly a lobster mission - less visibility but potentially better lobster terrain.

Because Clemente was living up to its reputation as "Island of the Shorts", the group opted to travel over to Catalina for some night lobstering. By 10:30 we were anchored for diving at Catalina. The lobster hunting proved to be good and the diving continued until about 2:30 am. One of our group members was treated to an unexpected find - an entire lobster filled bag that someone from another boat had lost and left, probably earlier in the day.

On Saturday we continued to dive Catalina near the Isthmus and at Jerry's reef. Those hunting lobsters seemed to be having good luck there. I liked Jerry's reef the best. I practiced some macro on top snails and found an eel agreeable to being photographed. 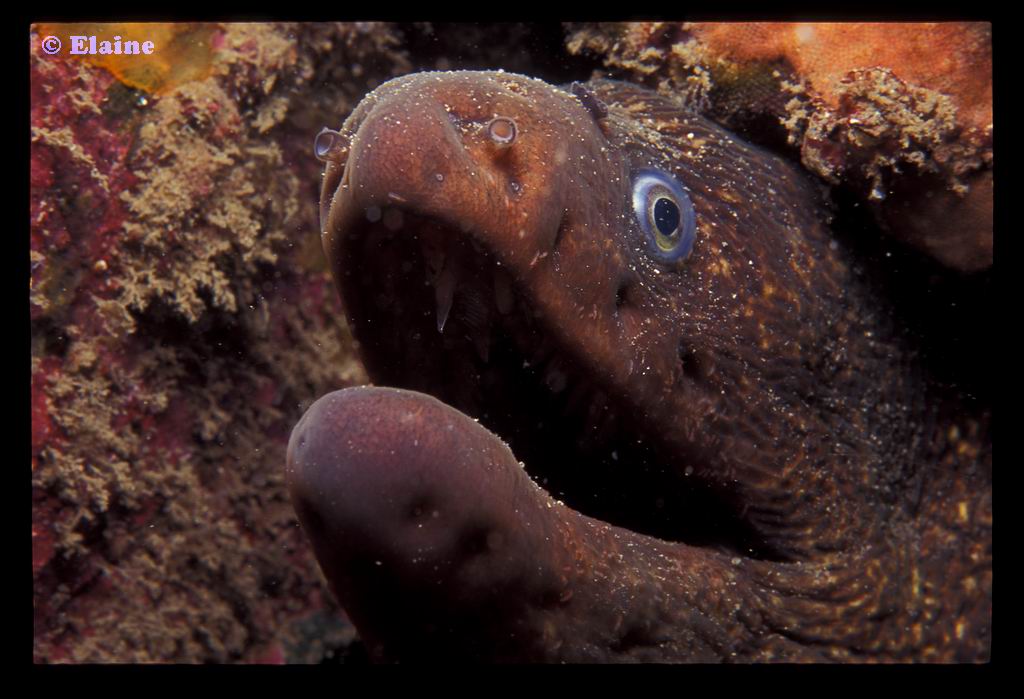 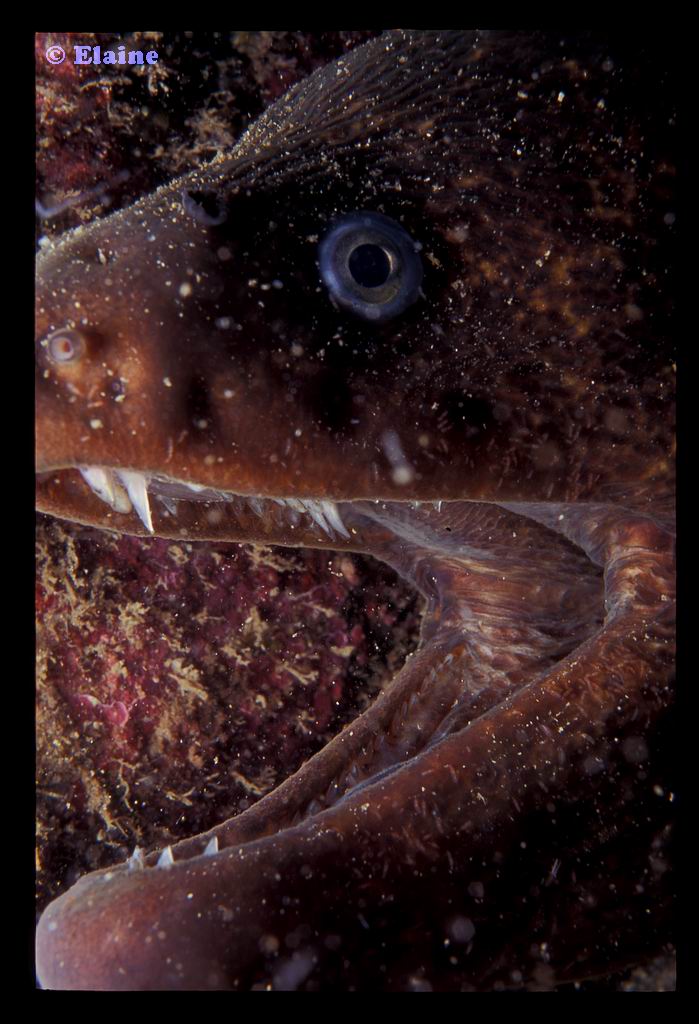 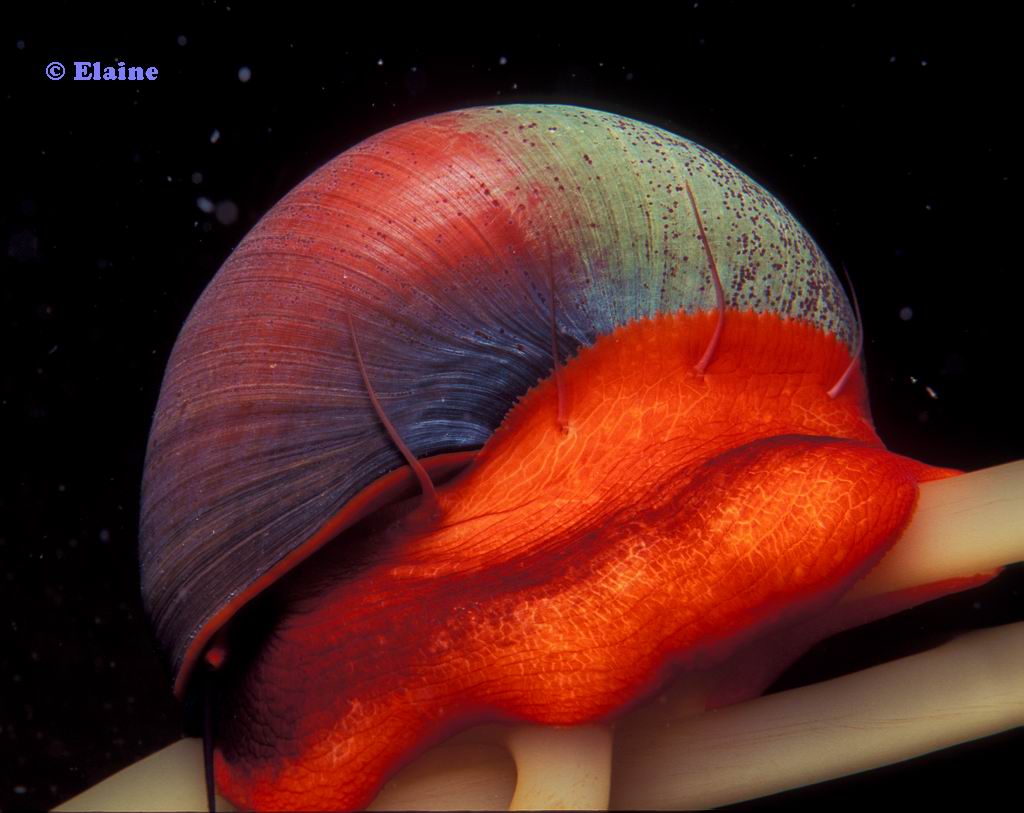 We returned to Long Beach happy, knowing that the ocean had let us be one of those lucky 1 in 5 that make it to Cortez. 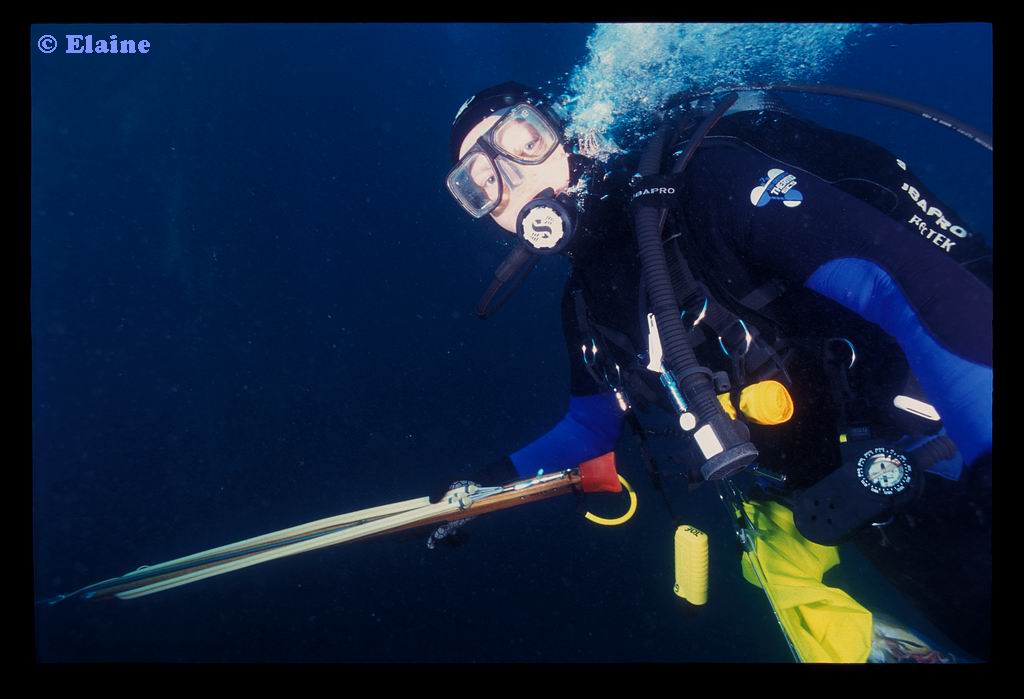