The trip to Catalina wasn't bad, some gentle rolling swells, but, no mean winter chop. The anchor dropped for our first dip in the pool at Indian Rock.

Dive #1 was fairly tame. There was only a slight current, and maybe, I repeat maybe, 30-40 foot visibility. Indian Rock has some great terrain; piles of rocky reef with characteristic nooks and crannies, separated by patches of sand. Garibaldi, sheephead, small kelp bass, and huge schools of juvenile senorita escorted by a few adults showed up for work. The sheephead were especially friendly.

The nooks and crannies at Indian Rock were stuffed with black urchins, blacksmith, lobster, and at least one huge moray eel. On the way back to the boat, I found several McFarland's chromodorids, and, wondered if that was some kind of signal that this might be a good year for nudibranchs.

The second dive at Indian Rock was a little tougher. The boat positioned itself mostly with its bow westward and stern eastward, but was circling a bit with the wind. The current had picked up and was running from the east to the west. OK, take the anchor line down and you were already down current from the boat. I decided not to stray too far on this dive. Swimming in currents has never been my strong point. Near the anchor line I saw other divers who apparently had the same idea. They found that lobstering near the boat had some advantages anyway.

Wandering just a little up into the sand, I crossed paths with a group of students.

They proved that they could already dive with a little panache, and, got some pats on the back from their instructor.

I wandered away from the class and began to think about how I was going to make it back to the boat with minimum effort. Out of laziness, I opted for a "Jane of the Jungle" assent.

How to do a "Jane of the Jungle" assent to avoid unnecessary exercise in a current.

On this dive my assent plan worked. I boarded the boat and watched some of the students learn how to do a surface swim in a current. One student got a little tired, succumbed to that feeling of tight constricting neoprene, and, had the "help I can't breathe experience". I didn't have one of those until about dive #75 in my log book.

The third dive was near Bird Rock at the Isthmus. It was a nice calm dive with the stay shallow or "hit the wall" option depending on how much depth you had left on the computer. Assuming of course your computer is working. I checked my air after my fill, 2962. I jumped in, and, somewhere around 20 feet checked my air again, 2962. As I neared the 35 foot bottom under the boat, I checked my air again, 2962. Wait a minute, something is amiss. I checked my depth and my computer said I was still on the surface. OK, the darned thing is busted. I looked at the screen again and it all went blank, no depth, no time, no air pressure, no nothing. Well, none of that would have bothered our scuba pioneers so I decided to stay shallow under the boat. What is there to photograph at 25 or so feet - kelp

I enjoyed at least a 20 ? minute shallow, fairly stationery, dive until my tank seemed a bit lighter and I called it an early day. Heck, the sights topside weren't too shabby either

On the trip home many new open water graduates reviewed their log books, figured out the showers, and most importantly, learned how to get out of neoprene. 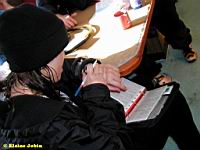 Crew members Mike and Freddie then made a huge hit when they passed out long stem roses to all of the females on board.

Valentines Day ended not only with flowers, but, with a perfect sunset as well 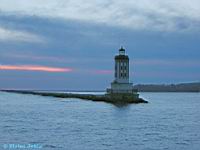 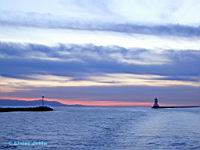