This is my "Trip Report" from the March 6, 2004 Sea Divers Adventure on the Great Escape to San Nicolas Island.

There was the usual flurry of activity as everyone boarded the boat and made their final preparations for the 11pm departure time.

I spent a little of this time following Capt. Don around with my camera. One of the things that I've noticed is that one of the captains always disappears, for a short while, to the engine room before the motors start. Have you ever wondered what the heck they do down there - feed the hamster? With some caution, I followed Don down those mysterious stairs, and, this is what I saw.

Who would have ever thought that what looks like a dark pit is actually a well lit space and that the engines on the Great Escape are painted green? (And they are GM 1271 @ 650hp each (per Captain Tim) - Gee ..... just what every girl wants to know). One of the things that Capt. Don was doing was checking the oil and fluid levels. Since I've never seen a service station at any of the dive sites, the answer to this mysterious pre departure activity in the "black hole" made a lot of sense. (As for the GM 1271 @ 650hp each - well, hopefully that will forever remain a mystery to me. Hum, GM, do you think somebody from Club Med named them?).

When the crew untied the ropes that secured us to dry land, no one knew exactly what the wind and wave conditions would be for our trip to Nick. Most of us hit our bunks knowing that Santa Barbara Island might be our alternative foul weather destination. Fortunately, this trip was one to be filled with many pleasant surprises, almost like the patron saint himself was sending us a belated Christmas gift. Instead of the anticipated night of "rock and roll" with frequent sleep disturbing wave slams that make you wonder if the boat has somehow managed to hit a deer, the night was very calm and peaceful. With daylight, there was no mistaking it, we were at Nick. 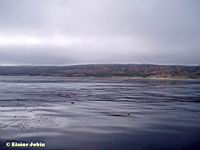 Somewhere around 6am we were in the water for our first dive. The 50-foot bottom greeted us with decent 30 - 40 foot visibility, better than most expected, and, a chilling 52 degree underwater climate, burr, it was nippy. There were many rocky kelp covered reefs within a short distance of the boat. I picked one long reef, slowly following its contours with my Nikons V and an extension tube, searching for macro subjects. Kelp, lemon nudibranchs, feather duster worms, Spanish shawls, and sea cucumbers were just a few of the hundreds of macro opportunities available here.

I sat out dive number two which was a short distance from the first dive site. Even with a dry suit, I was cold. Reports of more nudibranchs surfaced along with some lobsters and some fish. To stay entertained on a prolonged surface interval I photographed some of the divers as they climbed back on board.

Salt water always seems to do one thing, doesn't matter if it is warm salt water or "temperate" salt water. Our St. Nick water was clearing out our sinuses. Now I know why Captain Tim and Elvira are always watching divers with amusement.

We moved further down the island for dive three and four. Visibility here probably wasn't quite as good, but, the pleasant surprises from St. Nick continued. I liked the fourth dive the best. In fact, dive number four was one of the best that I've had in quite a while. First a sea lion came to play, took a liking to the photographers, and spent at least 20 minutes working as a model. He just didn't seem to get tired of us.

When we left the sea lion for a timely return to the boat we had another great surprise. A large Torpedo ray was waiting almost directly under the boat. He was simply hovering in 40 feet of water. This was the first torpedo ray that I have ever seen, and, he was a big one, maybe 4 feet plus. I had spent all of my film on the sea lion but I knew Chris Grossman still had plenty of space on his memory card. I wasn't sure exactly how the torpedo ray would take to posing with me for photos, but, since I really wanted my first close encounter recorded, I decided to find out. I swam up next to the ray. I saw the hair on Chris's beard start to stand up, but, like the dedicated photographer that he is, he put aside his fear that I was going to get shocked, and he started to take the photos of my "introduction to a Torpedo Ray" adventure. If I was going to get the "big zap", Chris was going to capture it on film - what are friends for anyway? At close range, maybe 6 inches, I felt a slight electrical buzzing kind of pulsation in the water around the ray, it registered in my brain that this was some kind of warning so I backed off just a bit. We continued to swim with the ray. He showed little fear of our close presence, and, maybe even got used to us. With more close encounters I no longer noticed the tingling feeling. I became fascinated with his small eyes, his large powerful looking tail, his proportionally small mouth, and the bright white color of his underside. We were definitely close enough that had he felt threatened he could have made this a very unpleasant encounter. Fortunately he didn't seem to think that we were edible or too disturbing. I doubt that I'll ever have the nerve to knowingly go this close again, but, because of his wonderful tolerance for my exuberance I'll now have warm and fuzzy feelings as well as respect forever for Torpedo Rays forever. They are truly amazing. 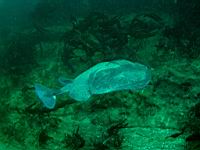 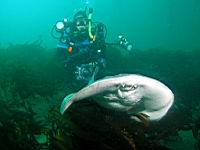 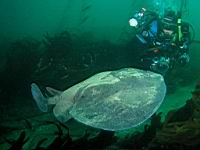 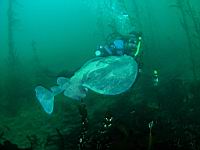 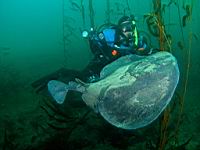 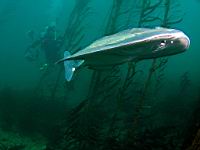 The 7 hour trip home was smooth as silk. But, our adventure didn't end at Nick. Shortly past Santa Barbara Island a whale spout caught crew member Terry's attention. First one, then two, then finally four spouts and whales were sighted. The boat maneuvered in for a whale watching side trip and these California Gray Whales didn't disappoint us. They let us come close enough, and stayed shallow enough, to let us clearly see their massive bodies. When the boat drifted just a little too close they flipped us their famous tails and ended one more terrific surprise of our trip to Nick.