Sunny clear skies greeted the Great Escape as it made the 7am departure from Long Beach. Ocean conditions were so smooth you could almost cleanly cut the waters surface with a dive knife. Well....that was the way it was until we passed the breakwater at Angels Gate. From that point until the anchor dropped at Catalina, the sun prevailed, but, the calm water conditions evaporated. Medium sized swells at short intervals ruled the San Pedro Channel. Another Catalina crossing in the Rock and Roll Hall of Fame.
The first dive of the day was at Yellowtail Point. Thick olive green water with 10 to 20 foot visibility greeted the giant stride. It was one heck of an orientation to California diving for the beginning open water class from Sport Chalet. Welcome newbies... to California diving.....we promise that it will mostly only get better....mostly. The beginning class headed to the sheltered sandy shallows. I headed north for the deeper water. I had hopes of spotting some leopard sharks or torpedo rays, but, visibility was so limited that I would have had to practically bump into them to see them. The bottom was the easiest thing to watch and it did offer some good opportunities for macro photography.
The sandy bottom at Yellowtail Point is far from barren. Lots and lots of phoronoids, tube dwelling anemone, and sabellid worms. I also found three mantis shrimp tucked in their characteristic shell lined holes. Three is my record so far in any one dive at Catalina. Armed only with my Nikonos V and 35mm 1:1 extension tube, I just couldn't get any of the mantis shrimp to agree to pose in the framer. 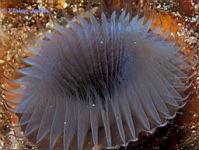 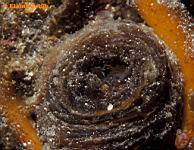 The next dive site was Emerald Bay. The plankton bloom was a lighter shade of green here, and visibility a little better, maybe 25 feet. In the rocky reefs I found lots of cleaner shrimp tucked in their cracks. Normally, when I find the shrimp, I can usually locate an eel near by. Search as I might, today there was no eel. What I did see, out and about, were a lot of various dead crabs. I must have counted about 15 of them during the dive. The cause of the crabs demise was uncertain, but, it was definitely the largest population of dead crabs that I've ever seen. There were some particularly nice Christmas Tree Worms on the rocky reefs here, as well as some healthy gorgonians. On the way back to the boat I found several small Navanax on the sandy bottom. The kelp crab in the photo below, was, you guessed it, dead. I tried to pose his remains in some kind of live action stance.

The current at Emerald Bay picked up during the dive, so, for the next and the last dive we moved to Lionhead. I have always liked this site because on the East side of the site there is huge rocky reef extending from shallows to about 100 ft. The West side of this site has a sloping sandy bottom that extends to the same depth. It is a ìsee the best of all terrain in one diveî kind of site. It is also the one place where someone always spots at least one of my favorite critters, the mantis shrimp. I took my Nikonos with the 28 mm close up kit on this dive. I saw several C-O Soles, mostly very small juveniles, but one about 7 inches long. I caught some mating activity among Kelletís Whelks. In the shallows several Garibaldi came and checked out the camera framer. I searched to check on the progress of the annual Garibaldi mating season and noted that they have started to cultivate their bright red algae patches, they just aren't very plush yet, and there were no eggs present. Also in the shallows I found a huge purple jellyfish. Back on the boat, sure enough, there were reports of a mantis shrimp ìright under the boatî ñ the one place I had neglected to look.

Just goes to show, even during a plankton bloom there is a lot to see in Southern California. You just have to forget the big picture and look for the small stuff. No matter what the visibility, just don't forget one thing ñ Clean Your Dive Mask! ñ or, you might miss a lot.

Congrats to all of the Beginning Open Water divers as well as to the graduates of the Advanced Open Water class. The sea was a lot calmer on the way home with all of those check out dives out of the way. Dive safe!