Trip Report: the wrecks of the Palawan and the Star of Scotland

Trip Report: The Sea Divers visit the offshore wrecks of the Palawan and the Star of Scotland on the Great Escape, June 19, 2004

The seas had been calm all week. Except for overcast skies with a little drizzle, it looked like it could be a day of great diving conditions at the Palawan and the Star of Scotland. 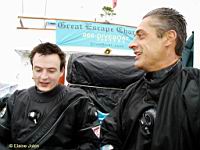 The Palawan was our first stop. This ship was intentionally sunk in 1977 to function as an artificial reef. It is approximately 440 feet long and sits in somewhere around 130 feet of water not far from Redondo Beach. Several large Purple Jellyfish were out and about for viewing on the way down the anchor line. At about 70 feet, the visibility opened up to about 30 - not bad for an offshore wreck. Captain Tim had put the anchor line right at “the pointy end” of the Palawan, so all you had to do was hop off and start exploring.

After the dive, it became clear that the anchor of the Great Escape just didn’t want to budge. DM Terry, armed with the lift bag and a Styrofoam cup, went to resolve the problem. Five minutes into Terry’s dive there was still no Styrofoam cup seen at the surface. Captain Tim began to worry “this is taking too long” he said. At six minutes there was still no Styrofoam cup. Captain Tim worried quietly aloud again “this is taking too long“. Finally, somewhere into minute seven the Styrofoam cup appeared and the anchor was drawn. As the anchor was secured strange looking long tan fibers were seen along the chain. When Terry reboarded the Great Escape we noticed that Terry was wearing some of the same unusual looking long tan fibers. What obstruction had proven stronger than the wench and the crew of the Great Escape? A sisal rope that someone had used as a guide line had become unwound, ensnarled the anchor, and ,secured it to the wreck below. In looking at my photos from the dive, I noticed that I had captured a ball of sisal in one of the frames. Could this neat, small, still packaged, environmentally friendly twine be what became the anchor nemesis?

We next went to the Star of Scotland for two dives. The Star of Scotland is a 300+ foot fishing barge located about a mile from the Santa Monica Pier. The water here looked a little greener than at the Palawan, and the visibility at depth was probably closer to 15 to 20 feet. This wreck is a little less intact than the Palawan and sits a little shallower in 80 or so feet of water. It has more sediment covering the sea life growing on the hull, but it is still quite a beautiful site to dive. Several black sea bass were spotted here. Another striking feature was the abundance and variety of nudibranchs. Some of these nudibranchs were so large they were almost appropriate subjects for wide angle photography.

It is always very amazing to me that people collect brass, china, and other things from shipwrecks. There didn’t seem to be any artifact collectors in our group. I looked around the Great Escape to see what would probably become a collectors item if the Great Escape were ever to become a “dive site” I photographed some of the things that I thought might be of interest. I showed Captain Tim the photos, and he just laughed and said “they are all 99 cent items“. Put them underwater and they become “treasure” - go figure. 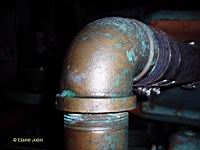 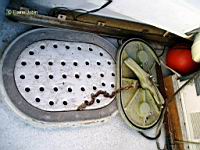 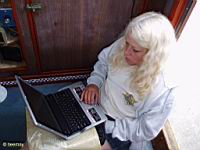 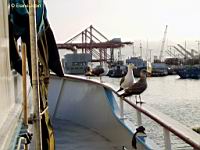