On Thursday night July 15, 2004 the Sea Divers set out on another fantastic trip aboard the Great Escape, this time to Begg Rock and Santa Barbara Island.

Long Beach was uncomfortably hot and humid Thursday night. It felt more like Florida than California. There was almost no breeze. The bright side of the tropical weather was that it had created ocean conditions perfect for our trip to Begg Rock. We spent the night traveling on calm seas, and, we were greeted in the morning by cooler air, sunshine, and one big beautiful rock. 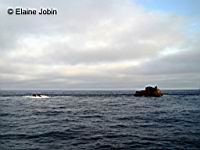 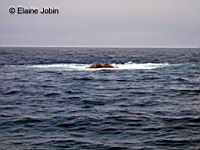 Begg Rock is geographically the last piece of "land" between California and Hawaii. Topside it consists of one large jagged outcropping of rock, a couple of small near by "boilers", and, a bright red whistle buoy that makes its distinctive sound every five seconds. This was my first trip here. I had been looking forward to this dive for months, and, my curiosity as to the underwater landscape and marine life was insatiable.

Captain Tim anchored the boat at an area where the underwater landmass came to within 20 feet of the surface. The short trip down the anchor line dropped you off at a departure point where you could stay as shallow as you liked or venture off as deep as you liked. Visibility was only about 30 feet in the shallow areas. Below 60 or 70 feet it opened up to perhaps 100 feet or better.

Purple anemones dominated the shallow landscape. Small white metridium dominated the deeper landscape. Large brown sponges were also prevalent. Purple hydrocoral was present on the westerly side of the rock. Hermissenhda crassicornis nudibranchs were everywhere. Invertebrate life was so dense that it was difficult to put a hand on the landscape without feeling that you might be damaging something living. It reminded me of the landscape in Fiji.

The divers hunting scallops were not disappointed. Plastic bags full of scallop meat were the norm for many divers on the boat.

We enjoyed three dives at Begg Rock. With each dive the current picked up a little.
By the end of the third dive we were flapping in the breeze as we made our safety stops on the anchor line. It was time to call it a day for diving at Begg Rock. We then made the 8 or so mile trek to San Nicholas Island.

At Nic, the anchor dropped, the gates never opened, and the anchor was raised. The Navy had closed the island and kicked us off of our dive site. We settled in for the trip over to Santa Barbara Island.

We dove at Santa Barbara Island for the rest of our trip. Visibility here was excellent, at times seeming to exceed 100 ft., I have never seen Santa Barbara look as good as it did for us. The sun was shining and there was only mild current. We dove some of the best sites including Black Caverns and Sutil. Inside the cavern I tried some wide angle photography, but it was so dark in there that it was mostly an exercise of frustration. I have much better luck photographing dark caverns with my Nikonos V wide angle, and, I had only my housed camera. I guess that doing the cavern shots will be a project for the future.

One of the things that I realized about Santa Barbara Island is that it is really very "Pink". Pink gorgonians dominate the landscape – as well as those ever present brittle stars. Baby nudibranchs were everywhere and in many different varieties.

We enjoyed our great sit down dinner of barbecued ribs and chicken at our Santa Barbara anchorage. At the end of our second dive day we had a wonderfully smooth ride back to Long Beach.

Some of the very lucky divers on this phenomenal trip were: 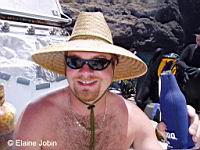 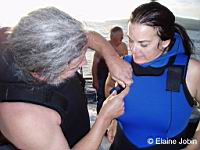 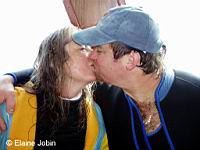 We had one surprise visitor at Santa Barbara: A man on a wave runner who had come all the from, some said, Dana Point by himself. He stopped by the Great Escape for some supplies. 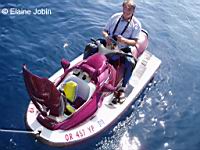 I don’t know anything about Wave Runners but traveling so far on one seemed both adventurous and risky. I guess that to non divers, our dive trips seem both adventurous and risky. It is all a matter of perspective. We don’t always think about it but with every dive we take a risk. Every time that we go outside of our comfort zone in life we take a risk. Sometimes we get burned, but most of the time, taking risks is how we get some of our most fulfilling experiences.

Everybody dive safe. Until next time: