On Saturday, August 28, 2004, The Sea Divers set out for our local Oil Rigs Eureka and Ellen on the Sea Bass. This is the story of the groups latest adventure. 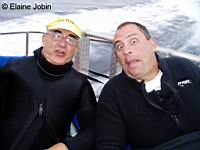 Thirteen divers boarded the Sea Bass for the 7am departure from San Pedro. The past several months have given us some of the best summer diving conditions that we have had in years, and, prayers were offered that this day would be an excellent one too.

The trip out was a smooth 40 minutes. The captain and crew introduced us to themselves and the boat, a 40 foot, 16 knot, convertible - California style. C Cards were meticulously checked - thank goodness I had remembered to bring mine. Ocean signaling devices: sausages and whistles were required and available for the needy, free of charge. Everyone on board was an experienced rig diver, but, an extensive briefing for Oil Rig safety was given anyway. Once business was over the captain and crew relaxed for the start of a fun filled day. 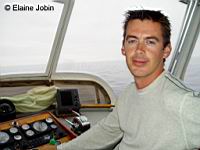 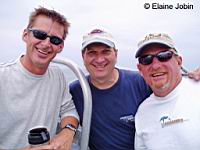 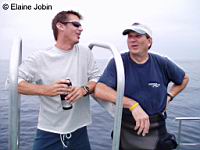 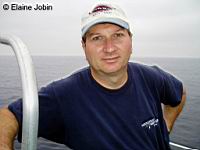 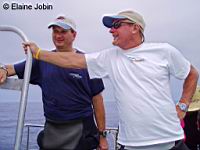 One of the things that everyone noticed was the black eye that Carol was sporting. Carol told the story of hanging in the Kelp last weekend on her "safety stop" when she was rapidly approached from below by a Great White. Thinking quickly, Carol turned head down and reached out to scratch the nose of the 16 footer. As the shark immediately tamed, it inadvertently bopped her facemask in his trancelike state. The black eye was actually the result of the reverse squeeze caused by the force of colliding with the mesmerized, several hundred pound fish. Kudos to Carol for her sharp mind and fast action in the face of such danger. 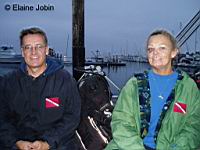 Well......that isn’t exactly the real story. The real story was actually pretty mundane and boring, so boring in fact that I can’t even remember it. Anyway, everyone hopes that it gets better soon.

Our first stop for diving was at the Oil Rig Eureka. Sea Lions greeted our approach for the live drop off. Everyone eagerly suited up for the first dive. 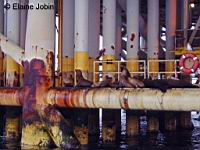 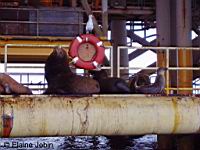 It was early in the day and the sun was still covered by the morning marine layer, but, the 80 - 100+ visibility and calm diving conditions made for excellent sight seeing. Sea Lions, Rock Fish, Sheephead, Garibaldi, Opaleye, Schools of Blacksmith, and Schools of Mackerel Jack were some of the fish that we saw.

There were lots of smiles after the first dive.

The sun grew brighter on the second dive and the excellent visibility continued. Some divers were treated to a mola-mola sighting, but, I missed that one.

For part of this dive I watched a diving bird. If you look closely, I captured him in the middle left of this photo.

On the surface interval we proceeded to the Oil Rig Ellen. 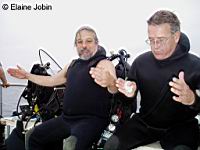 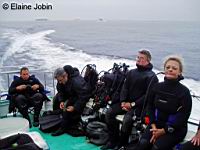 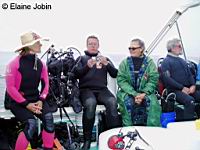 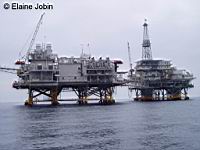 At the Ellen, the schools of mackerel jack were an awesome sight. I could have made a two hour safety stop here just watching them.

We relaxed on the deck for the smooth trip home. The fold away chairs on the Sea Bass are really comfortable - when you go, be sure to try one out. It was another fantastic day of diving for the Sea Divers. 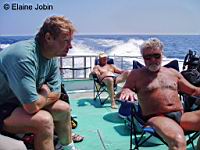 How did I do diving after my trips to the chamber? Great. I spent the last month or so doing a lot of time at the gym and walking the dog. That helped me to keep some muscles for diving. I drank lots and lots of water before and during the dive day. I wasn’t too careful about staying "shallow", but I made sure most of the dive was part of a very slow assent. I stayed 3 minutes away from deco and did 5 minutes plus at 15 feet on every dive. Fortunately, it all worked.