On Thursday September 16th I went on a shark diving trip with Catalina Scuba Luv. I took the early morning Catalina Express from Long Beach to Avalon. 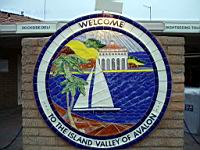 After checking in, and, signing the releases at Scuba Luv, I boarded our dive boat, the King Neptune. Robert Kennedy was our Chief Shark Wrangler and Captain for the Day. 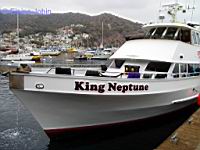 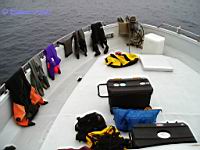 The other divers on this trip were from the UK. They had been out on the previous days shark dive and had been skunked - an entire day of effort and no sharks. Captain Bob blamed the poor results on a lack of wind and current. Today, the wind had picked up a little and they planned a different offshore site.

Once underway, the crew set about making the chum. Chopping up something that would be appealing to any passing sharks was a major production that took several hours. Passengers were invited to assist in the process if they so desired. I’m in the photos below helping to dice tasty fish chunks. I hoped that the spice of my "elbow grease" would add that "special something" to the chum. 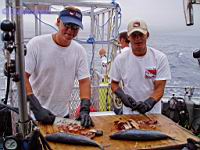 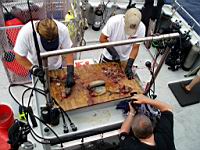 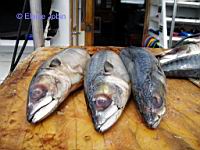 The last of the chum making process involved adding fish oil as a marinade. The completed concoction was then placed into a chum dispenser.

Next, we drifted with the current while the chum drifted from the chum dispenser into the ocean. All that we could do now was to wait and to hope.

After chumming for about an hour and a half, the shark cage was lowered into the water. Today the water was very clear with about 100 feet of visibility. It was easy to clearly see the cage and its contents from the boat. 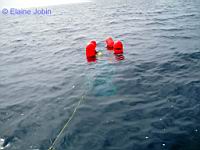 Any divers who wished to sit in the cage and wait for the sharks were welcomed to do so. I was off the boat and into the cage without hesitation. I hoped that if the sharks could actually see something in the deli section, maybe they would come. I sat in the cage, at about 10 feet, for an hour. There wasn’t much to do but watch the chum go by. As I waited, I day dreamed of a visit from a great white. I planned the photos that I would take and wondered exactly how I would handle such a visit. Eventually, I did get some visitors, but, it was just two of the Brits who got tired of waiting on the boat. I spent another half hour taking some photos and swimming around with the divers. Finally, after an hour and a half, I decided to climb out of the water and see if it was lunch yet.

As soon as my camera was in the rinse tank and my feet were on deck, someone started shouting "shark". With 1900 psi still in my tank, I reclaimed my camera and I rolled back into the water. As I swam back to the cage I got my first glimpse of the shark. It was a small maco, and then another shark, a blue.

This was the blue shark.

The blue shark was actually quite shy and stayed only for a few minutes. The maco was much bolder and stayed for several hours. These were some of my maco shots.

What was interesting, was that once the sharks arrived, no one chose to stay in the shark cage. Everyone was out in the blue fending for their photo ops - divers in a total "photo frenzy". When I ran low on air, I took a surface interval and then jumped back in to shoot another roll of film. The maco was still there, and in my absence two blues had come and gone. The maco continued to hang around until the chum stopped and then within minutes he too was gone for good.

On the trip back to Catalina, those shooting digital reviewed their "catch" with pride and satisfaction. I crossed my fingers that I had captured something good on film. It had been a good day. 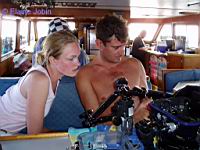 I boarded the Catalina Express for the trip back to Long Beach. Just when I thought the excitement was over - I noticed something very different. Several members of the Coast Guard had boarded my boat and it looked like I was now on a ship commandeered by the Coast Guard. OK...... were these "Coasties" or terrorists dressed like "Coasties"? Man....Just when I thought that it was safe to get out of the water. Was I going home or was I being hijacked, or worse? If it was the Coast Guard on the boat why were they there?

After blatantly taking many photos of the uniformed men, one of them approached me. "Ohhhh S.....T" I thought. He asked me if he could see my camera. He then asked if he could see some of the photos that I had taken. "Ohhh...S...T I continued thinking as I scrolled through the digital images for him and explained that I had been out to Catalina on a shark dive. Next, to my surprise, he said "those photos of me aren’t really very good, how about if later we pose for you". "Whhhheeewwww" I thought. "Sure" I said.

Officer Gonzalez then stayed and struck up a conversation. He explained that he was a "Sea Marshal" as part of a program with the U.S. Coast Guard and Homeland Security. He is similar to an "Air Marshal", except an air marshal is not uniformed. The Sea Marshals are now traveling routinely on Catalina Express boats. He explained to me what they do and, that if there were an actual terrorist threat aboard the boat, they wouldn’t handle it by themselves, the Coast Guard would be much more involved. Officer Gonzales then went around the boat talking to passengers and spreading the word about their presence. He was actually extremely personable, reassuring, and informative. 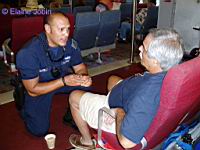 Later, as agreed, Officer Gonzales and the other Sea Marshals met me on the back deck for a short photo session. Thanks guys! 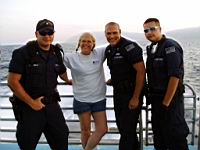 At the end of the day, I braved the freeways and arrived at home safely. Until next time: