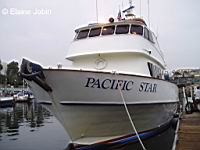 One of the things that made this such a special trip is the fact that on September 15th 2004, David Homer Harvey, owner of the Pacific Star, officially became a US Coast Guard licensed 100 ton boat captain. To celebrate Dave invited a group of friends out for a day of diving at Catalina Island. 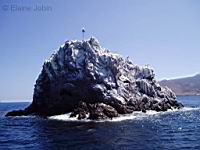 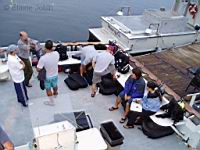 Dave has been on the Pacific Star since June 2001 when the boat first came to Southern California; first as a DM and a crew member, later as the owner, and now as the owner and Captain. Prior to that, he worked for years on the Pacific Dream. Dave also brings to the Pacific Star some international flavor as he has served as crew on 6 of the 12 Aggressor Fleet Boats. He is also a PADI dive instructor and has certified approximately 700 divers.

I have known Dave for at least 10 years, and Iĺm still learning things about him that I didnĺt know. Dave started diving in 1973 when he signed up to become a Rescue and Salvage diver for the US Navy. He did this for four years, with assignments as far away as Crete. When I asked him what his favorite salvage operation was he quickly replied "my relationship with Sonja". Dave and Sonja recently welcomed a new family member into this world - Emily Harvey.

Our dive sites for this day of celebration were Eagle Reef, Ship Rock, and Isthmus reef.

At Eagle Reef I headed to the sand on the western side. The rocky slope is covered with kelp and many gorgonians.

At Ship Rock I went to the sand on the northern side in search of some Angel Sharks that I had heard had been hanging around there. I didnĺt find any Angel Sharks but the schools of Jack Mackerel were incredible.

At Isthmus Reef I took the wall towards the green buoy. I briefly saw one Giant Black Sea Bass cruise by and a large bat ray in the sand. This wall has so much life and so many critters that I could dive it over and over and not get bored. One thing I noticed is that I didnĺt see any lobsters.

Michael made swordfish for lunch.

Everyone sends special thanks to Dave for the great day of diving and CONGRATULATIONS on the new set of official papers, and, the newest crew member - baby Emily.