October 2, 2004 was the first day of "Lobster Season". Everything about diving in Southern California changes on "Opening Day". It marks the date when dive boats become populated with divers toting game bags and lobster gauges.

Lobster season redefines the criteria of a good dive site from "scenic" to "productive". Particulate matter in the water column rises dramatically as at least 20 of your boat mates head straight for the sandy bottom.

This time of year can be both challenging and frustrating for underwater photographers. The good side is that there are more night dives available and more trips to dive sites that are "off the beaten path."

I spent the first day of "Lobster Season" diving offshore Palos Verdes with SeadSea dive shop on the Sundiver. Captain Ray and the crew pushed off the dock somewhere near 8:30 am. 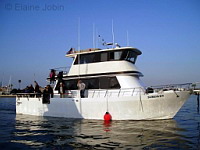 The late departure meant extra sleep for me. The start of lobster season meant less sleep for others. Some divers on this trip had already been out shore diving since midnight.

The first stop was near the lighthouse at Point Vincente. This area is bordered by a submarine canyon and has many rocky reefs in the shallows.

Visibility was 30 - 40 feet, excellent by Palos Verdes standards. I stayed in areas about 40 feet deep. Small purple urchins dominated the landscape, and invertebrate growth was everywhere. There wasn’t a lot of kelp, but the reef structures seemed to provide good protection for many schools of juvenile fish.

Divers who headed toward shore brought in the most lobsters.

For the second dive, the Sundiver moved towards Redondo, past the wreck of the Dominator. The landscape in this area was different from the Point Vincente area; there was a kelp bed and many sandy channels. I found several bat rays in the sand and many schools of juvenile fish. 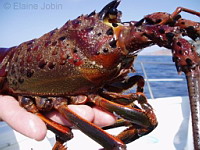 On the third dive, we moved closer to the wreck of the Dominator, a Liberty Ship that met its demise on the rocks in 1961. Captain Ray pointed me in the direction of the stern section of the Dominator. It was about 250 yards away, in about 20 feet of water, near a high rock that was just barely breaking the surface.

I decided that my best bet for making it there was with a surface swim. It took about 15 minutes of swimming and dodging kelp to make it to the rock. Once there, I got lucky and dropped down directly on a fairly large intact section of the ship. It had an interesting shape, but it didn’t look like much from above. A large school of Sargo congregated near by.

.
When viewed from the sides, this structure takes on a whole new character. It is really quite a scenic spot.

Not every dive day is uneventful, and this one was no exception. A diver experienced a cramp in his leg and was busy retrieving a wayward game bag. In the distractions, he put his hand down in exactly the wrong spot on the swim step. A passing swell produced a crunched and cut finger. Within 15 minutes bay watch arrived and got him on his way to professional treatment. Everyone sent prayers for a quick and easy repair job, and, for a speedy recovery. Even for the very experienced, diving is a hazardous sport and sometimes we are reminded just how lucky we are that most of the time nothing goes wrong. When something does go wrong, it touches all of us deeply.

Our dive day ended with a gentle ride back to Long Beach.

The final lobster count for the day was 16. Our DM remembered the photos that I had posted of him counting heads at Farnsworth a few months back.:

He decided that it was time for "pay back". He posed me for a photo and made me promise to post it. So....here it is.....my best imitation of a lobster. 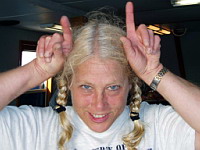