Trip Report and Photos: Wrecks and Reefs on the Sundiver

On Friday November 5th, 2004 I went on the Sundiver Open Boat. Captain Ray, pictured below, welcomed us on board.

A pleasant surprise for me was that Harold Buchanan was one of the passengers. Harold was one of the original crew members/DM’s on the Pacific Dream, and prior to that on the Atlantis (Remember those dive boats?). For anyone who may remember Harold, this is what he looks like today. 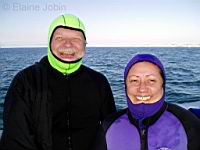 We spent our day diving in the vicinity of Palos Verdes. All dive sites were ones that I have never done before. Everyone on board was an advanced diver, so our stops were picked accordingly.

Our first dive of the day was at one of Captain Ray’s secret wreck spots. Captain Ray thinks that this is the wreck of a 54 foot, steel hulled, fishing boat that sank in 1980, named the African Queen. This wreck has not yet been positively identified, however.

To make the dive a down line, with a float on one end and a 50 lb weight on the other, was dropped next to the wreck. Captain Ray explained that this helps to avoid anchor entanglements. The dive was then done by live drop off and pick up. These are photos of our down line.

Visibility at this site was a little challenging for wreck viewing - somewhere between 4 and 8 feet. When visibility is better, I bet that this is a beautiful wreck. It is covered with anemones and loaded with sea life. I saw rockfish, lingcod, sculpin, several kinds of crabs, and many more things that I can’t even begin to list. I wanted to bring up some great photos of this wreck. During the dive, I found that I didn’t have functioning strobes. All of the photos below were taken with natural light and occasionally, with the little bit of help that my flashlight could offer. Remember, it was dark and visibility was very limited. You might have to squint to see these.

I hope that someday I get to go back and do this dive again. I think that strobes would really make this wreck come to life.

Next we moved to a place called Tyrone’s Reef. We went down the anchor line and exactly at a depth of 62 feet visibility went from 30 - 40 feet down to about 6 inches. Somewhere around 70 feet my fins hit bottom - but I couldn’t see it. I went back up to 60 feet and found that everyone else was up there too. We checked to see if we could find a nearby area with better visibility, but, there was no break in the muck. We finally gave up and aborted the dive.

The next surprise from this site was that the anchor wouldn’t budge. Captain Ray suited up and made the dive to go and free it. I tagged along as Captain Ray’s "dive buddy". This time I just about ran face first into a patch of striking hot pink anemones. Clearly, the reef that Captain Ray had chosen must be an absolutely beautiful one - just not on this day. These are some of the photos that I took of Ray making his “bow entry” and of his brief dive.

The Sundiver then set out in search of underwater visibility. Our next stop was at a site called Avalon Rocks, not far from the wreck of the Avalon. As the name implies, this area was very rocky, and, kelp was sparse. There were many schools of fish here and some Giant Sea Bass. There was some debate as to weather the Bass were black ones or white ones. These are some of the photos from this dive, what do you think?

Our last dive site of the day was at the wreck of the LCM3, a landing craft. Visibility here was about 30 feet. This wreck is not as marine life rich as others, but, the remaining structure does have a lot of character.

On the way home we watched the underwater video of the UB-88. Capt. Ray did some narration, but still gave no clues as to the location of this Submarine. Clearly this submarine is Captain Ray’s baby. He reminded us that he had looked for it for 20 years. I carefully watched the video, later did some homework, and, with some assistance from Chris Grossman determined:

I don’t know exactly how tall a submarine is, but, based on the fish life present would guess that the a UB-88 lies somewhere between 110 - 165 feet. Am I right Captain Ray?
(He will never tell).

So ended a fantastic day of diving