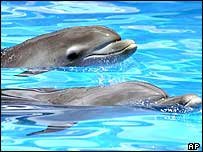 A group of swimmers has told how a pod of dolphins protected them from a great white shark off New Zealand's coast.

The lifeguards were training at a beach near Whangarei on the North Island when they were menaced by a 3-metre shark, before the dolphins raced in to help.

The swimmers were surrounded by the dolphins for 40 minutes before they were able to make it safely back to the beach.

Marine biologists say such altruistic behaviour is not uncommon in dolphins.

Lifeguard Rob Howes was in the water with two colleagues and his teenage daughter.

It was an uncomfortable experience, as they were circled by a great white shark, which came within a couple of metres.

He said around half a dozen dolphins suddenly appeared and herded the swimmers together. The mammals swam in tight circles to create a defensive barrier as the great white lurked under the surface.

The swimmers said the dolphins were extremely agitated and repeatedly slapped the water with their tails, presumably to try to deter the predator as it cruised nearby.

The drama happened in New Zealand three weeks ago, but only now are the lifeguards telling their story.

It is a day they will never forget, especially for one of the swimmers, who was on her first day as a volunteer.

They have no doubt that the dolphins acted deliberately to protect them.

Researchers have said they are not surprised. A marine biologist insisted that dolphins, which are considered to be one of the most intelligent mammals, "like to help the helpless".