Last Sunday was another great day for "winter" diving in Southern California. There was lots of sunshine, the air temperature somewhere around 70, the ocean calm, and, at least at Catalina, the visibility excellent. On this last weekend before Christmas, I expected most people to be out shopping instead of diving. Wrong! The Sundiver was filled with enthusiastic divers, some of whom are pictured below. 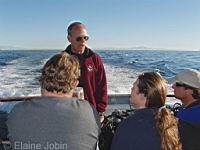 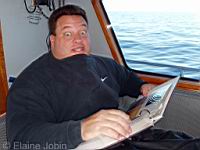 On the way out to Catalina, it was kind of hard not to notice Eric Frasco, from Dive and Surf, teaching a marine life specialty course. I listened in for a little bit and found myself reminded of some things that I don’t often think about, such as the difference between fish stripes, bars, and bands (page 12 in the Paul Humann Coastal Fish ID book). 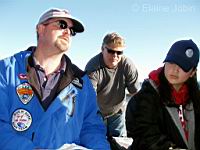 Captain Ray made the first anchor drop at Isthmus Reef. The boat hovered about 20 feet above the "high spot" and it was one of those wonderful days where you could look over the side of the boat and clearly see the bottom. Some divers stayed on the shallow reef, some headed off the South wall for the (130ft +) intense lobster territory, and, I dropped down the west wall. I met the bottom at about 96 feet and kept an eye on the channel hoping to see some form of larger marine life go by. On this day I didn’t see much except blue water. I checked in some of the rocks for lobsters and only saw one or two. This was one of those dives where I became so involved in just looking around that I didn’t take many photos, I just enjoyed the scenery.

Back on the boat, I found out that one diver had maxed out his lobster limit on this first dive of the day. He did the final inspection of his catch and he posed for a few photos. I don’t know exactly what happened, but, his voice was just a little bit higher for the rest of the day. Maybe you can figure it out.

The next dive was further east near Yellowtail Point. I always like this site because I’ve had a wide assortment of marine life encounters here including leopard shark and angel shark sightings. Today was bat ray day, I must have seen at least ten of them.

I really enjoy watching bat rays. When they forage for food along the bottom they stir up quite a bit of sand. When they are startled they can stir up an entire cloud of sand. Sheephead gather around and forage for food in their wake. I also saw a very small torpedo ray who ran away faster than I could grab a photo. Some of the bat ray photos are below.

Between dives the sun continued to shine and relaxing topside was very comfortable in the great weather. 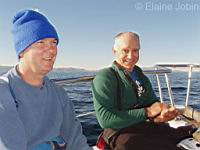 The last dive of the day was at a site called Gibraltar. There is a large rocky reef here that runs perpendicular to the island. I saw many lobsters in the rocks as well as several small eels. There is a memorial plaque imbedded in the reef that I tried unsuccessfully to locate. Some of my photos from this dive are below.

On the way back to Long Beach we were treated to a great sunset. It was a perfect ending to a great dive day. 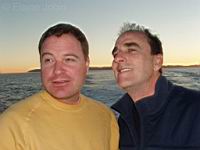 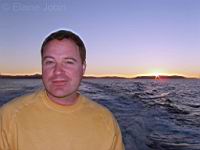 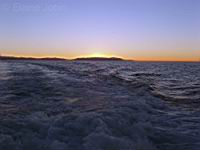 Until next time. Hope that your Christmas is a "Knockout". 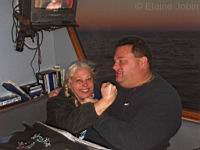