Twas the day after Christmas. I figured that everyone would be at the stores instead of diving. Wrong again. The Sundiver was full divers headed to Catalina.

The first thing I did was to look around to see who had new Christmas dive gear. Actually, there didn’t seem to be much new stuff on board. A buddy pair showed off their new fins, and, other than that, it was mostly the same old, same old. 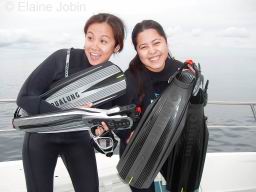 It seems that when divers get equipment they like, they stick with it.

I was just happy to be on the boat. I had to work Christmas day and on into the wee hours of the next morning. When I got home at about 3:30am, I looked at my bed and I looked at my truck. I knew I’d better just get into the truck and go to the boat because if I looked at the bed again, my dive day wasn’t going to happen. I had to be extra careful diving, because when I’m really tired, things like this almost start to look normal.

The morning weather at Long Beach was changing from nice, to cool and cloudy. The storms were clearly on their way. Everyone was hopeful that the diving conditions would hold until the end of the day. 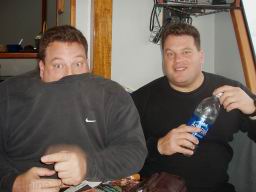 Our first dive was at Eagle Reef. I went west over the reef and down to the sandy 90 foot bottom.. I saw a large Mantis Shrimp out walking around. Wow! This was the first free roaming shrimp that I’ve come across and I really wanted a photo. I ducked down behind a kelp plant to get the camera ready for a wide angle close up. I tried to mentally prepare for a possible attack on my dome port by mantis shrimp claws.

When I was ready, the shrimp was nowhere in sight. I searched over the sand and finally found him ... sitting back in his hole. What had been a good sized shrimp was now a mere small pair of eyes on stalks in a large sandy landscape. I backed off and watched him for a while hoping that he would once again venture out of his lair. I was surprised to see that every time a sheephead would swim by he would duck for cover. I wouldn’t have thought that a sheephead would be much of a match for a mantis shrimp, but, the shrimp appeared very leery of them. This is my 20mm wide angle shot of shrimp eyes. The photo was cropped a lot. 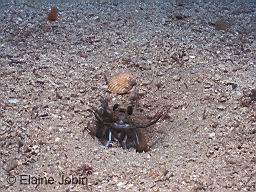 Back on the boat ALMOST everyone was happy with the way that their dive day was going so far.

One person wasn’t so happy. He was a diver visiting from Georgia. During his dive his dry suit had flooded. He quickly figured out why when he saw the air relief valve, which was supposed to be on his left arm, floating in front of his face.

He said that he had tried to save time and money by having a repair shop in Georgia replace this valve before his trip to California. Now his vacation itinerary would include an extra stop at the DUI repair shop in San Diego.

Our next dive site was at Parsons. 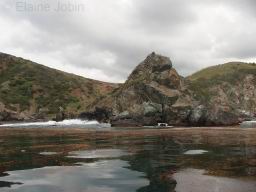 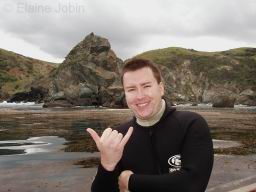 There were lots of isolated rocky reef sections here. Visibility was good, but there was a lot of surge in the shallower areas. I was so tired that all I really felt like shooting were gorgonians ... something big that wouldn’t move. I came up with some really mundane photos. 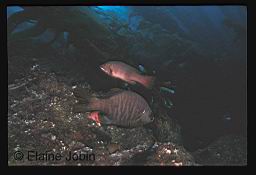 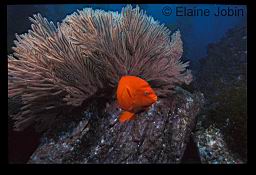 Our last dive was at Eagle Nest. I shot some 1:2 macro with Kodachrome 25. It won’t be back for a week or so.

I got one hour of sleep on the way to Catalina and one hour on the way back. I don’t know how everyone was still looking so awake after the last dive.

Thanks to the Sundiver crew for spending the day with us instead of at the Mall. If it wasn’t for you guys, all I would have done on the day after Christmas is sleep. Hope that everyone had a great Christmas.