On Thursday, December 30th, 2004 the Sundiver did a Noon to Midnight dive trip. It was a great dive trip not only because there were afternoon and night dives but also because one winter storm had just passed and another was on its way and the diving conditions were much better than expected. The later than usual departure time also gave everyone some extra time to sleep.

We departed Long Beach into moderate swell and we saw lots brown water from the storm runoff. We arrived at Catalina in calm seas and saw lots of nice blue water. Wow! What a difference 20 miles makes! The island itself was a striking lush shade of green. 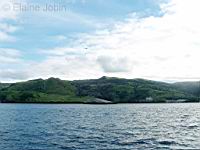 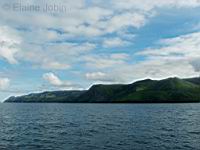 Our first dive site was the "high spot" in the isthmus channel - some call it "Hidden Reef". Visibility was 30 - 40 feet and the water temperature was in the upper 50’s. It looked like there was a mild surface current running to the east.

The high spot of this rocky reef is at about 65 feet. The reef itself is dominated by bull kelp and gorgonians. During the dive I saw lots of sheephead, blacksmith, garibaldi, and rockfish. I also noticed that the current was quite strong between 30 and 50 feet and made a mental note not to loose track of the location of the anchor line. 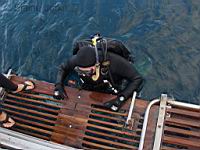 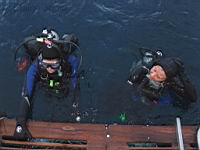 Several divers did miss the anchor line for their ascent. They surfaced downstream and for them it was a long climb on the current line to get back to the boat.

Carol experienced a regulator malfunction during her dive. She heard a "pop" as she took a breath, followed by unstoppable free flow. Her regulator is configured with an H valve so her dive buddy merely turned off her primary to stop the flow and she uneventfully switched to her octopus. On top of all of this distraction they surfaced with several lobsters. 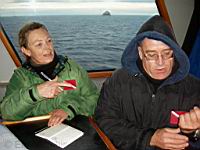 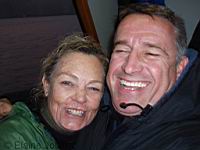 During our surface interval we enjoyed a terrific sunset and we watched Captain Ray suit up to retrieve the stuck anchor. 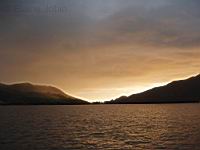 Our first night dive was at a site called "Gibraltar". During my dive I followed the sloping reef. I saw at least 12 eels tucked in the nooks and crannies, often sharing their shelter with several lobsters. There were also plenty of sculpin on the rocks. I looked unsuccessfully for the memorial plaque that is at this site. All photos from this dive are out for processing (K25)..

The return trip to Long Beach was very smooth. The crew served some hot buttered rum to anyone who was willing, and, it was really, really good.

The boat became very quiet a short time after we departed and I think almost everyone ended the dive day getting some quality sleep on the way home. 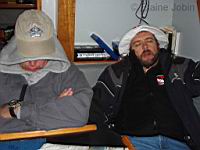 Thanks to the Captain and Crew for staying up so late!