On Saturday, January 22nd, 2005 I went on the Sundiver Open Boat to Catalina Island. It had been more than a week since our last big winter storm and I wasn’t sure how good the diving conditions would be.

The morning channel crossing started with fog and gentle rolling swells. On route we navigated around a few large chunks of floating storm debris. When we arrived at Catalina we had bright sunny skies and very calm water.

Our first dive was at the site where the 37 foot Bertram "Toro" met an unfortunate fate during a storm on November 21, 2004. Most of the remains of this boat sit off the Catalina shoreline in about 15 feet of water. We could see the outline of the hull from the deck of the Sundiver. 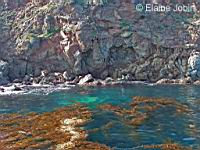 I did a surface swim though the kelp and storm debris (mostly grass and bamboo) to the visible hull. I dropped down to considerable surge in the shallow water. The visibility at 15 feet was amazingly good. These are some of the photos that I took in this area.

Next I headed to deeper water and saw more pieces of the boat and some personal effects spread over the bottom. The deeper that I went the more the visibility dropped. At 95 feet visibility was only about 10 feet. This was the "freshest" wreck that I have ever seen. It was very sad. In surveying the remains it seemed obvious that this was a boat that was "loved" by its owners. There were blankets, towels, and some personal effects mixed in with stray pieces of the hull. Pages from a dive log book were resting between leaves of kelp plants. Most wrecks that we dive are "sterile" in comparison - stripped down remains of hulls with no evidence of human inhabitance.

When I got back on the Sundiver, I jokingly said "hey, I found a wallet". Several people looked at me with surprise and said "You did?". "Nah. Just kidding". Not five minutes later Doug W. climbed on board waving a plastic bag that actually DID contain a brown leather wallet. He had seen a piece of plastic bag sticking out from under some of the debris - he had pulled on it - and - violla a wallet!

A table in the galley was cleared for cleaning the things that had been brought up by the group from the dive site. A drill, a plaque, a plastic wine glass, a pair of goggles, some fishing gear, and a DVD (Ironically, James Bond "Die Another Day"). 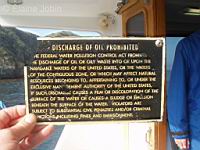 Captain Ray soaked the wallet and its contents in a bowl of water. He wanted to get it cleaned up for a happy return to the owner. For a brief while the table became a drying rack. Contents included $20, some credit cards, a PADI advanced OW card, some grocery club cards, a Costco card, an El Pollo Loco discount card, a college ID, a CA drivers license, and a Social Security Card. He put in a call to the owner of the boat that a wallet had been found at the site. 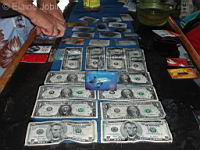 The pages from the dive logbook were intact and clearly legible - even after spending 2 months underwater. The owner had filled in all of the information on the personal information page in his SSI logbook - Name, address, phone number, social security number, age, height, weight, allergies, next of kin, etc.. In an era of identity theft, maybe filling in this information isn’t such a smart thing to do. (Fourteen years ago, NASDS used a divers social security number as their C-card number. I asked to not have my social security number used and put 123456789 on the application instead. To this day, that is my C card number - very easy to remember - just, nobody ever believes it). The personal identifying information has been blurred on the logbook photos below.

After a sunny surface interval we went to our next dive site near Gibralter.

Visibility at this site was poor, only about 15 feet. Depth didn’t make a difference. I opted to shoot with my Nikonos 35mm close up kit here. These are some of my photos. The sheephead were having a "standoff" when I interrupted them - one held out a little longer than the other.

Our last dive was done at the Isthmus. Conditions there were good with at least 30 feet of visibility and a very mild current. I saw several bat rays and a large jelly with lots of ruffles that I think may have been a moon jelly. I shot macro with Kodachrome 25 on this dive and the film is out for processing.

Our trip home was very smooth. Captain Ray continued cleaning and polishing the contents of the wallet. The owner is never going to believe that it was underwater for two months! 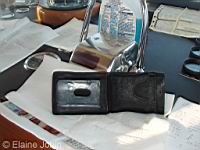 Some divers enjoyed the sunset over a bottle of wine. 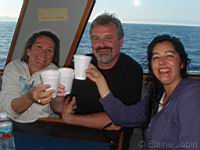 Doug, the wallet finder, was smiling - Capt. Ray gave him the trip - no charge!

All of the divers are thankful that everyone who was on the Toro is safe and we hope that all of your ill fate is over - at least for a lifetime.