On Sunday, February 20th 2005 I went on the Sundiver to Catalina.

It was pouring at my house when I left for the boat on Sunday morning. An hour later, when I arrived at Long Beach, the rain had stopped and the sun was peaking though the clouds. We even had a fairly smooth channel crossing to Catalina. 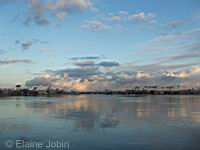 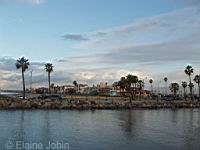 This outing consisted of ½ open boat, and, ½ private charter. The "private charter" was led by Becky Anderson. She was teaching a group of students from Private Scuba. The "open boat" was a diverse mix of divers escaping storm related "cabin fever". It was a full boat. 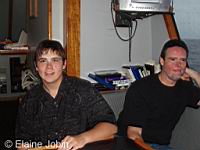 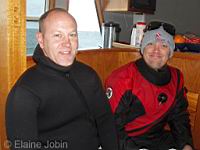 On route to Catalina we saw several "water spouts". These weren’t from funnel clouds. Two gray whales were playing on the surface. We took a brief detour to watch them but didn’t get too close so as not to disturb them.

Our first dive site at Catalina was Isthmus Reef. The visibility was down considerably from last weekend. Larger sized particulate material speckled the water column, probably storm related. The visibility was only about 30 feet. I took my usual route over the side of the reef to the 100 foot bottom. These are some of my photos from this dive.

One thing that I noticed was that the lobsters seem to be moving up. Prior to today, most lobster sightings that I have made here have been in the deeper water. Today I saw several small ones in the 80 foot crevices.

Our next stop was near Indian Rock. I headed out for deeper water with a macro set up but didn’t find much out of the ordinary. The deeper that I went, the worse the visibility became. At 70 feet visibility was only about 10 feet or so. On my way back to shallower water visibility improved and I ran across a porcelain toilet sitting in the sand. A guy must have been there before me because the seat was up.

For our last dive, Captain Ray moved the boat to a more sheltered cove. The wind had picked up and it had started to rain. Visibility in this cove was still 30 feet or so and the diving conditions were good. These are some of my photos from this dive.

It was raining at the end of this dive. I love watching the rain drops on the surface from underwater.

Of the two other dive boats that we saw, we were the first to head back to the mainland. The wind was blowing more strongly and the swells had blossomed into 4 foot rollers at short, multidirectional intervals. Predictions were for conditions to only get worse. I went up to the wheelhouse for a while and it was pretty interesting to watch Capt. Ray cut the smoothest path through the swells. It reminded me of a skier plotting a course through a mogul run. We had some rocks and rolls, with a few jolts thrown in, but thanks to Capt. Rays hard work at the wheel, most of us tolerated the trip home pretty well. Most of us... 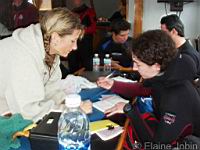 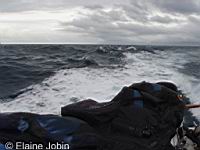 Winter diving in California is winter diving. Some days the crossings are smooth and some days they aren’t. On the rougher days don’t forget to secure your stuff. Make sure the breakables (like cameras) are safely stowed and close to the deck. I left my camera in the big rinse tank and it did great. My small ice chest where I usually keep my camera made a few trips across the front deck. Had I left my camera there I may not have been too happy. Remember to keep yourself low and never expect that the boat won’t take an unexpected roll or jolt.

It was another great dive day. Once again, thanks Capt. Ray and Sundiver crew! 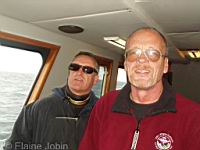