Story and Photos © Elaine Jobin.
These may not be reproduced in part or whole without my advanced written permission.

On Saturday, April 23, 2005, I spent a day at the Oil Rig Eureka. Part of what makes a dive day special is the diving and the dive sites. The other part is the boat that you take to get there and that you spend so much time on during the surface intervals. I chose the Second Stage out of San Pedro for this trip. I have never done a trip on the Second Stage before. It is a fast six pack, similar to, and docked next to, the Psalty V.

After my initial gear schlep from the parking lot to the boat, crew helped with the transfer of the rest of my stuff. As I settled in, I found out that Dave Nesham and Todd Winner, both serious photogs, were the only other divers on this trip. There was plenty of room for the three of us to relax amongst our spread of photo gear. 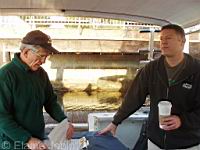 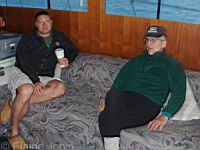 We enjoyed some Eggs Benedict (the new Pope breakfast special) and headed out at 7am. 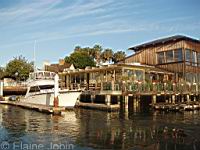 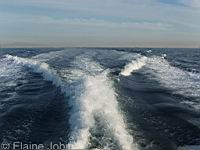 I took the Nikonos V with the close up kit on the first dive. It was a short up current surface swim to get to the rig structure. Visibility looked very limited. I picked a rig column and began my descent in the shelter that it provided from the current. At about 40 feet the visibility started to improve. Between 50 and 60 feet there was a chilling thermo cline and below 60 feet visibility opened up to perhaps 60 feet and more. I made my way to the shallowest metridiums that were at about 100 feet. The rest of the dive was a slow winding climb through the structure back to the surface. On some days the surge near the surface can make safety stops a challenge, but today the surge was very mild. These are a few of the photos from this dive.

One of the things that make the Eureka special is its population of sea lions. I did not have many underwater sea lion encounters, but, I got some photos during drift by boat passes on the surface interval.

Knowing that the conditions at depth were good, I opted to shoot wide angle on the second dive. I ran across Dave who was patiently photographing some shy blennies peaking out from their home in an empty mussel shell. I ran across Todd searching for his wide angle vistas. I also ran across lots of other divers. The Sea Bass and the PsaltyV had joined us so the population of underwater human rig explorers had increased substantially. Designated pick up points helped everyone to reconnect with the right boat after the dive.

During the second surface interval, we had some lively conversations of our photo ops and pitfalls over a hot lunch of Fajitas. We had all noticed some small brown and white striped fish darting in and out of the pilings at about 20 feet and we weren’t sure what they were.

On the last dive, I opted for macro. Even in my dry suit I started to feel chilled and it was very distracting. On the safety stop, I tried unsuccessfully to photograph the brown and white “unknown” fish - they just wouldn’t get in the framer. With my Nikonos 1:2 setup I mostly have to concentrate on the non mobile invertebrate life. These are a few of my macro shots

Except for the short trip back to San Pedro, our dive day was over. The captain and crew had done a great job at keeping us fed, comfortable, and safe. I didn’t notice a camera rinse tank on the boat. What they do instead is rinse each camera individually after each dive. No worries about rinse tank floods or scratches on the dome port. Thanks for a great dive day and the “sherpa” help to get all of my stuff back to the car.

When I got home I downloaded my dive computer data and realized why I was feeling so cold on the dives. The minimum temperature recorded on each dive was 50 Uwatec degrees. Burrrrrr..... I also looked up the “unknown fish” and I believe they were young Flag Rockfish. Now that I know what they are and where they hang out, they will be a photo challenge for the future.

Don’t forget Chamber Day is next week. If you have never participated, it is quite an event that you don’t want to miss.