A Time To Dive, The Raider

A Time To Dive

.
Let me tell you the rest of the story I didn't tell before. This is the story of the Raider.
.
Since I'm a wordy kind of guy, this story starts a while ago for me. I lived in
a magical place in a magical time. As it is in that kind of place, it was a time
of youth, passion, inspiration, beauty and folly. This was Santa Cruz in the 70's.
A place of primieval forests decending to wild windswept shores of pristine beauty
near cities of commerce, science, art and light. There was some fun diving as well.
It's probably not the kind of diving you would like. It was cold, rough, nasty and
has typical visibility of 6 feet or less, but I really like diving there. There was
one place in particular that I went diving at a lot, Greyhound Rock. It is perhaps
the toughest place to dive in California with tall cliffs, great white sharks, huge
green waves, elephant seals and very very dangerous currents. So what could I do?
I invited my friend Mel to go diving there. We had fun.
Time went on. Our lives took us all our seperate ways. I did a lot of diving.
Then, while diving on the Truth, more than 20 years later, I ran into Mel again.
He were a dive nut too.
.
I stayed in touch with Mel and occasionally got on a charter with him. It was fun
to get together for some good diving with an old friend. A couple of years later,
he went partners with his friend Alex to get a boat for diving. They started with
a strong 28 foot fiberglass hull, with a nice big Mercruiser outdrive. It's a good
size that will sleep 4 divers and carry all their gear. All boats take time. A
great deal of time, skill, money and love was put into this boat. It has a swim
step that is great for divers. They put a real strong engine in it so that it
will make Catalina in about an hour. They build a custom hard top on it to make
it roomy and put good canvas on it to make it stay comfortable in ocean conditions.
Its radar makes it safe to travel in fog and at night, but it is the differential
plotter that lets it put a diver exactly where he wants to be on a reef, pinnacle
or cave. The digital depth recorder is exactly what is needed to explore to find
the dive spots that the plotter remembers. Add red lights to to the boat to make
it a creature of the night. Then for that touch of comfort, add a hot shower with
enough water for everyone. You then have the Raider. The finest private boat for
diving I have ever been on.

Things change and things have changed, but for years, the Raider could be
found any Saturday morning anchored at Catalina. Most of the time departure
was Thursday or Friday night and the first stop was Catalina for 3 tanks of
night diving. The next day would start with breakfast at Isthmus and waiting
for West End Divers to open so we could get our tanks filled for the days
diving. The destination for the day might be anywhere at Catalina, San
Clemente Island or Santa Barbara Island. It was a short trip to any of them.
Then stop in Avalon to get the tanks filled again. On the way back to the
dock is the deep, wide open diving of the Horse Shoe Kelp.
While the Raider was a great dive boat, what it was really all about was the
nature and desire of the divers on her. This is about a kind of diving that
few people experience or even know about. Sure, the owners of the boat are
fanatic divers, but so also are their friends that they invite along. All of
them are experienced on boats and quickly learn the systems that make the
boat work. These are serious boaters and accomplished hunters who release their
instincts when diving. Diving amplifies their conciousness of everything
around them and stimulates their senses so that they are hyper aware of the
environment they are in. They see the animals and plants, but as a predator
they feel the moods and movement of the underwater life. Their senses expand
to feel the shape and detail of the terrain that they move
through. 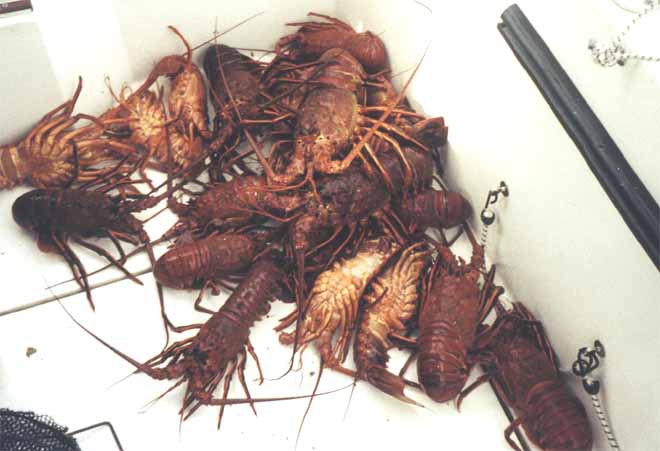 When it is the season, the main target is lobster and you wouldn't believe
how good some of these hunters are at grabbing bugs. Other times, it is the
season to free dive for yellowtail and white sea bass. Sometimes it is just
time to explore to see what is down there. In the plotter are numerous small
reefs that no charter boat would stop at and few private boats ever find. A
small bump on the depth recorder may be a deep ledge sheltering thick life
that is only visited perhaps a few times in years. Diving these spots requires
great skill to safely do the long, carefully controlled open water
ascents.
I and the other divers that have made these trips have been lucky to get to
do diving like this. We have seen all the moods of Channel Islands boating.
Calm weather, rough weather, cold, crisp, starry nights of winter lobster
hunting, warm sunny days cruising along kelp lined shores, blustery days dodging
incoming storms, crossing the channel at night looking out for huge swells.
Diving the cliffs of the front side and the offshore kelp beds of the huge
backside reefs. Always though is the natural peace that one feels when on the
ocean, isolated from the rush and tensions of what all our lives are. The most
difficult debate out here is the constant question of what the next dive spot
should be. The ocean is the place for the divers of the Raider. 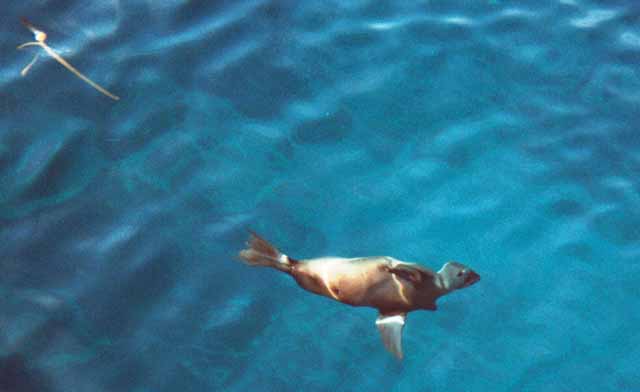 For me now, the time to dive the Raider is about the memories we can keep,
which is only natural now that she is gone. I remember trying to
anchor on nights so dark you couldn't see your hand and there was no
luminescence to show the water. I remember seeing crystal clear nights
when the stars look like jewels and the lights on the mainland shore look
like you could reach out and touch them. There were still, foggy mornings
when you think you might see a ghost go by in the mist and brilliant sunny
spring days when the short lived, lush grasses on the island made them the
color of an emerald. I remember sitting off shore on wash rocks during dives
just comtemplating the beauty that blessed me. I remember just sitting still
in the cabin between dives on frigid winter nights, waiting until we could
get back in the water. I remember that big night when crossing back to San
Pedro with Alex driving the boat as Mel and Carlos slept below. The crossing
was rough and then in the dark we both saw the huge swell that broke for a
hundred feet next to the boat. We turned to each other with that silent look
of 'did you see that'! I remember so many more moments from that
time. 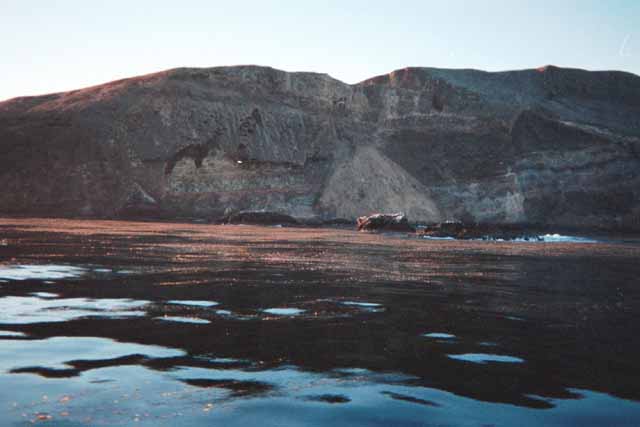 We did so many dives in so many places. I've already told the stories of diving
day and night. Diving blasted on antihistimines without realizing how they were
effecting me. Diving under thick elephant ear kelp with fishing lines everywhere.
Diving in the blackest places I have ever been. Diving in places of vital beauty.
Times bumping into Mel underwater and then seeing him just turn around and grab a
big lobster. This was not usually easy diving. It was diving for divers that have
to dive and part of diving is the challenge. I've told about that, but I've never
told the stories of what went on between dives.
Sometimes the times between dives and on the cruises was a time of silence, but
often it was a time of talk between friends. It might be about something seen on
the last dive or a trip to be remembered from the past. It might just be a funny
story or a discussion about the successes and failures of our families.
The time of the Raider was many years, but it is best not measured in days and it
is not always measured in dives. In that time were births, deaths, marriages,
moves, seperations and other changes. Life went on.
For Mel and I, talk might be more. We are both seekers that have taken paths not
commonly tread, for reasons not many would understand. Our souls carry marks
that include scars and lessons. On these trips, we would sometimes privately
admit what truths we thought we had found, to be understood or perhaps even
judged by another one of the rare people that might understand. 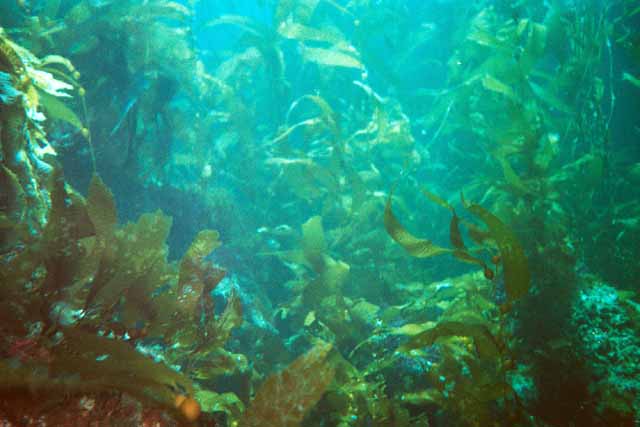 Catalina is near LA, but it is a world away. I met some interesting people
there. Beautiful women, alcky derelicts, old sea salts, that harbor master
with the wild mustache that tells me about weather. One of the most
interesting was a guy I saw standing by the road in Avalon when I went food
shopping. He looked like he was waiting. He looked lonely. He looked like
a tough guy. I've met the kind before. Horsemen made of bone, muscle and
leather. A miner as hard as the rock he cut through, wrenchers as tough as
the metals they use for their creations, climbers with legs of granite, a
few cops and other men and women that are tough in a way that few athletes
ever achieve. It's about personality and how they approach life. It can be
understood why they are usually alone. There are few that can travel the
paths that they do or who travel for their reasons.
When I passed him again, I again saw that amazing loneliness. I had to
know more. Sure enough, as people tend to, he was willing to tell me. He
was an urchin diver. He spent 10 hours a day or more, 5 days a week, alone
on his boat. The day could be 6 hours or more just diving for sea urchins.
It made him as tough as a shark, but it was more than the solitude that made
him lonely. It was loneliness that made him seek solitude. Maybe it was about
a girl or a mistake. I'll never know why, but I knew he was one tough
guy.
There were many other people that I met and still remember because I learned
something of their story.
.
The Raider is gone now, but the time to dive the Raider is not past. The
diving goes on and the divers are still diving. There will be other boats with
different names, but the spirit will always be the same. The plans are already
made. Maybe I'll tell those stories too. It is about people, diving and a state
of mind. It is a story of people that are made complete by their time in the
sea where the Raider took them. It is a time to dive. 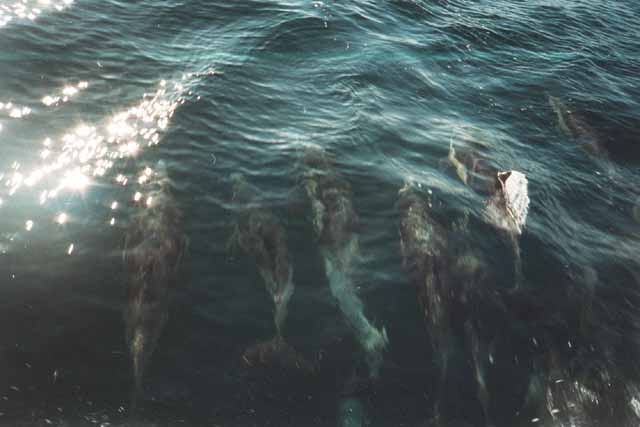