On Saturday October 16th the Pacific Star departed from Redondo Beach on a 10am to 10pm "open boat" trip to Catalina Island. I like these trips because they include 4 dives, two meals, extra sleep in the morning, and some night diving. During the first two dives I had some great critter encounters that made this day extra special.

The first dive of the day was at Johnson’s Rock. It started out as a normal Catalina dive. There were rockfish resting in the kelp, and, some nice gorgonians. I followed the reef to the deeper sand to see what I could find there. Mostly it was large schools of blacksmith.

Not finding much else suitable for wide angle photos, I turned around to start a very slow assent up the reef back to the boat. As I looked ahead to try and pick an interesting path, something unusual REALLY caught my eye. Not more than 10 feet away was a sea turtle. Wait a minute....A SEA TURTLE....I definitely needed to get some photos of this. Almost the second that I saw him, he saw me, and he started to flee. A short chase ensued. I swam as fast as I could go in my dry suit and split fins. These are the photos that I was able to grab before the turtle won the race.

I’m not certain what kind of sea turtle it was, maybe a green one.

For the next dive we moved around the corner to the "back side" of Catalina. Captain Scotty checked out Eagle Rock as a possible stop, the visibility here was terrific, but the current was not so terrific. 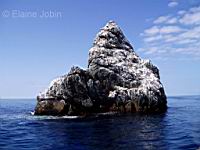 We passed on a dive at "the rock" and headed further around the bend to West End Cove.

At West End Cove I swam over the reef and headed for the sand. Some large schools of Mackerel and Blacksmith kept me entertained with photo opportunities.

I followed the group of sea bass until I noticed that I was in a pretty strong current.

I checked my dive tracker and found that I was behind the boat and off to the right.. Darn, I try never to let that happen in a strong current. I couldn’t make any headway, and, I had to start getting shallow to stay out of deco. Once again, it was kelp to the rescue. I grabbed a plant and started my ascent, traveling up and cross current until I could grab the next plant. After about 15 minutes of "kelp hopping" I was finally getting some rest on a safety stop under the swim step.

The last afternoon dive and the night dive were near Arrow Point. Once again there were huge schools of fish.

My favorite photo from the night dive was of this little crab.

Gregg also showed off his glove that had taken a bite from an eel, fortunately, the small puncture marks didn’t break the skin. .

After the night dive it was a quiet and restful "Miller Time" as we headed back to Redondo.

Everyone thanks Michael for the great food. Several people wondered aloud if the Pac Star was a dive boat or a restaurant. Really nice job.

Usually the late trip home is a breeze - no traffic. Tonight there was a sig alert on the 605, no one moved for an hour. I was thankful that I had lots of gas, didn’t need a port-a-potty, and wasn’t part of the cause. 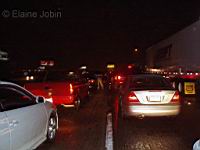