On Saturday November 8th, 2004 I went to the California offshore oil rigs Eureka, Ellen and Ellie on the Sea Bass with the Whalers Dive Club. I am not a member of this dive club, but, I saw the post of available spaces, so.... I signed up. I have a really hard time passing up a trip to the Oil Rigs

The crew welcomed us aboard and Captain Richard gave us our dive briefing. If you didn’t have a safety sausage and a whistle you automatically received a loaner. 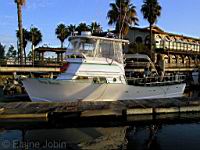 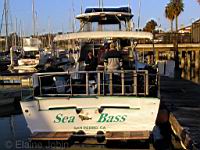 The air compressor provided the entertainment during the half hour trip to our destination. It took some extra juice to get it up and running 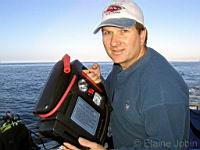 Our first stop was at the Oil Rig Eureka

As we jumped off the boat we were amazed at the terrific visibility. It was easy to see all of the way across the Oil Rig and then some. However, once inside the structure, visibility would sometimes drop drastically to about 10 feet. The reason for the sudden change was that there were too many flipping fish. The huge bait balls seem to have grown even larger since I was last here about two months ago. When I found myself in the middle of these swarms of schooling fish, they were so densely packed that it was impossible to see anything - but fish. Spending time in a bait ball is a lot of fun, but, it can be a little disorienting. There are no reference points.

I was able to make a few escapes from the bait balls to actually get some photographs of the Oil Rigs.

On the second dive we stayed at Eureka. I opted to try some black and white slide film, Afga Scala 200. The Scala requires special processing and it won’t be back until next week.

On the surface intervals I got to meet some of the friendly members of the Whalers Dive Club.

Our next stop was at the Oil Platform Ellen and Ellie 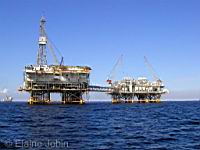 Visibility here wasn’t quite as good as it had been at the Eureka, but it was still at least 80 feet. Large schools of fish were present as well as a Mola Mola. This Mola was a bit shy and I found I couldn’t get very close to him.

Also on this dive I had a close encounter with a diving bird. I was behind a piling and I guess that I startled him as he swooped by. He came to a screeching halt, he looked at me and I looked at him. He backed into the piling as I tried to grab some photos. Then he quickly made the run back to the surface. He is in the lower corner of the pilings trying to get the heck away from me in the following photo.

I’m not sure that I’d ever make it as an underwater bird photographer.

I ended my dive day in one of the comfortable blue deck chairs eating chocolate chip cookies. Sometimes it just feels good to indulge.