Only three divers signed up for this trip, Yippee!!! Captain Gary welcomed us aboard and we left San Pedro for our first planned destination; the Oil Rig Eureka. 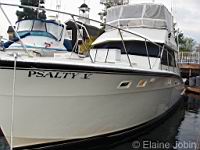 When we arrived at the Eureka, our crew member Lars realized that he might have a serious problem on his hands. 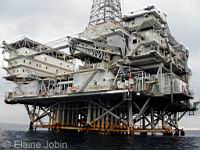 So what was the problem? My dry suit is still in the repair shop. I didn’t want to miss this dive day so I brought along a wet suit. It isn’t one of those nice custom made wetsuits, but an off the rack, what I consider “for emergency use only” wetsuit. Capt. Gary and Lars assured me that if I froze to the rigs they had an ice pick. More importantly, every time I got out of the water, my dive coat, my freshly filled hot water bottle, and something warm to drink would appear. They couldn’t help but notice (with amused smiles) that every time I got into the water I would start screaming. Thanks guys for looking after me. Now you know one of my biggest secrets, I’m a wet suit weenie.

Visibility on the Rigs wasn’t as good as it had been a few weeks ago. You could see across the rigs, but just barely. At about 70 feet the visibility was even less. The huge schools of fish weren’t in the structure, but, you could occasionally see them outside in the distance.

I found diving in a wetsuit to be an experience that I have mostly forgotten. It was hard to remember that I didn’t have an inflator button on my chest and that I had to use the BCD for buoyancy. When I got cold at 70 feet, “adding a little air to warm up” was not an option. Swimming was definitely more streamlined, but I felt very out of balance. Adding my ankle weights on the second dive did help with stability. Without them I was like a teeter totter.

These are some of my photos from the Eureka.

For our two dives here, the sea lions provided some big animal entertainment and a somewhat camera shy Mola Mola came to check us out.

When we moved for our third dive at the wreck of the Olympic the gray skies kept getting grayer. Fortunately, the ocean stayed calm.

The Olympic was a dark dive due to the overcast skies; but, the visibility here was better then I have ever seen it. You could go where ever you wanted among the wreck debris and still see the anchor line. There is some tall structure at one end, some collapsed debris in the middle, and some intact structure at the other end. I’m not going to guess which end was the bow. I did notice that some things I had photographed here before were missing. I don’t know if divers have been pillaging this wreck or if it is due to natural decline.

The short boat ride back to San Pedro ended another great dive day. Even in a wetsuit!