On Sunday January 2, 2005, I went on the Sundiver open boat to Catalina.  There were some small swells and cloudy skies, but, it was mostly a day between our winter storms.

I like open boats because you never know what the mix of divers will be.  On this trip diversity ruled.  There were lobster hunters, recreational divers, and "techies".  I think that I was the only photog.  Some of the "techies" came equipped with doubles, stage bottles, and scooters. 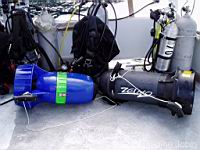 It must be difficult to plan a dive trip that will accommodate all of these different interests.  Captain Ray seems to have a knack for this though.  Our first dive site was near Rippers Cove.

At Rippers, a weighted down line with a float was placed in about 140 feet of water.  This is where the techies and some lobster hunters jumped off.  There was a huge boulder here that was the "dive site".  The divers said that the boulder was covered with gorgonians and was quite beautiful.  It was also a lucrative lobster site. 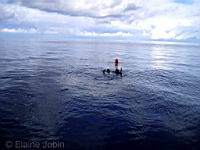 After the first group entered the water and had safely found the down line, Captain Ray anchored the boat a short distance away near another, shallower huge boulder.  This is where the rest of us did our dive.

When I jumped in, I had forgotten to connect the inflator hose to my dry suit.  When I reached for the stray hose, I dropped my camera.  When I plugged in the hose, I watched the camera sink quickly out of sight.  Without the weight of the camera it is harder for me to sink but I was sufficiently motivated to overcome the extra buoyancy.   I was lucky and located my camera almost immediately.  It was sitting at 120 feet, upright and undamaged in the sand.  It was being inspected by a Sheep Crab.

Next to the camera was the huge boulder that was our dive site.  The top of the boulder was at about 80 feet.  It had some kelp growth, some Spanish shawl nudibranchs, and a variety of small fish life.  After the dive I ran into Bob and Carol on the anchor line.  They had started the dive at the first drop site and ended the dive with a deco stop under the boat.

We picked up all of the divers and the down line and went to our next dive site - Goat Harbor.   The tech set and scooter crowd spent much of their dive searching for the small plane that went down here a year or so ago.  I stayed in the shallows and explored in the kelp.  No one saw the remains of the plane.

After this dive we moved to Torqua Springs.  A sailboat was beached near this site.   It was probably a victim of the last storm. 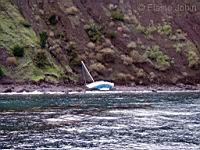 The visibility at Torqua Springs was the best of the day - at least 50 feet.  It was a beautiful dive.  The plant life was thick and lush.  There were many large schools of fish.   I found a big eel tucked away in the rocks.  I traced his body through the cracks and he was at least three and a half feet long.

Unfortunately, I had brought my macro setup on this dive.  This was the best wide angle site of the day.  However, I found a swell shark egg,

and I photographed some of the plants - the kelp, the sargassum, and the red algae.

On some of the kelp leaves I noticed these round fuzzy things.  I haven’t had time to look them up yet.  Does anyone know what they are?

We watched some heavy storms in the distance on the way home.  The ominous clouds over Long Beach were an indication of storms yet to come.

Another great dive day was over.  When I think about it during this rainy week I can’t really remember.....was it on the Sundiver or the Fun Diver? 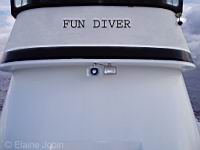