Story and Photos © Elaine Jobin.
Story/Photos may not be reproduced without written permission.

On Saturday February 26th, 2005 I attended the annual Avalon Harbor Cleanup. This huge scuba event is held each year on the Saturday following President’s Day.

Long before dawn, I piled into the divemobile, picked up some gas, and headed to the Queen Mary Catalina Express Landing. The stop for gas made me a little bit late, but, I arrived at the ticket counter at about 8 minutes past 6:00. Only two other people were still in line. One person was arguing fiercely with the ticket agent. "I’ve got to be on that boat. I want to take part in the dive. I bought all new dive gear; let me talk to the supervisor."

The boarding plank was still down and the Express boat was still moored to the dock. If they would just process our reservations, there was plenty of time to get on the boat. It could have easily been accomplished in less time than it was taking to watch the pleading passenger and the unyielding supervisor. However, the longer that I watched, and listened, the clearer it became that this simple solution wasn’t going to happen. The guy that was arguing with the supervisor was getting no where. I realized that I wasn’t going to be going anywhere either. I figured that the boat must be full. Boy, did I blow it by being late.

The ticket agent said that I could have a spot on the next boat. I explained that I needed to be on the first boat and that having missed it, I didn’t even really need to go at all The ticket agent said "well, fine, but if you don’t go we are going to still charge you for a reservation not cancelled in advance." What a *&$%## I thought. I had needed to arrive on the early boat because I was supposed to participate in the event by being a part of the "Kayak Patrol". 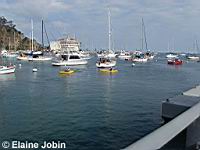 The members of the kayak patrol are out in position before the dive begins. They try and protect the divers from boat traffic, they assist tired or distressed divers, they help with any heavy trash, and, they try to keep divers from traveling underneath the Catalina Express dock. If divers wander under the dock - the express can’t run. 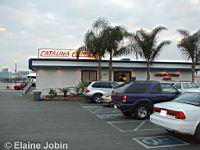 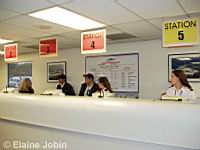 I went with the other unhappy traveler to the helicopter terminal. Maybe we could catch the 15 minute whirly bird ride to the island. This option would still get both of us to the clean-up on time. A one way chopper ride costs $80, but, what the heck, I’ve never been on a helicopter before. The ticket agent at the helicopter was extremely nice and understanding of our situation, but, she had no available space to offer us. 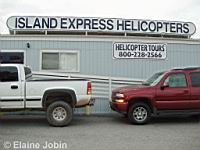 We walked back to the Catalina Express terminal and opted to take the 8:30 departure to Catalina. We were sad that we would be late, but, at least we could still be out there for the event. This is a photo of me gritting my teeth on the 8:30 boat. I was madder with the Catalina Express when I later learned that the boat that they had prevented us from boarding had only been 2/3 full. 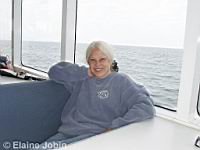 I missed my opportunity to participate in the kayak patrol, but, I did have lots of time to take photos. The Avalon Harbor Cleanup is the only time of the year that divers are allowed in the harbor, so, it is the only day of the year that you can get photos like these. 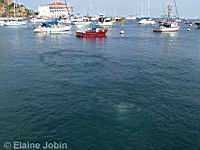 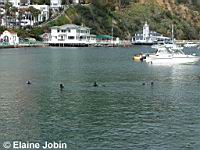 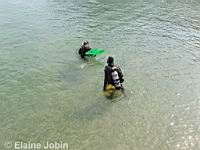 Eventually, people began emerging from the water, some with full bags of trash. 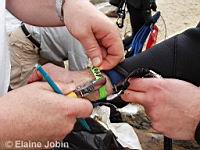 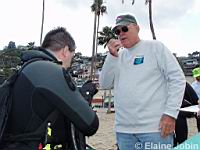 Some trash was everyday garbage. I don’t know exactly how much was collected, but it was a lot. The harbor has got to be much cleaner after this event. 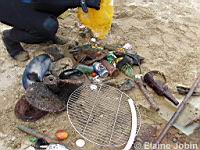 Some trash was a little more interesting. Divers hoped to find something of value that they might want to take home, or, something that might be unique enough to win them one of the trash awards (oldest trash, nastiest trash, most unusual trash, etc.) to be presented later in the day. These are photos of some of the more interesting trash. 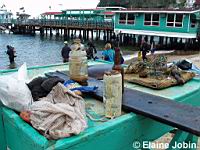 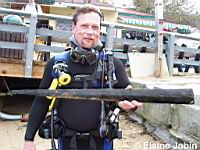 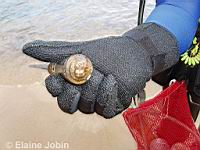 The trash pictured in the last four frames above did win awards at the trash award ceremony.

After the dive, everyone had some time for lunch and to look around Avalon 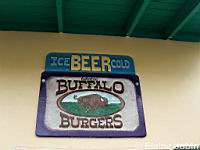 Then everyone gathered together for the awards ceremony and the raffle ticket drawings. 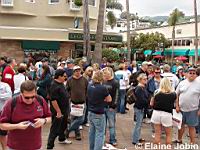 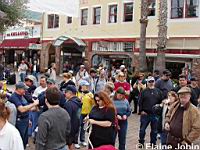 The trash awards were wonderful mosaics made by students at Avalon High School.

Ken Kurtis MCed the Silver Tongued Liar contest where divers vie with each other for who can make up the best story about their trash. Ken also made some announcements about the upcoming Chamber Day Event to be held in May.

Throughout the awards ceremony the raffle prize winners were announced.

As usual, there were some great raffle prizes this year. Sponsors included Aeris, the Catalina Island Museum, the Catalina Island Inn, Hammerhead Press, Pelican, Beverly Factor, Sea Cure, Joe’s Place Restaurant, Sally’s Waffle Shop, Cloud "7" Hotel, Catalina Island Vacation Rentals, Honda Federal Credit Union, Sea Dreams, Subsalive, the Bottom Scratcher, Chammyz, Dive boat Aquatica, Hirozon Charters, Catalina Scuba Luv, Catalina Divers Supply, Scuba Pro, Truth Aquatics, Ikelite, Deep Outdoors, scuba.com, Catalina Cylinders, OMS, Cochran Consulting, ScubaPro/UWATEC, JW Fishers, DEPP, and many more who I don’t want to slight just because I can’t remember everyone off the top of my head. The prizes were amazing and every diver thanks the sponsors profusely. The prizes donated by the sponsors are one of the things that make this event so successful and so well attended. The diver’s thank you, the event organizers thank you, the marine life of Catalina Island thanks you. Thank you, thank you, and thank you. 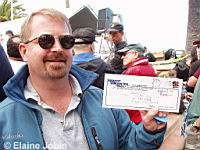 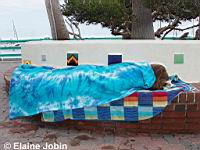 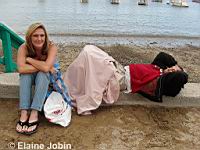 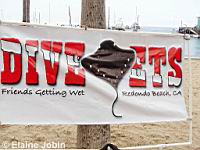 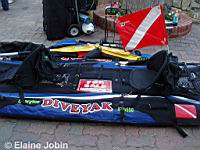 If you didn’t make it out there this year, be sure to put it on your calendar for next year.

I headed back on the Catalina Express. They have a great TV monitor system on the boat. I was hoping they would put on a dive related movie. Instead we watched a half hour of the Oreck infomercial followed by "All in the Family". The Catalina Express is the only game in town now, and, maybe it is showing. 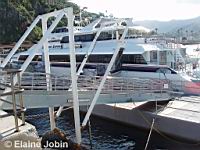 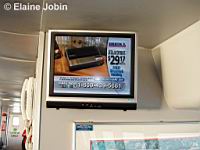 Until next time..... (Which if the weather holds is the Sea Divers trip to Nic. next weekend) Remember not to litter in Avalon Harbor - that is unless it is your oldest coins and your most beautiful jewelry. 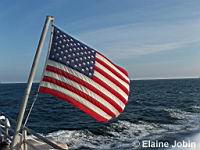