The Sea Divers Trip to

Story and Photos © Elaine Jobin. May not be reproduced in part or in whole without advanced written permission.

We boarded the Peace on the evening of May 4th. My Thursday evening commute, from home to Ventura, took me through several heavy, cloud bursting, rain storms. I sat in traffic wondering what kind of dive trip lay ahead. By the time that I arrived at the boat however, the weather had completely changed to clear and mild. Everyone was optimistic that we would make our planned dive destinations.

Chris Grossman showed us his new toy. He was taking his housed Olympus 8080 digital camera system on its maiden salt water submersion.

The overnight ride to San Miguel Island was mostly a smooth one. At sunrise we were almost at our first dive site, and, we saw that it was going to be a weather perfect dive day.

Our first two dives were at the pinnacles known as "Boomerang" and "Wilson's". The water looked a little green and there was some mild current and surge. Captain Eric announced that the diving conditions should be good at depths greater than 60 feet, and, that is exactly what we found. The anemone covered landscape combined with 50 feet of visibility was eye popping. Photographers began their hillside strobe light show and those choosing to hunt set off in search of scallops or rockfish.

After the pinnacle dives we headed for shallower water. Our next three dives were at "The Canyons", "Shark Park", and "Wescott Shoal". "The Canyons" had some beautiful swim throughs and sand channels. "Shark Park" had no sharks but did have lots of fish and some sea lions. "Wescott Shoal" had interesting terrain and some huge sheephead. I opted to shoot macro and close up on these dives and got lots of photos of nudibranchs. I also found an orange sea cucumber that I have never seen before

Those who were hunting brought up several good size fish.

After five great dives, we began our journey toward the Oil Rig Grace and anchored in a cove off Santa Cruz Island for the night. Day two began with the bright chipper faces of dedicated divers.

As we approached the Oil Rig Grace, Captain Eric herded everyone into the galley for a detailed briefing. Then we waited for a supply boat to clear the rig.

Next Capatin Eric maneuvered the boat for the transfer of the candy bag containing the "diver list". A satisfied nod from the rig official in the yellow hat began our dive day.

Eager Sea Divers prepared for the live boat drop off the bow.

Visibility on the rigs was probably at least 80 feet on the first round of dives. Wow, perfect conditions!

By the second dive, visibility had decreased to perhaps 50 feet and a mild current had started to run. I spent this dive searching the columns for macro subjects and came up with lots of nudibranchs, anemones, and barnacles to keep my shutter finger happy. I spotted a few blennies darting briefly out of the safety of their empty shell homes but I wasn't fast enough to photograph them. Tiny shrimp were present by the billions and climbed onto our wet suits and dry suits at every opportunity. Even the yellow nudibranch in the photo below was wearing a small shrimp.

During my safety stop I found a nudibranch that I had not seen before. He was a challenge to photograph due to considerable surge. An email to Michael Miller at the Sea Slug Site helped me to identify him as a Triopha maculate or spotted triopha. This nudibranch has many different color variations that can make identification confusing.

Next, we went to Anacapa Island for our last two dives.

This is also where Chris and I found the Gurney's Sea Pen at about 90 feet. Chris took the wide angle photo and I did the macro. 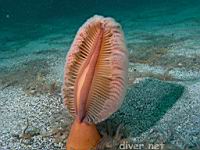 Our last dive was at "coral Reef". Captain Eric said that there are only a few times a year when this site has good diving conditions and today was one of them. He cautioned us that strong currents are common and that they could come up during the dive. We were lucky and had a nice easy dive to end our tirp.

Of special note on this trip:

When we arrived at the Harbor, the storm runoff was a stark contrast to the beautiful diving conditions that we had had out at the islands.

Captain Eric and the Peace Crew - you did another flawless job of keeping us pampered, well fed, and entertained for two awesome days. Thank you so much for everything.