... or forget the stupid otters

This was the third and last dive of a great day of San Diego
diving. Conditions were great as we ate lunch on the way from the
Ruby E to the kelp beds off of Point Loma, San Diego. 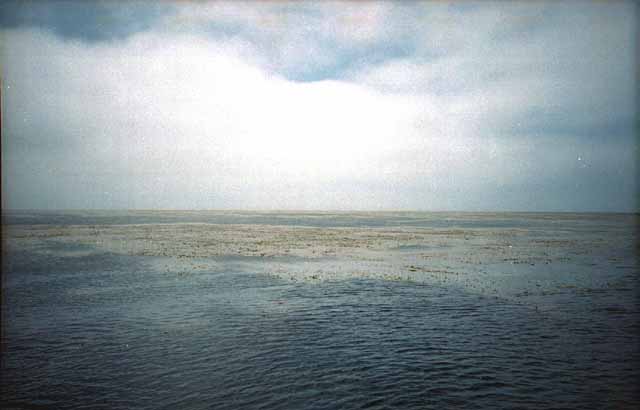 The crew filled tanks as we progressed about half way down
Point Loma to an area about 1/2 mile off of the Strategic Naval
facility. We were only about half way to the outer edge of the kelp bed. By any
standard, the Point Loma kelp bed is a huge kelp bed, miles long and near a mile
wide in places. It's not solid though. There are large solid paddies as well as
more open areas. The skipper anchored in an open area with a very thick paddy
starting about 50 feet behind the boat. The briefing described different conditions
in front and behind the boat. The bottom was supposed to generally be at 50 feet,
with a great deal of relief.
.

.
I did a 'tiny' stride entry, keeping my feet together and letting my fins
fold up. Almost instantly I was just above the bottom at 30 feet.
Now generally, I say that I like the diving at the Channel Islands and farther
north a bit better than San Diego. The Channel Islands more frequently provide
good dive conditions, but today was good conditions and really, this is such
a healthy, diverse reef, swept by cold nutrient rich waters that it would be
very hard to beat for beautiful, interesting diving. It's just that those same
nutrient rich waters may not as often provide diving conditions as good as the
Channel Islands, but when they do, it is great.
.
I immediately saw a Garabaldi protecting his nest and figured I should try for
a few pics, but while he would come close, I just couldn't get a shot ... and
besides it was just a Garibaldi. There would be more. In the shelf behind him
were 2 large scallops, but they were not coming off without an iron. As I moved
on I saw another nice scallop, but that was the last large one of the entire
dive.
. 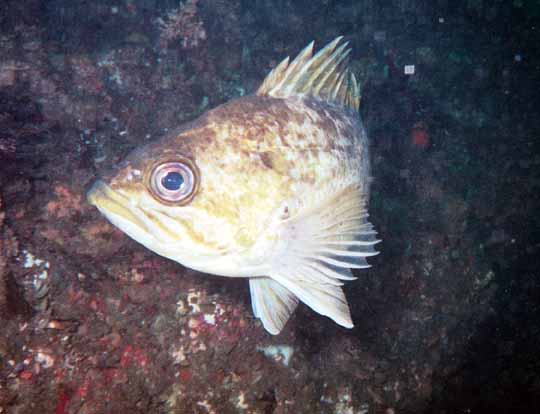 Gopher Rockfish
.
I had come down on the top of a small plateau, so I swam over the side the
flatter rock area to what might be called the primary bottom at about 45 feet.
The entire area is uplifted sedimentary rocks. The rock is all formed in
layers of different density and hardness, though it is all soft rock. Most of
the layers are a couple of feet thick and the layers are easily visible in the
shore cliffs. Every 50 or 100 feet in this area, there is a rocky plateau
sticking up 10 or 15 feet that usually has one dimension or another of 15 feet.
It may be 5 feet long or 100 feet long, but it will usually be about 15 feet
wide. While there is a lot growing from the lowest bottom, including the giant
Macrocystis kelp, the most lush growth is in the currents on these raised areas.
Since the rock layers are of different hardness, many of these plateaus are
undercut. Often these undercuts go back 10 or 15 feet and are plenty big enough
for a diver to go under, but sometimes they stick out so much that you have to
wonder if they are going to fall on you. When you leave the top of one of the
rocks, it's sort of fun to swim straight down the side, following the rocks.
. 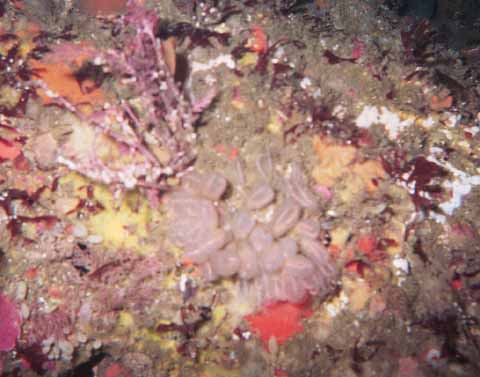 Lightbulb Tunicates
.
All the surfaces are thick with filter feeders and other invertebrates. I saw
numerous Turban Snails bigger than my fist. There were tunicates of all sorts
including colonies of Light Bulb Tunicates. There were all kinds of bryazoans
including Staghorn and bright orange Fluted Bryazoans. There were occasional
huge, many armed purple Picnopodia starfish, ubiquitous Pisasters and small
Blood Stars. I didn't see any feathers or crabs, but did find some cleaner
shrimps back in their hidey holes. There were lots of sponges including large
(slimy) Grey Moon Sponges, beautiful blue Cobalt Sponges, Nipple Sponges and
various yellow sponges.
. 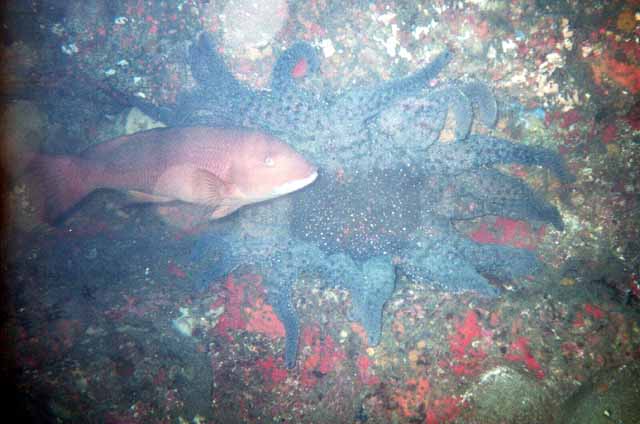 Picnopodia Star (a fearsome predator of the reef) and female Sheephead
.
The dive was mostly a matter of swimming across between the outcrops where the
most life was. There were lots of fish including many Gopher Rockfish
and lots of Sheepheads of various sizes up to about 4 pounds.

I was under one of the large ledges that stick out and there were two
antennas sticking straight down out of a small hole, but I wasn't seeing
many lobster.
.
There were a lot of Purple Urchins as well as a lot of large Red Urchins.
The base of most of the rock outcrops had extensive urchin burrows bored into
them.
.

Lobster. Lots and lots of lobster.
.
The ledges under some rocks were undercut quite a ways, but only one layer
of rock was worn out, so the ledge might only be a foot high, but might
extend 10 feet or more under the rocks. There were always some fish in these.
Then I came to one of these ledges with lobsters in it. In places it looked
like the ledge went back 20 feet or more, but at no point was it much more
than 12 inches high. It was loaded with lobsters though. I counted 90 as I
slowly moved down the ledge. It extended at least 30 feet along the rock face.
I estimate that there were at least 200 lobster in it and while there were
shorts, I suspect that more than 3/4 were legal sized. Some in the back looked
to be 3 pounds, perhaps some 4 pounders. The ledge just went on and on and was
loaded with bugs. There were rock fish in it including some nice sized Christmas
Fish. As I came to the end of the rock, I saw about a 15 pound male sheepshead
in an area of holes.
. 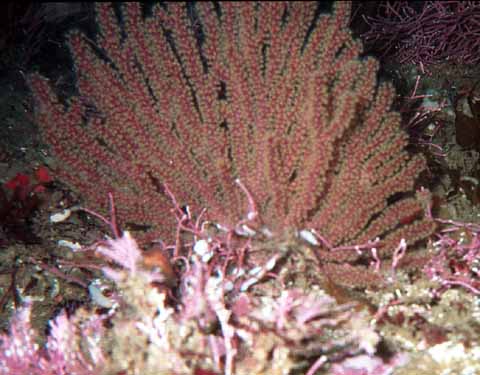 Gorgonian Sea Fan
.
After that, I saw lobsters again only once on the dive, where there were about
8 together under a ledge. I really wasn't trying to cover territory as much at
that point as I was trying to look at the small stuff, catalog the variety and
look for things unique. The growth was really something. I did see a couple of
Spanish Shawl nudibranchs, but no other nudibranch species.
.
Eventually, it was time to go up, but that doesn't necessarily mean that the
dive is over. I was hanging out in the kelp and there were a lot of sardines
going by. I went up and got a bearing on the boat about 200 feet away. I then
went back down to about 10 feet and took a very leisurely swim back, underneath
the canopy. It was beautiful. Even back at the boat it was interesting with
numerous anchovies around the swim step.
.
All in all, it was a fantastic day of diving. I love a ride on the bow of a
boat, passing through calm waters looking at the kelp and the life near the
surface. This was a day to remember.
.