It was an ocean type morning when I got to the dock, cool, grey, and
quiet except for the sound of an occasional bird and the soft lapping
of water. I could see that Dale was already aboard the Hydrodiver. I
had wanted to go on the Hydrodiver for some time, but never had gotten
the chance. It is a six pack and has to be one of the best dive boat
values in San Diego. Dale and I were going to have it to ourselves. I
had met Dale before when I was diving with Eric in Mendocino. He was
a serious diver and instructor who was developing his technical skills.
Divers on the North Coast get experience much faster than most divers
elsewhere. He had contacted me last week and said he would be in San
Diego, so would I like to do a couple tanks in Wreck Alley. Sure. This
was February, so the chances were that conditions would be the best of
the year. The skipper, Jim, who has some very interesting credentials
listed on his Hydrodiver web site, gave a briefing
and we were off. Just the trip through Mission Bay is interesting and,
well, we were on a boat. That's an improvement. It was calm at the
channel mouth, so I figured it should be good diving. First stop was
the Yukon. 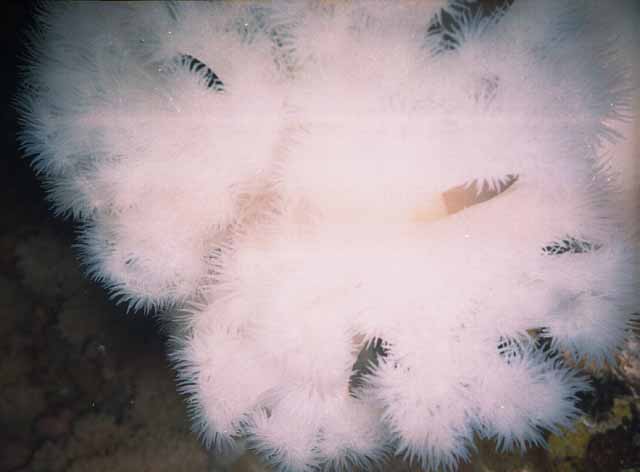 The wreck is covered with beautiful Metridium anemones

On the way, Dale and I discussed protocols and plans. He had only
dove the wreck once and had not seen much of it so I suggested we go
to the port side that was laying in the sand at about 100 feet.
Before the ship had sunk on its side instead of upright, that had
been intended as the main path through it. The so called "Grand Hiway"
went almost from stern to bow through fairly open corridors. Now with
the ship on its side, it was only visited by the people that knew it
was there and went down looking for it. I told him we should be able
to find the gearbox room and the electrical distribution room.
Dale was trying to get in some practice with his technical rig and so
had doubles and a fair sized, slung pony bottle. I was trying my new
close up lens. It was on the last trip I made to Wreck Alley that I
had figured out that my other lens was screwed up.

When we got in the water, it was obvious that visibility was excellent.
We followed the line from the mooring buoy to amidships. The plan was to
quickly go to the stern and enter, but vis was so good that we stopped
to look around the rear guns. The ship is now covered with thick growth
and hundreds of graceful, snowy white metridium anemones. Then I saw a
2 foot plus ling cod just sitting on the hull. I couldn't get my close up lens
off fast enough, but it stayed near enough until I was finished shooting.
There were lots of fish and other stuff to see, but we had to get moving
or we wouldn't be able to enter the ship.

This ling was not very nervous
We swam all the way to the stern and then back a few feet to the first
entry hole. I led the way in. We had both chosen to use small lights. I
think it gives a better effect that way. Inside, there were some fish and
metridiums, but mostly it is just barnacles and crusty algae growth. We
went through a couple of rooms until we got to some machinery and I
signaled Dale to take the lead. The next room was the gear box area. Dale
went in there and I could tell he liked that. I was trying to get a
picture of Dale behind the largest gear that is about 6 feet across. The
next couple of rooms were electrical distribution rooms and are full of
all kinds of junk. These areas are a bit harder to move through and I
could see that Dale's slung pony bottle was making it more difficult for
him to get through the smaller passages. 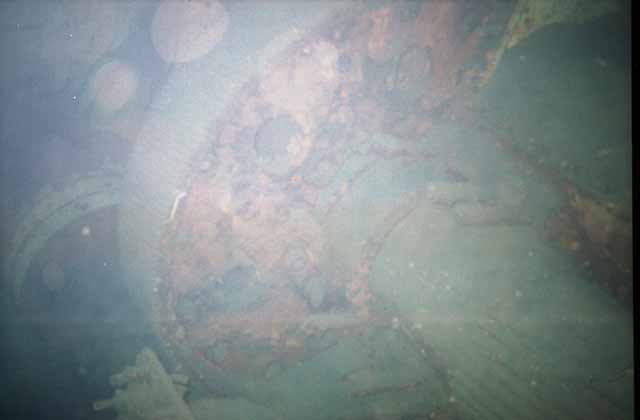 I got a slightly better picture of the gears this time
The Yukon is a Destroyer that is 377 feet long and the dive goes quickly
as you go from room to room. It's really fascinating. As you enter each room
through a doorway, you use your light to see what is really in the room.
There are pipes, valves and conduits everywhere. There are also different
passages and holes going in different directions, most of which you just
have to wonder where they go. We could tell that we were reaching the end
of the line as we were coming to the bow and the exit from the last compartment
was a bit small. Dale worked his way out with a few adjustments of gear, but
had no problem. I saw some small gobies and stayed a while trying to get a
picture of them, but they were a bit shy and would take off just before I
could get my close up lens in range. 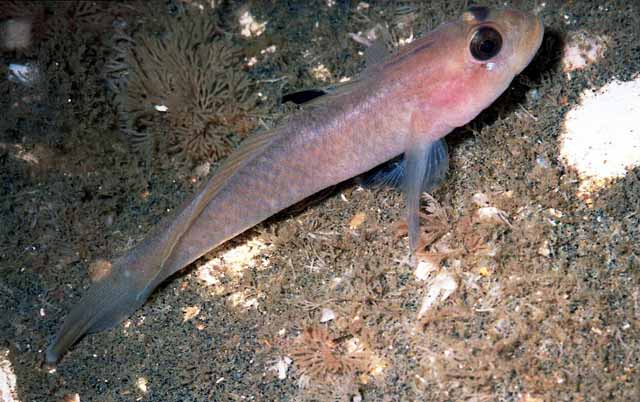 Blackeyed Gobi. This is what my new lens can do... if I can do it
As planned, we went into the bridge, but actually there is less to see in
there than most of the rest of the ship. When we came out, we just went
tooling around looking at things. There were a couple of other divers that
were mostly just swimming around the superstructure. There is so much small
life growing on the wreck that you can look closely at any part of it and
it is beautiful and interesting. I still had some gas, so I swam out along
the lookout mast to the crow's nest. I had never come out/up here and it
not only is overgrown, but with vis like this, it seems a bit surrealistic
being completely on its side. There were some purple urchins out there, as
well as one small red urchin that I saw. 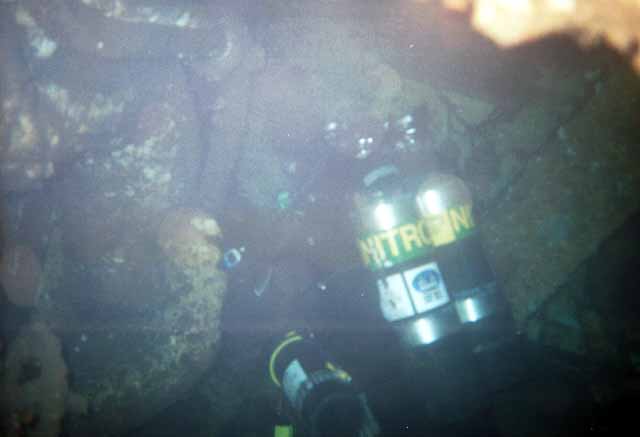 Dale was going to the next room. I suppose I should have told him that
his pony regulator
had come loose from its holder.
It was time to go so we quickly headed across the upper part of the wreck
along the starboard rail. There is a fair amount of kelp trying to get
established there and lots of fish in that. I spotted the mooring line we had
come down and started up that. At the surface we were about 5 feet from the
Hydrodiver. It makes for a very easy dive. It certainly had been an excellent
dive. Dale was jazzed as that had been the exact dive he had wanted to do.

Diving on the Yukon, you really have to appreciate all the work that the
volunteers did in cleaning and preparing the ship for it's role as a diver
friendly wreck. Their work makes the Yukon a very special dive, safely
accessable to most intermediate divers with some caution.

Photography note. I've had trouble taking pictures in the Yukon before and
did this time too as you might have noticed. While it does not silt up in
the wreck, there are a lot of suspended particles which can make for messy
pictures, especially with the camera attached flash I was using. The best
way to get pics there is to have a strobe and hold it away from the camera.
Of course, carrying that through the wreck would be fun too.