Last Friday & Saturday, July 18-19, 2003, Kathryn & I went to Begg Rock, San Nicolas Island, and Santa Barbara Island with the Sea Divers on the Great Escape.
The weather service was predicting 7 to 9 foot seas at 9 seconds. Luckily they were wrong and it was amazingly calm the farther out we got. It was almost glassy at Begg Rock. 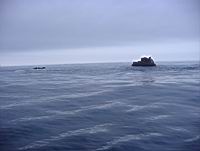 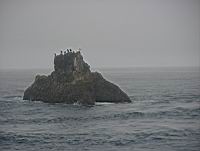 Captain Tim dropped the anchor so it was sitting in 75 ft. and draped over a ledge at 50 ft. Once he dropped anchor we found the current was howling, perhaps 2-3 knots. The crew put out a line from the anchor. Because of the current, most people elected not to take their cameras. However I was very impressed by Dave Gunning who managed to get is large Ikelite SLR housing and strobes down.
Kathryn and I were one of the first ones in. We pulled ourselves up to the anchor and down the line. The water was very green, but full of pelagic life including jellies and salps. When we got to the anchor at 75 ft. the visibility was only 10 ft. at best. At first we explored the area just around the anchor, but then I ventured off the side and down. At about 90ft. there was a dramatic thermocline below which the visibility opened up to at lest 60 or 70 ft, but with a chilly temperature of 51 °C.
For the second dive at Begg I elected to take a reel, so I could duck below the murk and still find my way easily back to the anchor line. I also dumped the BC and wore my backpack so I would have less drag in the current.
Kathryn and I headed down, and I hooked the reel to the anchor chain and we continued down. Just as we headed down we encountered Eric S. returning. He later thanked me for having run the reel so he did not have to search for the anchor.
At 90 ft. the visibility was wide open. You could barley see the life on the pinnacle because the whole surface was swarming with immense schools of juvenile rockfish. There were millions of fish all about 2 inches long. In my many dives at Begg through the years I have never seen anything like this. I bet I saw more rockfish in that one dive than all of previous 20 years of diving combined. Although I did not get many scallops, the immense school of rockfish made this one of my best dives at Begg Rock.
Our next dive was at a spot I found while browsing underwater topology maps. Captain Tim has decided to call it King’s Reef (after Elvis). When we arrived and dropped anchor there was a mild current, so the GE crew again put out the current line attached to the anchor line so we could pull ourselves up, and then down the anchor line.
Going down the visibility was at least 40-50 feet. 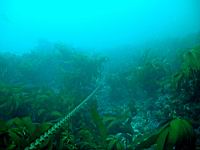 This area is covered with palm kelp and small pinnacles. It is incredibly lush and reminds me of Tanner Bank. It has hydrocoral, but not as abundant as Tanner. 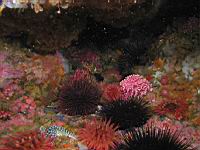 There were many places one might expect to see lobster, but none were home on this day. I did see one very nice lingcod staring out of a deep hole. 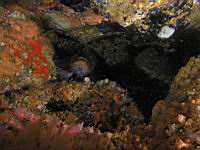 There was so much here it was hard not to get an interesting shot no matter where I pointed the camera. There were anemones of all colors and sizes and nudibranchs everywhere. 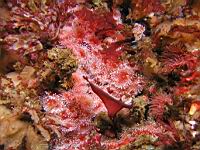 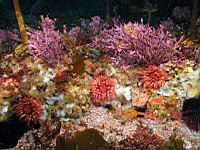 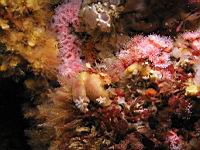 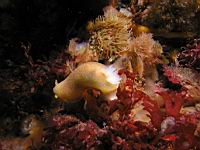 For our next dive we moved to a kelp bed inside the boilers. Here it was calm, but the visibility was only 10-15 feet in the best spots. However I managed a few macro shots like this pair of cowries. 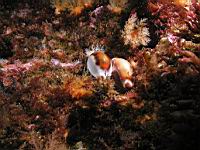 As we moved down the island toward Dutch Harbor the visibility improved a bit each time. At the dive site before Dutch Harbor I got quite a few fish pictures. 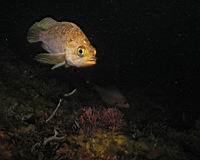 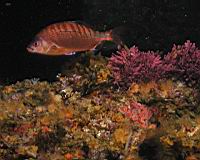 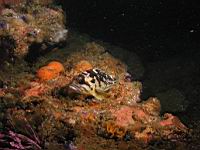 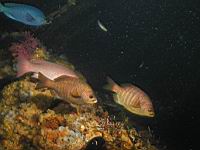 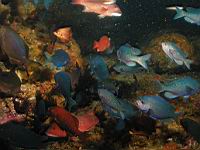 When we anchored at Dutch Harbor a sealion came to visit.

Since no one elected to do a night dive, we left for Santa Barbara Island just after dinner and spent the night near the ranger station.
Our first dive was a Black Cavern. A great dive, but did not get many pictures.
Then our next dive was next to Sutil Island. Here I got several good nudibranch pictures. 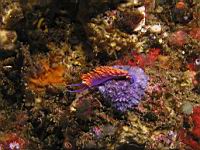 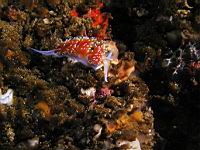 I elected to nap through the next dive, and slept very soundly through it.
For the last dive Captain Tim headed for Shag Rock, and the sealion grotto. On the way we passed the Peace anchored by Webster Point. 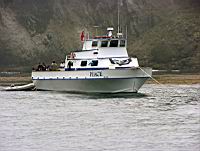 I pissed off this Garabaldi by putting a small blue urchin in his nest. He picked it up and dropped it about 15 yards away. 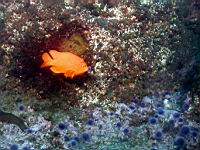 After the dive I took a few pictures of the sealions basking on shore. 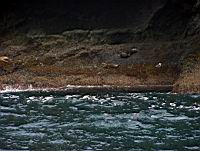 It was a great trip. Begg Rock is always a great dive, and it did not disappoint this time.
You can see all of my pictures from the trip here:
Photos from the Sea Divers Trip to Begg Rock, Nic, and SBI