On Thursday evening the Sea Divers boarded the Great Escape for a two day trip; destination Cortez and Tanner Bank. The previous days had been filled with rain, thunder, lightening, and at least at my house, some hail. Calm clear skies and balmy weather welcomed our arrival to Long Beach. Hot pizza from the galley welcomed us aboard the Great Escape. 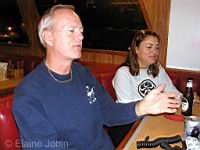 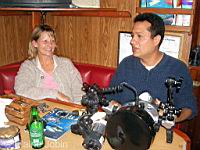 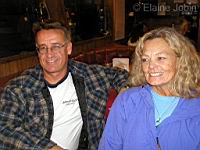 Most divers settled into their bunks for the 10:30pm departure. Choppy seas turned our cozy bunks into mechanical bull rides as we made our way across the San Pedro Channel. Fortunately, somewhere around 2am, somebody ran out of quarters, and, the boat dropped anchor in the calm waters of Cherry Cove off Catalina Island. The early anchorage meant that we would not make our planned destination of Cortez and Tanner Bank. It also meant that the dedicated lobster hunters could skip some sleep and head out for an unscheduled night dive. Shortly after 2:30 am the first lobsters of the trip were brought aboard. 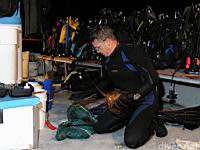 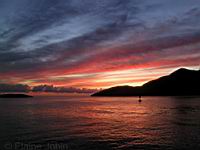 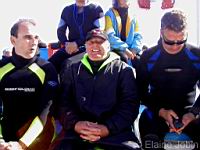 During one of the surface intervals a Zodiac approached manned by wardens from the California Department of Fish and Game. The Zodiac pulled up next to the Great Escape and the wardens asked permission to come aboard to inspect our catch. 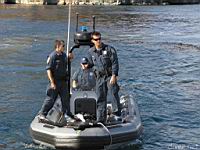 Once aboard, Fish and Game wardens Rojas and Gilbert carefully inspected all of the goodie bags in the game well. They selected the smallest lobster that they could find and demonstrated the proper way to measure a lobster. Fortunately, our smallest lobster was "legal". Chris Grossman demonstrated what a diver might look like if cited for a "short" lobster. A citation would involve a court appearance, a possible misdemeanor conviction, and, a $1,000 fine. Can you pick Chris Grossman out in the photos below?

In the afternoon, we traveled to the backside of Catalina for dives that included Whale Rock and Ribbon Reef. Ribbon Reef was done as a live drop drift dive. Chris and Kathryn distinguished themselves by drifting the greatest distance. Our late afternoon and night dives were at Black Rock. These are some of my underwater photos from our dive day at Catalina.

At Black Rock, DM Larry was all smiles after spearing a yellowtail. I don’t know, do you think his catch is big enough to be "legal"?

A vote after dinner determined that we would spend our second dive day off Palos Verdes. We awoke the following morning anchored near Redondo at the wreck of the Palawan. We were told that the Great Escape was hanging directly over the wreck. The lobster mobsters jumped in and I followed a short time later. On my trip down the anchor line I noticed that I couldn’t get a visual on the wreck. I saw some bubbles and a dive light ahead and swam in that direction. I didn’t see the wreck. At 110 feet I made a large search circle around the anchor line - I still couldn’t find the wreck. I searched under the Great Escape - no wreck. Just as I was about to give up Skylor pointed me in the correct direction. The Great Escape had swung just a little and the Palawan was now off to the left. Short on remaining bottom time, I stayed near the bow section of the Palawan. I dropped to the sand for some upward looking bow shots. It was quite dark, but, visibility was probably at least 50 feet. These are some of my Palawan photos.

Our next dives were typical Palos Verdes reef and kelp dives. This is what most of the humans that I saw looked like on these dives.

I found a large bat ray in the sand. Getting close to bat rays for good photos can be a challenge. This photo sequence wasn’t totally what I had hoped for, but this bat ray was pretty cooperative for a few seconds. One of the photos portrays Gregg M.(author of the "Bug dives on the GE" trip report posted on this website 11-01-04) instead of a bat ray. Can you pick Gregg out of the line up?

Next, we moved for a dive at the wreck of the Avalon. Only a few parts of the Avalon are still intact. I spent most of my dive in and around a chunk of the bow. When I first arrived the interior was heavily silted. I waited quietly inside and visibility eventually improved. These are some of my photos from the Avalon

On this dive, some divers saw a very large Mola Mola under the Great Escape. Unfortunately, I missed that one.

The last dive was a shallow reef dive near Old Marineland. Many nudibranchs, some of which are very uncommon were sighted here. My wide angle was able to catch a Giant Sea Bass who curiously approached several of the divers.

It was a short trip back to Long Beach. The Sea Divers thank Captain Tim and the crew for yet another outstanding trip on the Great Escape. The food, the hospitality, and the relaxed but well run atmosphere really do make the Great Escape feel like a home away from home. 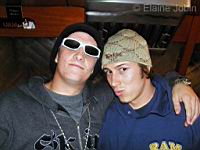 Hope everyone had a happy Halloween. This was our onboard Halloween Cake. 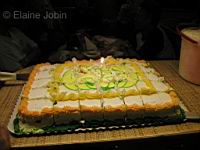 Story and Photos © Elaine Jobin with some topside photos contributed by Chris Grossman.