I had a stressful week at work and wanted to get away for a day. A speedy 6 Pack to Catalina sounded perfect. I boarded the Psalty V early Sunday morning, and, we were soon off for a day of "live boat diving" adventures. 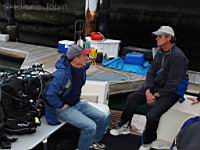 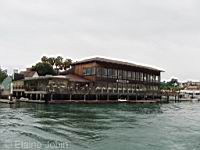 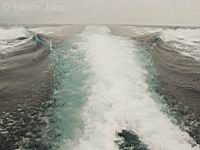 Our first stop was Ship Rock near the Isthmus. 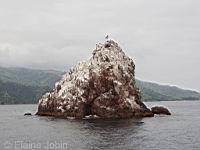 Captain Gary turned us loose without the worry of calculating a return to the boat. Where ever we surfaced - he would come and get us. I splashed off the boat and headed straight for the 140 foot bottom. My plan was to make a slow spiraling assent around ship rock. This was great, it wasn’t going to matter which side of the rock I ended up on when I surfaced. It was a pure sightseeing dive. I went into deco near the start of the dive but by the time I was ready for my safety stop I was out of deco.

At the sandy bottom there were schools of blacksmith and beautiful gorgonians. As I wound my way up I saw several lingcod at around 100 ft. Near 70 ft. I ran into the commercial Sea Cucumber guy. At 50 feet the Garibaldi population increased. Finally in the shallows there were garibaldi, kelp fish, and more schools of blacksmith. It was interesting to watch the marine life change with each successive shallower circle. As I surfaced, sure enough, Gary pulled the boat over to pick me up.

These are some of my photos from this dive. As I later learned, one of the following does not belong at ship rock. Can you pick out which one it is?

The correct answer is d.

Once everyone was safely retrieved from the water we went to our second stop - Bird Rock. On route we watched a whale "spout and tail" display but I wasn’t fast enough to get a photo. 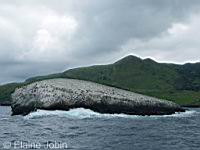 Bird Rock was a little bit crowded. We saw the Pacific Star, the Magician, and the Great Escape all lined up along the reef. To avoid picking up any of at least 80 assorted divers by mistake, Captain Gary dropped the anchor on this dive. (Hum, pick you up and deliver you back to your designated boat - that’s a dive service no one has thought of yet. It would definitely end those annoying surface swims.)

On this dive I saw lots of fish but what caught my attention was pair of Painted Greenlings that I think were mating. The lighter colored female would perch next to a rock and the darker colored male would swoop at her. The swoops were so fast that it was hard to get a photo. The first photo below is the best "swoop" that I could catch and the second photo is the male.

After a relaxed surface interval we headed around the corner for Sea Fan Grotto. 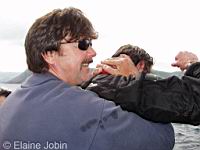 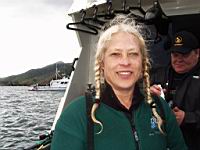 At Sea Fan Grotto Capt. Gary dropped us at the west end with a planned pick up "where ever" to the east.

I swam a brief distance into one of the caves but didn’t find too much in there of interest. Next I headed to the sandy bottom and saw a cool light tan sea cucumber. A torpedo ray was resting a short distance away from the cucumber. The torpedo ray let me take several photos and then took off for more peaceful ground. As I headed east I passed a discarded weight belt and a lawn chair. My dive ended near the shallow area of sea fans that Sea Fan grotto is famous for (although I never found the exact spot).

After Capt. Gary plucked us all from the water we had a quick trip back to San Pedro. Another great dive day was over. (A day that would have been a little more relaxing without the "cucumber man" - see previous post dated 3-14-05). Thanks Capt. Gary for a terrific day.